Four years after Thomas M. Wright made his film debut at the Melbourne International Film Festival (MIFF) with Acute Misfortune, the director is back at his hometown festival with the Australian debut of his second movie. The Stranger had its world premiere in Cannes earlier this year, where it was met with a seven-minute standing ovation.

“It’s a great thing to be part of this,” says Wright, whose tense crime thriller will screen at IMAX, which is a major MIFF venue this year. “The festival this year is 70 years old, and Cannes is only 75. We have one of the oldest film festivals in the world with such a rich history and I hope people really embrace it.” 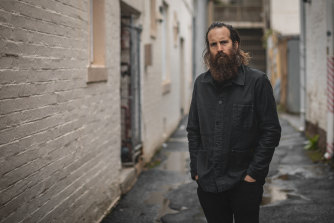 Thomas M. Wright in a laneway in Collingwood, near where he grew up and where he launched his Black Lung theatre company before seguing into film.Credit:Scott McNaughton

Wright’s film is inspired by the manhunt for Daniel Morcombe, the 13-year-old who was abducted in Queensland in December 2003 and whose killer was convicted 11 years later after one of the most extensive and expensive investigations the country has ever seen. But it’s a fictionalised account that doesn’t show the boy or the crime, focusing instead on the relationship between the suspect (played by Sean Harris) and the undercover cop who befriends him (Joel Edgerton).

Wright, who founded theatre company Black Lung and worked as an actor before turning to film when he realised “this is the only thing I ever wanted to do”, says fictionalising the tale while staying close to the reality of the manhunt was “a moral choice”.

“I felt I had no right to depict that child and no right to presume anything about what that family actually went through,” he says. “I also had no interest in representing the real person responsible for this thing.”

The Stranger was the first Australian film invited to compete in the prestigious Un Certain Regard section at Cannes since Rolf de Heer’s Charlie’s Country in 2014. Now it is also in contention for MIFF’s brand new Bright Horizons Competition, which is open to first- or second-time feature directors and carries a cash prize of $140,000. 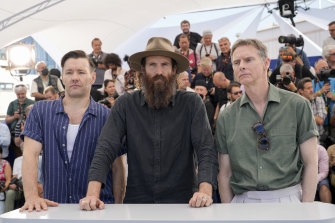 Wright, centre, with Joel Edgerton and Sean Harris at the Cannes film festival in May.Credit:Petros Giannakouris

It will compete alongside 10 other films, including the winner of the jury prize at the Berlin Film Festival, Robe of Gems, and Aftersun, a story about the fragility of the father-daughter bond, which premiered at Cannes and stars Normal People’s Paul Mescal.

For Wright, who describes himself as “a very private person”, the experience of having his film debut at the world’s most famous festival with all its attendant hoopla was overwhelming.

“I really am only interested in the film and the filmmaking itself,” he says, adding that as he stood onstage in front of 1200 wildly applauding people, “I basically just atomised, I turned into a column of smoke, I didn’t even know where I was anymore.”

He should have no such concerns when his film screens at MIFF, though.

“There’s a lot of reasons to play a lot of other festivals in the world, but there’s only one reason to play or to attend MIFF and that’s because they love cinema,” he says. “The city comes alive a little more with MIFF.” 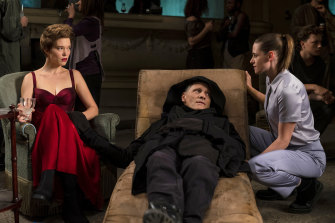 There will be 257 features, 102 shorts and 12 XR (extended reality) works at this year’s festival, with 18 world premieres, 177 Australian premieres and 61 titles arriving from Cannes.

Among the likely highlights are the first film from David Cronenberg in eight years, Crimes of the Future; Decision to Leave, the film for which Park Chan-wook won the best director award at Cannes; the Dardennes brothers’ Tori and Lokita; Claire Denis’ romance-thriller Stars at Noon; and Triangle of Sadness, the latest work from the always-divisive Ruben Ostlund.

But for Wright, it’s the home-grown work that he most hopes audiences will embrace – and with 11 Australian features debuting through the MIFF Premiere Film Fund, in addition to his own work and George Miller’s Three Thousand Years of Longing, there’s plenty to choose from.

“Culture has never been more international, but the particularity of work made in the place you’re from is really important, and it’s important to see it echoed back to us,” Wright says.

“Melbourne in the winter is the embodiment of the city for me,” he adds. “And I’m just thankful we can get back to people being in the cinema. The value of a communal experience is real.”

After decades toiling in relative obscurity, Goran Stolevski is finally an overnight sensation. His feature debut You Won’t Be Alone, a horror film made in Serbia, played to raves at Sundance in January; his second, the gay coming-of-age tale Of an Age, is the opening night film. Both will be well worth catching.

Alena Lodkina’s Strange Colours was one of the most eye-catching Australian releases of 2018. Her second feature, Petrol, trades opal mining in the outback for performance art in Melbourne but should be no less bewitching.

A female journalist in Iran tries to track down a serial killer believed to be doing Allah’s work by dispatching sex workers in Holy Spider, a chilling tale based on a true story, from Denmark-based Iranian director Ali Abbasi.