After cheering on three children through year 12, Michelle McGregor decided it was time to let herself be a little bit "selfish".

So as her son set off for schoolies last year, the Sydney mother-of-four was planning a "moolies" trip of her own with nine fellow school mums. 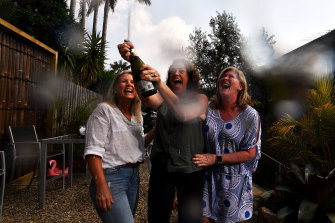 The group of women, who had been friends since their kids were in kindergarten, flew to Bali at the start of 2019 for a week of cocktails, massages and reflection on the highs and lows of the last 13 years.

As moolies season fires up for the parents who supported kids through their gruelling last year of school, an increasing number of parents are flying out for their own party.

"It brought year 12 to an end in such a beautiful way," Ms McGregor says. "You've all had that common bond of making sure your kids are safe and happy."

The concept of "moolies" – and sometimes also "doolies" for dads – is growing in school circles, and it has led to travel businesses offering packages tailored to the trend.

She says most mums are choosing to go at the same time as their kids are on schoolies, while others, like Ms McGregor, prefer to go after the madness of Christmas.

Ms McGregor, 51, views "moolies" as a way to unwind after dealing with the pressure of year 12 exams because while a huge amount of stress is heaped on the child, it also seeps into every facet of home life.

She says in her experience, mothers often do the bulk of the care throughout school and then take on a lot of the mental load during final exams in trying to create a comfortable and supportive environment for their child.

"The stress is palpable and is shared amongst everyone that lives in the house, even the dog," she says.

Ms McGregor says it was special to be able to somewhat parallel her son's schoolies trip and celebrate his achievements alongside him. 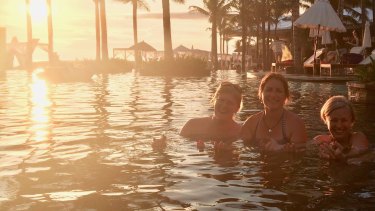 Michelle McGregor with Heather Campbell and Leesa Russell on their ‘moolies’ trip in Bali.

She wishes she'd done "moolies" when her first two children finished year 12, but says she hadn’t yet learnt it's OK as a mother to not always be selfless.

"The time you give yourself is so beneficial to your own mental health … my children were happy for me as well,” she says, adding she hopes to do moolies again when her 13-year-old daughter finishes school.

Ms Anson says in her work, she is finding more mothers are getting on board with giving themselves time out they deserve.

"It's stressful running a household and raising teenage kids and working, so parents are becoming more aware it’s OK to take time out for yourself," she says.

Psychologist Salle-Anne McCormack says the end of year 12 can be "very stressful for everyone in the family".

"When a child is very stressed and highly emotional at this end of the year, it has an impact on every member of the family," she says.

Ms McCormack says some mums might feel the pressure more than dads if their role, in their view, is to nurture, provide emotional support and manage everyone else’s stress.

She believes viewing "moolies" as a rite of passage like schoolies would be "over the top", but she says it's great for parents to be able to sit back and reflect with their friends.

"Parents need to have support networks as well so I think that’s lovely."

Related posts:
12/07/2019 Lifestyle Comments Off on Forget schoolies: Meet the ‘moolies’ letting loose once their children graduate
Recent Posts
We and our partners use cookies on this site to improve our service, perform analytics, personalize advertising, measure advertising performance, and remember website preferences.Ok