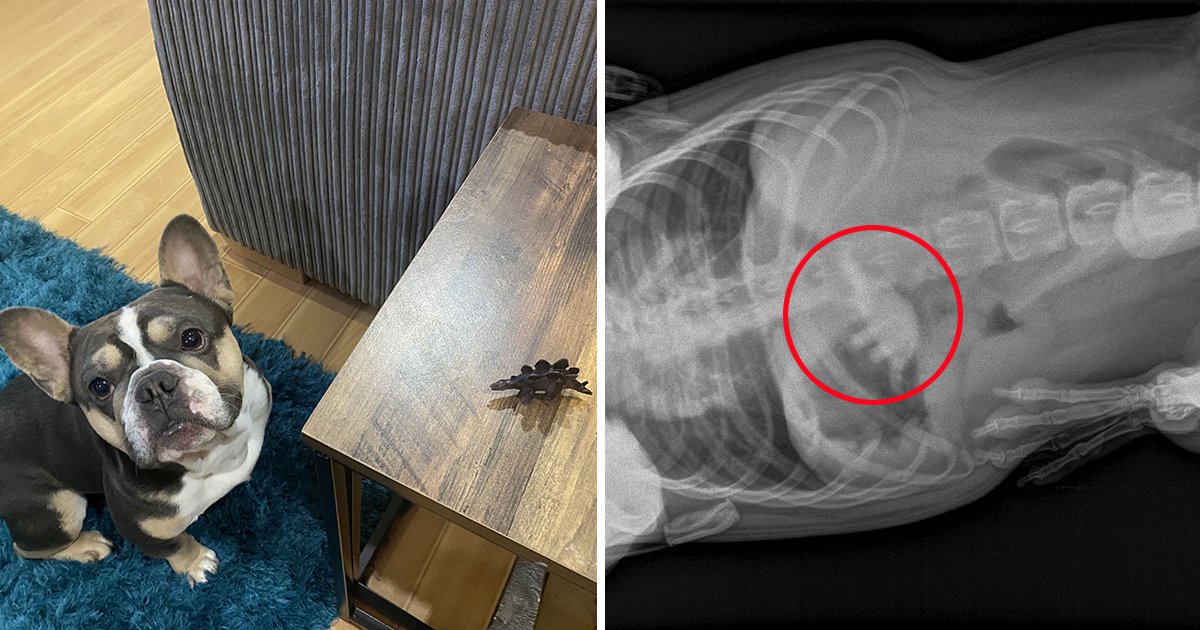 The night before Bruno the dog’s third birthday, he got himself into big trouble.

His brother Thor had found a toy dinosaur under the sofa, and Bruno managed to not just take it from him, but swallow it whole which meant he needed an emergency trip to the vet’s and lifesaving surgery to remove it.

Talking about the pup’s ordeal, his owner Dani, 27, explained: ‘We have two French Bulldogs and our other dog had picked up the dinosaur, but Bruno doesn’t like him to have anything that he’s not got, so he snatched it off him.’

Dani and her husband Chad Danks, 30, say they put their dogs in a separate room when their two-year-old daughter Ember is playing and keep the toys out of reach after tidying them away.

But one dinosaur figure had fallen under the sofa and been missed.

‘We tried coaxing it out of his mouth by putting treats in front of him to see if he’d drop it,’ said Dani, ‘but he was having none of it. He wasn’t chewing it, he was just holding it in his mouth.

‘In the sheer panic that he thought we were about to get it, he swallowed it whole.’

At first, it seemed like he might be totally fine, as Dani, from Solihull, Birmingham, wasn’t sure which dino toy he’d got his jaws on, and hoped it might be able to ‘pass’ without incident.

But the following morning, Bruno took a turn for the worse.

‘In the morning he started heaving and throwing up,’ said Dani, ‘and then his whole body went all stiff, and he fell over. I could see blood in his sick, so I was really worried.

‘Luckily the vet is on our road, so I took him straight over.’

Bruno went for an x-ray, and incredibly the perfectly intact toy was clearly visible in the image.

‘I was gobsmacked,’ recalled Dani. ‘I knew a dinosaur was in there, but I didn’t realise you’d be able to see legs and a tail on the x-ray.

‘It was a bit of a funnier moment in a panic because we were so gobsmacked that he managed to swallow it due to the size of it.

‘Everyone was speechless – I don’t think they’d ever seen a whole dinosaur inside a dog before. He’s pretty famous amongst the vets now because of it.’

‘They spent about 40 minutes trying to pull the toy out with a camera down his throat before they decided it was going to do more damage than good and started prepping to operate,’ she added.

‘There’s always the risk with anaesthetic, especially with French Bulldogs as they’re known for breathing difficulties, so they warned me there was a small risk that he wouldn’t make it through.

‘But they did say that although it was bizarre it was a routine operation, so the vet was confident he would be able to go in, get it out and sew him back up, which is exactly how it went.’

All told, it took the vets nearly three hours to take the toy out, along with an overnight stay – costing his owners a total of £2,500 after discovering their pet insurance had lapsed without them realising.

Bruno also suffered from a cough for two weeks due to the damage done trying to pull the dino out of his throat, two weeks later, he was fully recovered and back to his mischievous self.

Dani said: ‘We used the last bit of savings we had that we were putting aside to potentially expand our family, so we’re back to square one with that, but Bruno’s still here.

‘I was so relieved when he was okay. It’s not just a pet it’s a family member.

‘For the sake of Ember having any toys left and not getting another vet bill, we’re constantly double-checking now and making sure we keep them out of his reach.’