In 2021, a groundswell of female anger over the mistreatment of women in politics saw thousands of women converge on Parliament House.

A year and a bit later, Australian women took that same anger and conveyed it in a different way. 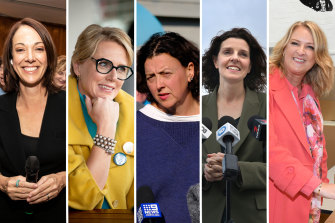 With practical, feminine efficiency, they folded it up and slotted it neatly into the ballot box.

“Women did not see their concerns and interests reflected in a party led by Scott Morrison in coalition with Barnaby Joyce,” former deputy Liberal leader Julie Bishop told Channel Nine on election night.

“Grace Tame and Brittany Higgins, they changed the narrative when they exposed an ugly side to the workplace in Canberra. That resonated with women.”

Says outgoing Home Affairs Minister Karen Andrews: “It was clear coming into the election there were a lot of women disaffected with the Coalition.

“There was a strong perception we were not supportive of women.”

Andrews says that while there were women in the senior ranks of the Morrison government, there were not enough of them.

“I don’t think we were able to demonstrate there was a strong pathway for women within the Coalition, and a good strong understanding of issues relevant to women.”

This election result was driven by women, particularly professional women, who firmly rejected politics as usual, as soon as they had the opportunity to.

Of the seats called on Sunday as having changed hands, the overwhelming majority – a whopping 14 – went to women. But Liberal female representation in the House of Representatives was set to drop from 13 MPs to seven.

For many, that opportunity was the strong field of female “teal independents”, including Allegra Spender, Kylea Tink, Zoe Daniel, Monique Ryan and Sophie Scamps, who were the resounding victors on Saturday night.

Although we don’t yet have a gender breakdown of Saturday’s vote, we do know that women voters have been moving away from the Coalition for decades, and at the 2019 election, the Coalition attracted the lowest proportion of the female vote since the Australian Election Study began tracking it in 1987.

A Newspoll published about a fortnight ago showed that just 22 per cent of women intended to vote for the Coalition, compared to 31 per cent who said they would vote Labor.

‘There was a strong perception we were not supportive of women.’

The result was a wipe-out of Liberal seats (and at least one Labor seat) to an all-female band of teal-wearing independents who now preside over large tracts of the nation’s two biggest cities.

These independents look and sound very much like the women who delivered them to power – urban professionals who juggle careers and kids, women who are affluent but anxious about the future, and ready to take their seat at the top table.

By electoral force if necessary.

“To recover those lost seats, we must face up to the reasons why voters left us, and understand who it is that left us,” moderate Liberal senator Simon Birmingham wrote in a Facebook post following the result. 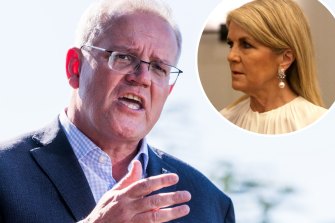 “Women did not see their concerns and interests reflected in a party led by Scott Morrison in coalition with Barnaby Joyce,” former deputy Liberal leader Julie Bishop told Channel Nine on election night.

“It is already clear that we disproportionately lost the votes of many women and professionals.

“Issues of equality, inclusion and respect played a role, along with policy on climate change.”

But he did not go so far as to support quotas, which are anathema to many Liberals, despite proving highly effective in lifting female representation in the Labor party.

One senior female Liberal, who asked not to be named, said the result was “sad but predictable”.

She said the party had a “deep cultural problem” around women and said prominent Liberal men had not openly rejected the poor standards of their male colleagues.

“Liberal men need to tackle other men about their behaviour, it can’t always be left to women,” she says.

“It’s very clear there has been a massive disconnect with the way the Liberal party speaks to women and represents their issues.” 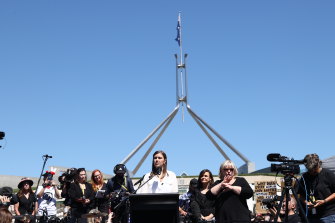 Brittany Higgins speaks at the March 4 Justice protest outside Parliament House in Canberra in 2021.Credit:Dominic Lorrimer

As an example, she singles out the disproportionate domestic load placed on women during the coronavirus pandemic.

“There was no recognition that women bore a huge burden in this, not only trying to keep their jobs but a lot of the time homeschooling their children and taking care of the household.

“There was never any empathy for that. It creates a gap, and frankly a bit of rage: ‘You just don’t get it!’”

Prime minister-elect Anthony Albanese made a virtue of Labor’s female focus during his campaign.

He announced a generous childcare policy and declared his intention to move towards universal free childcare and gender pay equity.

In his victory speech, Albanese said his government would make “equal opportunity for women a national economic and social priority”.

But Labor adviser and Nine newspapers columnist Sean Kelly made the important point on Sunday that while female voters drove the electoral rejection of the Coalition, they did not deliver a strong endorsement for Labor either.

“You look at the teal seats in particular, I think voters made a choice for strong women, not just against the major parties,” he said on Nine’s Today show. 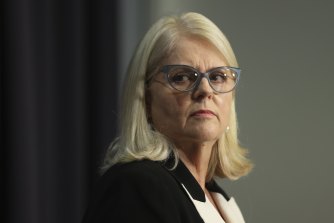 Outgoing Home Affairs Minister Karen Andrews, who retained her seat of McPherson on the Gold Coast, urges her colleagues to spend the next few months talking to people in their electorates, “and women in particular”.Credit:Alex Ellinghausen

“Secondly, we have reached the point where the leaders of the major parties know that they can’t afford to ignore women, and not just not ignore women, they need to be very proactive.”

The teal independents ran gender equity and respect as a key part of their agenda that was well-tailored to an under-served electoral market.

Ryan, the paediatric neurologist and independent who looks set to steal Kooyong from Frydenberg, said on Sunday that, “I wouldn’t let my 21-year-old daughter work in Parliament House because I wouldn’t be able to feel secure that she was safe there”.

“I think that having more women there, and more women who are not career politicians who have life experience in other important sectors like health, will improve the tenor of political discussion, hopefully, in this country,” she said.

Outgoing Prime Minister Scott Morrison was widely perceived as lacking the skills to speak to women or address their concerns, but the senior Liberal says that is “too kind”.

“I think he’s hostile to it, actually. He has a particular view of the world and does not understand the world has changed.”

Then there were the issues Morrison chose to focus on, at the expense of retail concerns preoccupying female voters, like returning to work after children, or the cost of living.

Speaking on Sunday, the newly elected member for Wentworth Allegra Spender said her voters were “socially progressive, we are environmentally focused”.

She singled out the targeting of transgender children as something her community in Sydney’s eastern suburbs “hates”.

Andrews, who retained her seat of McPherson on the Gold Coast, urges her colleagues to spend the next few months talking to people in their electorates, “and women in particular”.

She singles out women who have had kids and want to re-enter the workforce, as well as young women, who might be passionate about climate issues.

“And older women, particularly those who have gone through a marriage breakup and have low superannuation and are having to re-enter the workforce.”

Andrews says it is crucial now for the Liberals to elevate more women to senior positions within the party.

“We needed to be able to prove to people we were a party for all Australians,” she says.

05/22/2022 Lifestyle Comments Off on Hear me roar: how the female vote swung the election
Recent Posts