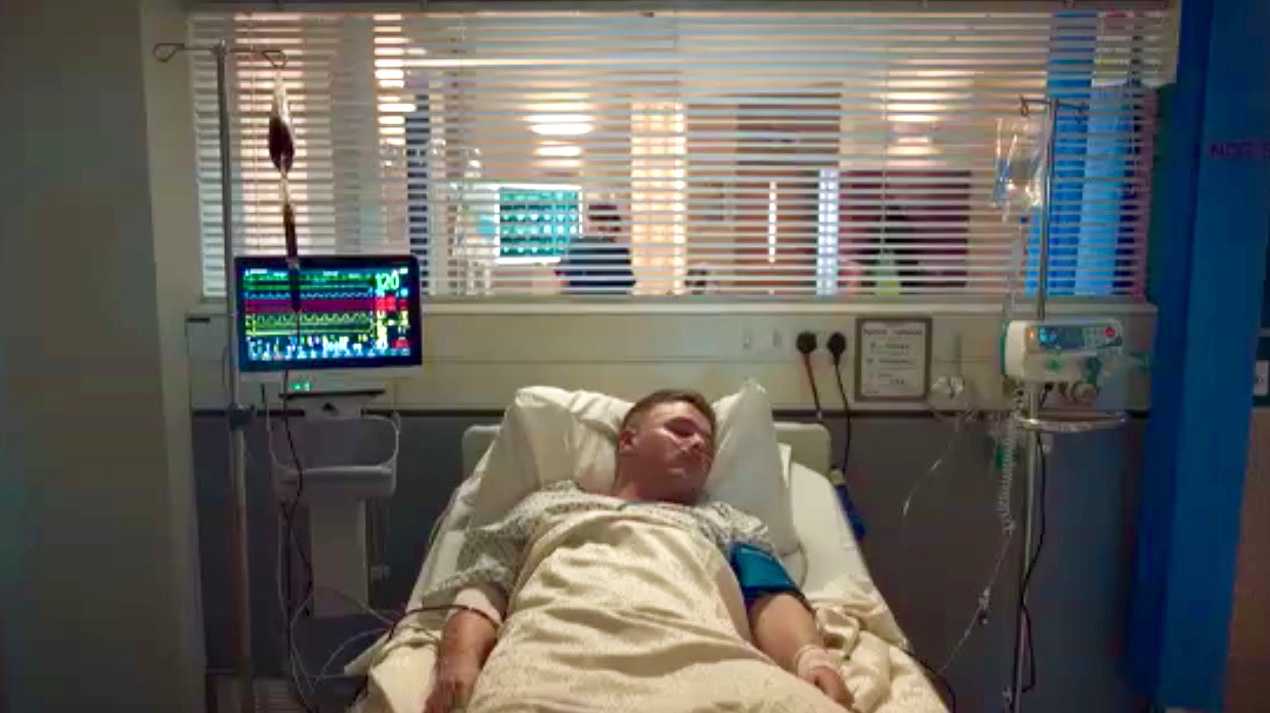 A distressing episode of Holby City tonight dealt with the repercussions of the car crash we saw at the end of the last episode. As Dominic (David Ames) searched for Jodie (Sian Reese-Williams) in the hospital car park, she walked out in front of him. He hit her and the car swerved and crashed into a loaded skip, a metal pole puncturing the windscreen.

The episode started with a frantic Sacha (Bob Barrett) and Hanssen (Guy Henry) realising that Dominic would bleed to death if they didn’t get him out of the car straight away. In theatre, Hanssen battled to save his colleague’s life, as Sacha operated on Jodie, trying to keep both her and her baby alive.

Ange (Dawn Steele) and Chloe (Amy Lennox), Dominic’s biological mother and half sister, were told what had happened. Ange rushed to the operating theatre and insisted on being involved.

She shouldn’t have been there in the first place and was so distressed that she really couldn’t cope, and Hanssen calmly took over. Ange spent the rest of the time waiting anxiously outside with Fletch (Alex Walkinshaw) and Chloe.

Ange tried to contact Carole – the woman Dominic grew up thinking of as his mum. ‘It was Carole who patched him up when he fell over, not me,’ Ange said, sadly. ‘I’m no comfort to him.’

Dominic badly needed comfort when he woke up. Hanssen had saved his life, but his spleen had to be removed and also a large part of his bowel, meaning he’ll need a stoma bag for the rest of his life. Not surprisingly, Dominic didn’t take this news well, but as he recovers he’s going to have the support of Ange, who spent the night next to him as he slept.

In the other operating theatre, Sacha was unable to save the life of Jodie’s baby, and for a while it was touch and go whether Jodie would survive. Jodie’s mum Linda (Lara Chase) had turned up at the hospital, but was reluctant to accept responsibility for looking after her daughter.

Because of Jodie’s mental health, Lucky (Vineeta Rishi) said she would have to be sectioned. Jodie overheard this, and the news that her baby had died, and tried to leave the hospital. Lucky found her in the basement in a pool of blood, and very distressed. Sian Reese-Williams conveyed Jodie’s pain with a raw and heartbreaking performance.

And Donna (Jaye Jacobs) and Alex (Miles Mitchell) kissed! He was blaming himself for the entire car crash, because he was supposed to have been keeping an eye on Jodie when she went walkabout earlier. Donna did her best to reassure him that it wasn’t his fault and he’s an excellent nurse. In the process, she finally convinced herself of her own feelings about him. ‘I quite like having you around, I can’t just let you walk away,’ she told him.

But what was going on with patient Bobby Edwards (Callum Callaghan)? He has photos of Donna on his phone, and he keeps a press clipping about Xavier’s accident. Could Bobby Edwards be the cyclist who collided with Xavier and caused his accidental death? And will he realise that Cameron (Nic Jackman) is the other person who was on the scene when Xavier was killed?

He’ll have fewer chances to spot Cameron now, as Holby’s most dangerous doctor has relocated himself to Darwin. All he had to do was pop up there and tell Sahira Shah (Laila Rouass) that CT was his passion, and he was in.

To be fair they were short-handed, what with Kian (Ramin Karimloo) still on desk duties and Chloe away worrying about Dominic, but still. Nicky (Belinda Owusu) is not best pleased at the thought of Cameron muscling in on her territory. If only she knew what we know about Cameron. Expect the body count to start going up on Darwin.

Sue Haasler is the author of five novels and the official BBC Holby City book, which you can read about here.