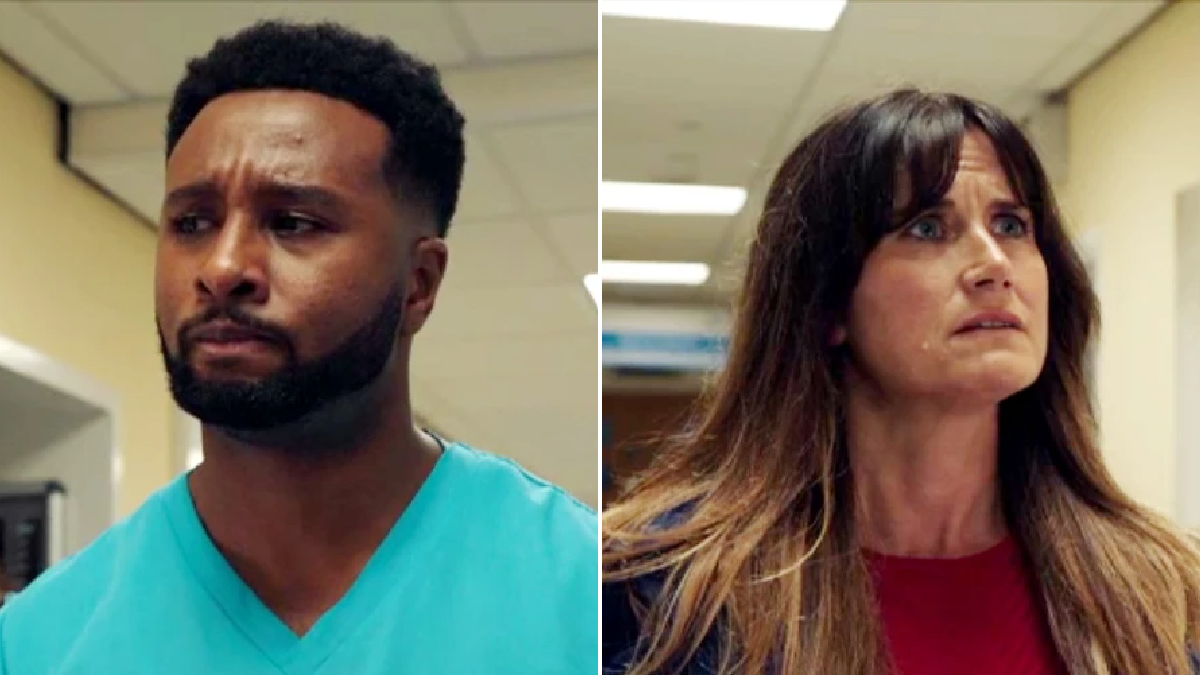 There was a happy ending of sorts for Lucky Simpson (Vineeta Rishi) in tonight’s Holby City as she left the hospital in a much more positive frame of mind. ‘I am still me. Today, right now, I can see a future,’ she said.

This was in complete contrast to the bitter, despairing Lucky who was brought in earlier with an infection, in part caused by her not having the will or desire to look after herself and still wanting to die rather than face a future in a wheelchair.

So what happened to bring about this change of heart? Well, two things really. The first was Lucky helping to reconcile Fletch (Alex Walkinshaw) and his daughter Evie (Phoebe French). She’d turned up with a nasty bruise on her face after being picked on at college, because of what Jeni Sinclaire put her through.

Lucky saw that Fletch was still too angry and hurt to be able to support Evie properly, and got them both to open up about how they were feeling. In doing so, she began to realise that her famous people-helping skills were all still intact.

The other thing that happened to her was Louis McGerry (Tyler Luke Cunningham), a diamond of an individual who knew that all Lucky really needed herself was to be listened to, and to be reminded how much she’d helped him. ‘You’re still the same soul,’ he reminded her. ‘Give this new life a chance.’

Meanwhile, Jac Naylor (Rosie Marcel) also had a chance at a new life as she had the proton beam therapy treatment that just might save her life. But, like Lucky, she needed some friendly help to overcome her fears and this came from Eli (Davood Ghadami). We now have to wait and see whether this will be the cure that Jac is hoping for, and whether the same treatment can also help Eli’s wife Amelia (Lucy Briggs-Owen).

Eli’s worries about Amelia meant he didn’t have as much time for Josh (Trieve Blackwood-Cambridge) as Josh ideally wanted. His runs with Eli have become part of his coping mechanism for his bulimia, as has avoiding Ange (Dawn Steele). Eli made him realise he had to talk to Ange and he managed to get up the courage to do that. Her reaction was to give him a supportive hug, but possibly manly in relief because she thought he was going to dump her and the twins.

Oliver Valentine (James Anderson) did some good work on AAU, where he discovered that some patients from a care home fire were exhibiting odd symptoms because the manager was dosing them with something to keep them quiet. This discovery had a transformative effect on one patient, Susannah (Eileen Nicholas), and earned Ollie the approval of Russ Faber (Simon Slater) – who is now co-clinical lead of AAU along with Ange – and Henrik Hanssen (Guy Henry).

In fact Hanssen said that Ollie was ready to step up his surgical retraining. This thought clearly terrified him, particularly when he saw locum and former girlfriend Maisie Scarborough (Katherine Jack) – the woman who alleges he hit her, though he doesn’t remember a thing about it.

Can Ollie hold himself together?

Sue Haasler is the author of five novels and the official BBC Holby City book, which you can read about here.

Find out more about eating disorders by clicking on this link to the BEAT Eating Disorder website.

You can seek help for an eating disorder by calling the BEAT helpline on 0808 801 0677. Find more support and further contact numbers here.