This pandemic is an event of a scale, duration and consequence that makes it a unique challenge for media organisations such as The Age to cover. Along with the public's intense interest in all things COVID-19 has come an equal degree of scrutiny of how this story is being covered. In a liberal democratic society that values a free press, that is as it should be.

Since COVID-19 took hold, Age reporters have given a voice to thousands of people from Premier Daniel Andrews, whose daily briefings are attracting a wide audience, to health workers, scientists, business leaders, students, shop owners and everyday people facing extraordinary circumstances, in an effort to provide information and reflect the enormous impact on our lives. 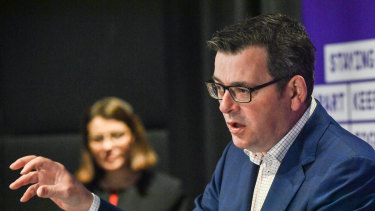 Daniel Andrews responds to questions from the media.Credit:Joe Armao

With so much disruption, such voices are also highlighting much greater levels of anxiety, criticism and even anger. And with governments playing such a comprehensive role in directing and managing the disruption, many people's frustration is being directed at perceived mistakes and shortcomings of the COVID-19 response – the hotel quarantine debacle being the most obvious.

But is this time for such criticism? There is a sincere belief from some that, to use Daniel Andrews' bushfire analogy, when the fire is burning, the focus should be on extinguishing the blaze, and not attacking those fighting the fire. Is the scrutiny of the government too harsh?

The Age does not underestimate the Herculean task before Mr Andrews and his team. We support the Premier when he thanks the many thousands of people working round the clock and, at times, putting their lives at risk, to combat the latest surge in cases and care for those afflicted by the virus.

And previous Age editorials have strongly supported many of the tough decisions he has had to make, such as mandatory masks, closing Melbourne's outer borders and bringing in stage four restrictions.

But The Age also takes very seriously its role in ensuring transparency and accountability, no matter what the circumstance. By declaring a state of disaster, the state government has sought far stronger and broader powers to enforce its authority. And by limiting the time Parliament sits, it has also severely curtailed the ability of the opposition to hold the government to account.

That leaves most public accountability for when Mr Andrews, and often Chief Health Officer Brett Sutton and various ministers, front up each day to face the media. To his credit, Mr Andrews makes a point of responding to every question put to him. But there are some significant shortcomings.

Get our Coronavirus Update newsletter for the day’s crucial developments at a glance, the numbers you need to know and what our readers are saying. Sign up to The Sydney Morning Herald’s newsletter here and The Age’s here.

The amount of information released is often far from comprehensive. And Mr Andrews is deft at batting away credible criticism highlighting inadequacies in the COVID-19 response. He often responds by assuring the gathered reporters that "everyone is doing their very best". That may be true, but decisions are being made with minimal public scrutiny. With the exception of the delayed hotel quarantine inquiry, an inquiry which The Age welcomes, there is little mention of further public transparency.

The Age has been a witness to many periods of enormous upheaval during its 165 years of publishing. During such difficult times, it has always supported the Victorian community by ensuring that it holds the government to account, no matter its political persuasion or the predicament it may face. The Age wishes Mr Andrews and his team well as they do their job, but that will not stop us from doing ours.

The Age’s acting editor, Michelle Griffin, writes a weekly newsletter exclusively for subscribers. To have it delivered to your inbox, please sign up here.

08/10/2020 Lifestyle Comments Off on Holding the government to account is as important as ever
Recent Posts
We and our partners use cookies on this site to improve our service, perform analytics, personalize advertising, measure advertising performance, and remember website preferences.Ok