THE average person watches more than five hours of TV a day, but have you ever thought about how much it costs to have the telly running?

Research by Ofcom found that UK adults spent a whopping five hours and 40 minutes every day in front of the TV in 2020. 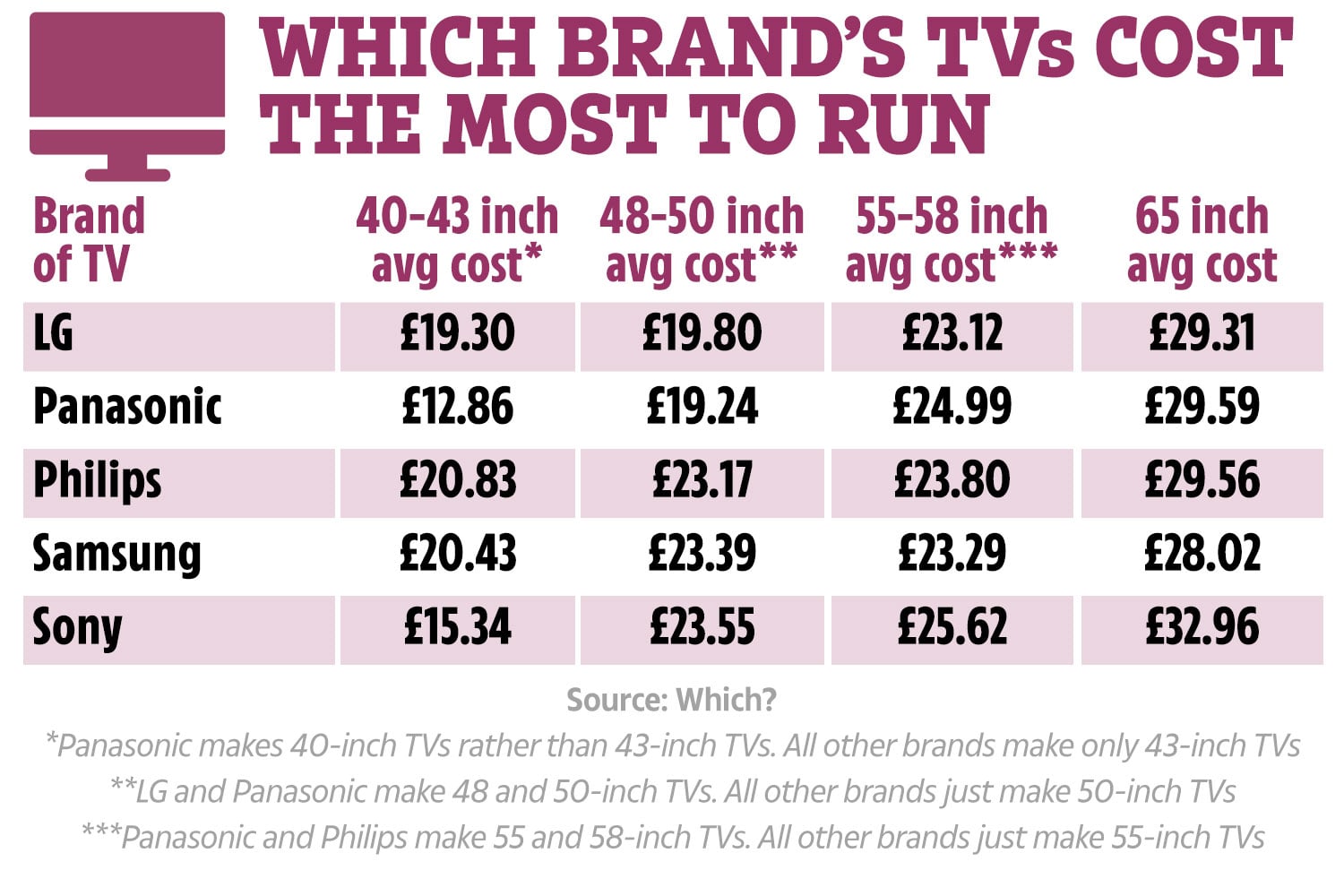 It’s an increase of 47 minutes a day from 2019, and largely spurred by lockdown, when there was little else to do of an evening.

While the myth that too much screen time turns your eyes square might not be true, too much telly time could definitely be adding to your bills.

And having a less energy efficient television could be ramping up your costs even further.

Exclusive figures for The Sun by Which? show that everything from the size, make and energy rating of your TV will have an impact on your energy bills.

That’s particularly important for households at the moment, as a cost of living squeeze continues to force prices up.

Energy bills have soared in recent months as wholesale gas prices have surged and a string of providers have collapsed.

Latest figures have shown households may suffer a bill hike to the tune of £2,000 by the end of the year.

We’ve looked at how you can save energy in every room of the home, and the worst appliances to leave on standby that could be adding hundreds to your bills.

Energy ratings on TVs were tightened up this year, and stricter rules meant many sets that were previously rated A or B were suddenly downgraded to an E of F for energy efficiency.

Which? has looked at how much energy TVs use when they’re being used as well as when they’re on standby, looking at different screen types and manufacturers too.

It has crunched the numbers to work out which are the cheapest and most expensive TVs to run.

All figures are based on the TV being used for four hours a day and being left on standby for the other 20 hours.

How much does a TV cost to run?

But there’s a big difference depending on which model you have.

Unsurprisingly, the bigger the telly, the more expensive it is to run.

The highest running cost was a Samsung at £31.90 a year, but the cheapest was almost half that, a Panasonic model cost just £16.71 a year.

If you’re in the market for a bigger screen, the running costs go up again.

The type of screen on your set will have an impact on the running costs but not a major one.

A 55-inch OLED screen came in as the most expensive at £26.25, but was marginally cheaper than an LCD screen on other sizes.

Which? said: “You’d expect LCD and QLEDs to cost the most to run since they have backlights.

“The extra layer of bulbs that shine on a colour-producing layer should mean they use more power than an OLED, which was no backlight.”

Before you pick out a telly made by your favourite brand, it’s worth checking out the energy efficiency credentials.

The research by Which? Found significant differences in the running costs across various brands.

For a 40- to 43-inc model, choosing a Philips TV would cost almost £8 a year more than owning a Panasonic version.

Which? Said: “43-inch TVs aside, it's Sony TVs that cost the most run, but the prices are broadly similar regardless of the brand you choose.

“The biggest difference is in the 40 to 43-inch bracket.

“Panasonic, which exclusively makes 40-inch models is cheapest, but of the brands making 43-inch sets there's a £5 difference between the cheapest and most expensive to run.”

If you are interested in keeping costs down, we've also looked at how much it costs to run other appliances such as a hairdryer and a microwave.

If you're trying to keep the energy bills down, we've looked at how much it costs to run a log burner and also an electric blanket.

11/18/2021 Lifestyle Comments Off on How much does your TV cost to run?
Recent Posts