‘I had my breasts removed to avoid cancer, and I won’t have them rebuilt’: Woman, 29, with alopecia, reveals why she refused a reconstruction

A woman who lost her hair to alopecia and then had a double mastectomy says she tattooed her flat chest to take control and create a body that felt ‘most like her’.

Marisa Kimmel, of Bay City, Michigan, was diagnosed with alopecia – a disease that causes hair loss – at the age of nine and spent years trying to hide her bald patches.

She finally shaved off all her hair aged 19 but then, several years later, decided to undergo genetic testing due to a history of breast cancer in her family.

After realising she was ‘high risk’ she had a double mastectomy but refused reconstructive surgery – instead tattooing her flat chest. 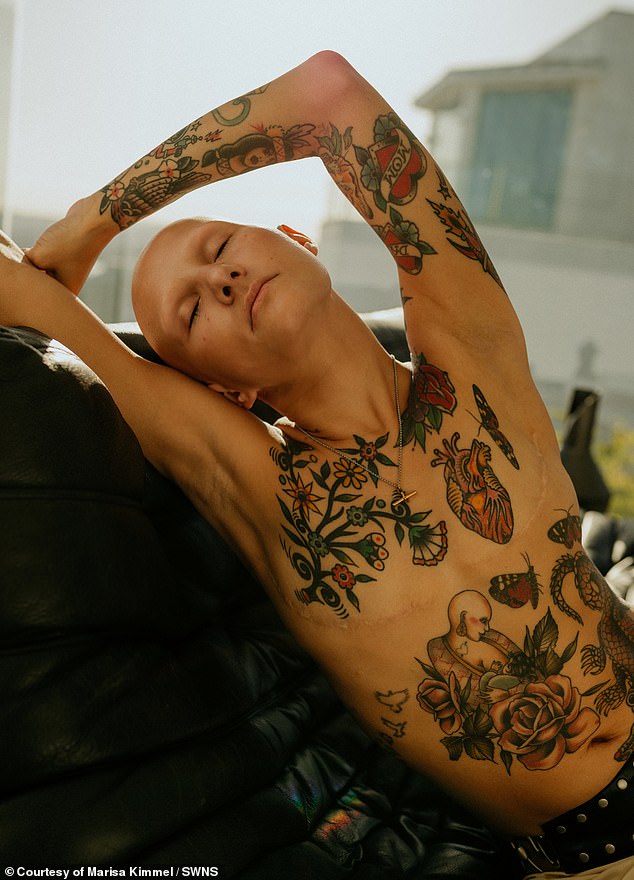 The mother of one showing off her striking body. She refused reconstructive surgery following her double mastectomy, saying she wanted to take control of how she looked 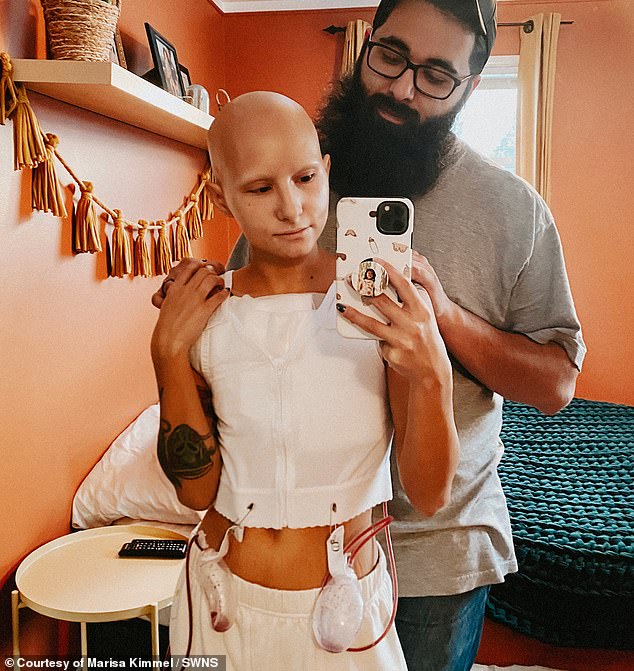 The couple have been through a lot together, including starting a family and dealing with Marisa’s health problems 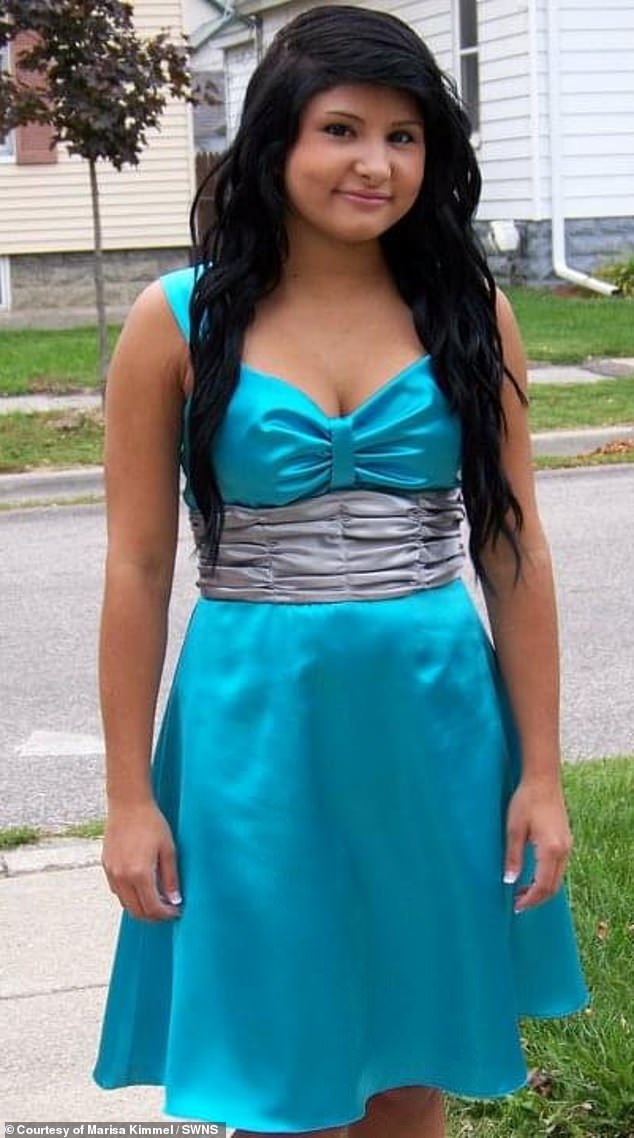 Marisa of Bay City, Michigan, used to spend hours a day trying to hide her bald spots from her peers at school

Marisa, who is a photographer, now bares her body on TikTok in a bid to inspire others to be strong.

She said: ‘I want people to realise that they’re never alone in the hard stuff.

‘You have to find a community that is ready to hold you when you can’t be there for yourself.

‘Social media can be hard, you compare and see everyone’s highlights.

‘And so for me I really try and share all the sides of myself.

‘I know how worth it is to keep choosing myself and find peace with the cards I was given.’

Marisa spent her younger years trying to come to terms with her alopecia, but felt it was controlling her life.

But as she got older, she learnt to accept herself and stopped looking to others for validation.

She said: ‘When I was diagnosed with alopecia, I was never given that much information.

‘I was a nine-year-old and just followed the shampoos and steroids.

‘But the dermatologist at that time made me feel like it was my fault. I didn’t realise how much I internalised that for 20 years.’ 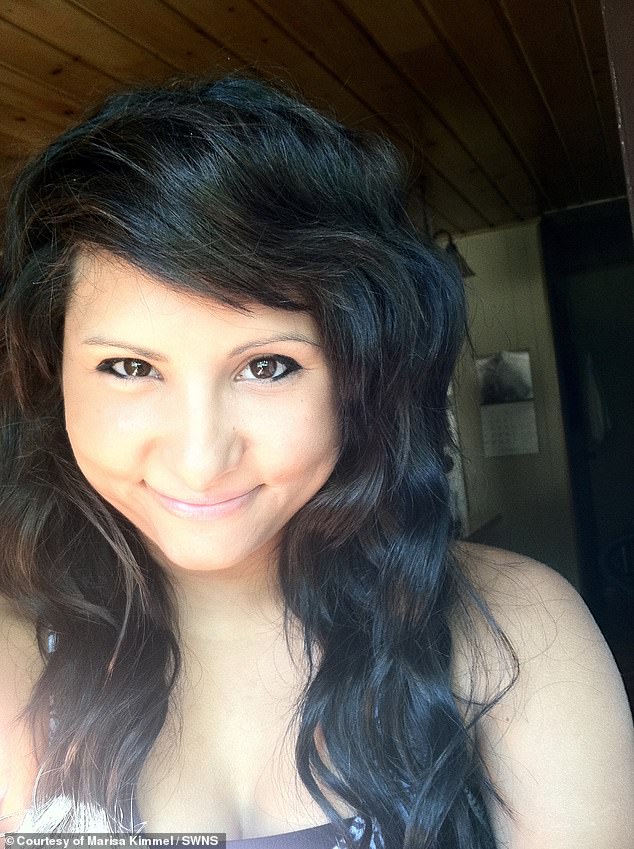 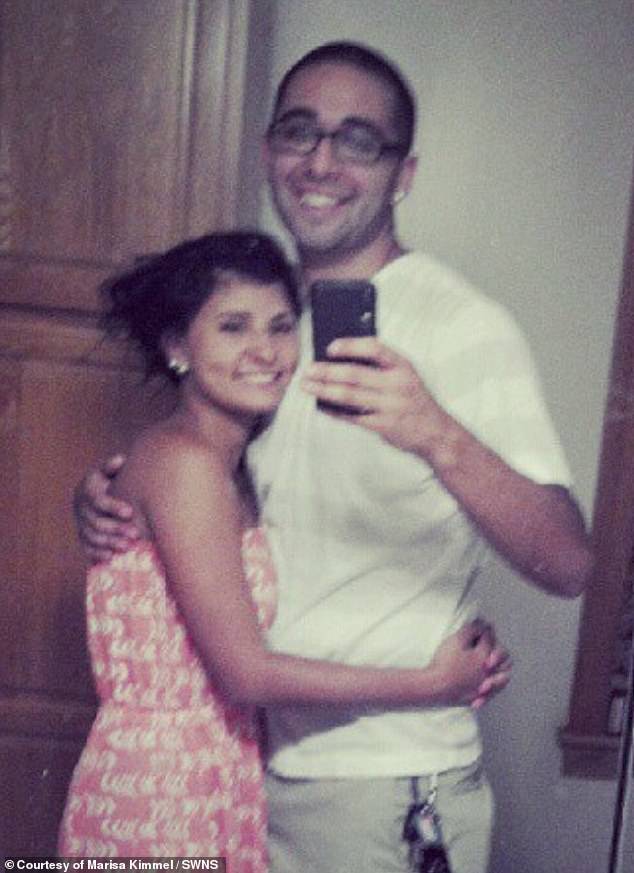 Marisa and Drew (pictured) met when they were young and are still together, having been through a lot together 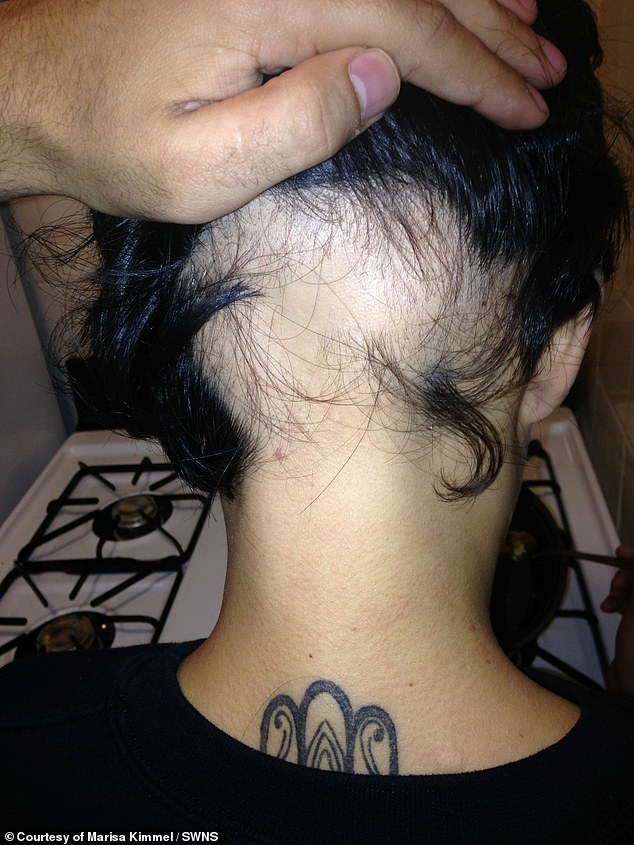 Marisa has suffered from alopecia since she was nice. She says doctors initially made her feel like it was her fault 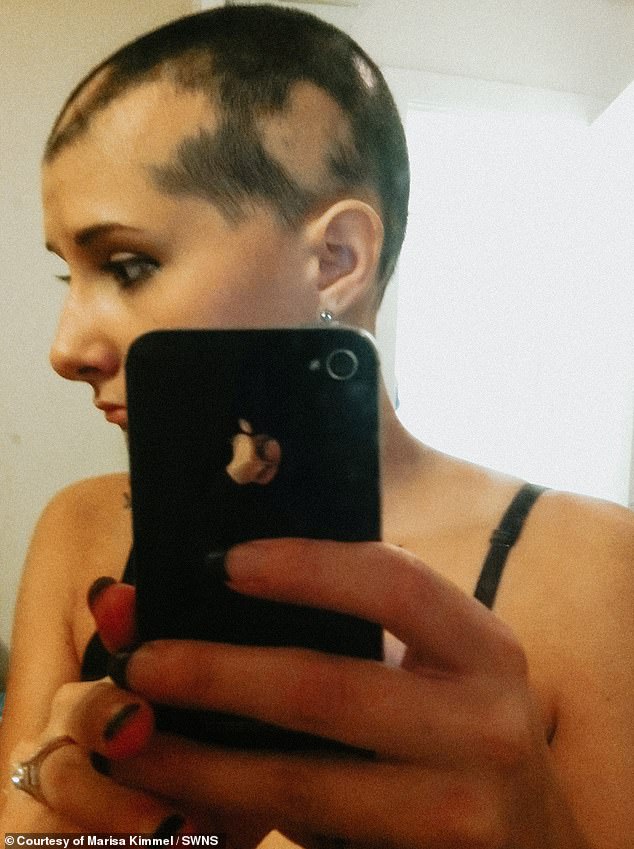 By the age of 14, Marisa was getting hundreds of steroid shots in her head to try in order to prevent her hair loss and look like others around her.

During high school, she would also wake up early to spend time covering her bald spots so she would feel as comfortable as possible in front of her peers.

But she then gradually started googling alopecia and began seeing images of other people with it.

‘The photos that I saw were the most heartbreaking photos. Some were bald, some had bald spots, but everyone looked miserable,’ she said.

‘So, I thought that was my future, that’s what I would be – not having a good life.

Alopecia, which causes baldness, is thought to be an autoimmune disorder. The immune system – the body’s defense system – turns on itself.

What are the symptoms?

‘Typically, one or more small bald patches, about the size of a 50p piece, appear on the scalp. The hair can start to regrow at one site, while another bald patch develops. Hair may also begin to thin all over the head,’ says Marilyn Sherlock, chairman of the Institute of Trichologists.

‘For some reason, the body’s immune system begins to attack its own hair follicles. Special white blood cells in the body, known as T-lymphocytes, cause the hair to stop growing,’ she adds.

Can worry make it worse?

Stress has been shown to prolong the problem.

Is it an inherited condition?

There is strong evidence to suggest that alopecia, like other auto-immune diseases, runs in families. About 25 per cent of patients have a family history of the disorder.

Alopecia areata usually affects teenagers and young adults, but it can affect people of any age. It is just as common among men as women.

Is there a cure?

There is no known cure, although there are various treatments which may be effective for some people.

‘I decided to stop all treatment that was giving me false hope.’

At 19, Marisa finally decided to take matters into her own hand and shaved off all her hair.

She explained: ‘I had about 50 percent of my hair left and my boyfriend at the time, Drew, now my husband, shaved my hair for me.

‘That was the first time I trusted myself. I felt free.’

Marisa and Drew – aged 20 – then moved to Chicago together, something that helped Marisa ‘breathe’ and choose what was right for her.

Marisa said: ‘It was a snowball of choosing me and what felt right for me and my life.

‘I finally just felt that I could be myself.

‘I could just breathe, and my alopecia felt less important and a smaller worry.

‘I gained a perspective of what actually mattered in life.

‘I wanted to feel and be beautiful, so I started surrounding myself with people that accepted for me who I was.’

Marisa and Drew then got married, and Marisa gave birth to her son, Abraham, a few years later, with the family the moving back to Michigan, US. 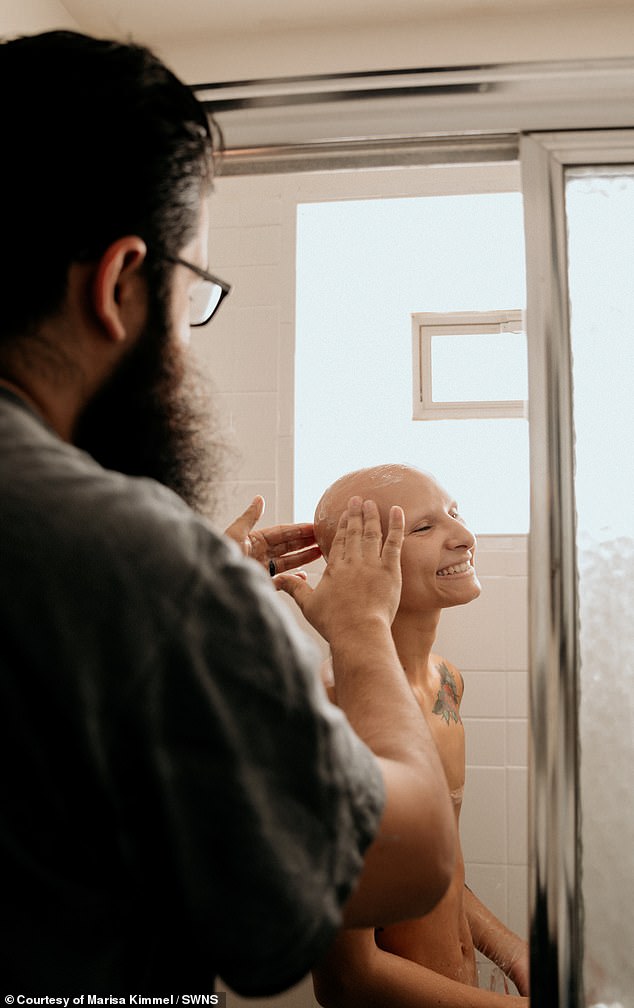 Drew shaving Marisa’s head. He was the first person to help her do it when she was 19 and wanted to have some control of her looks 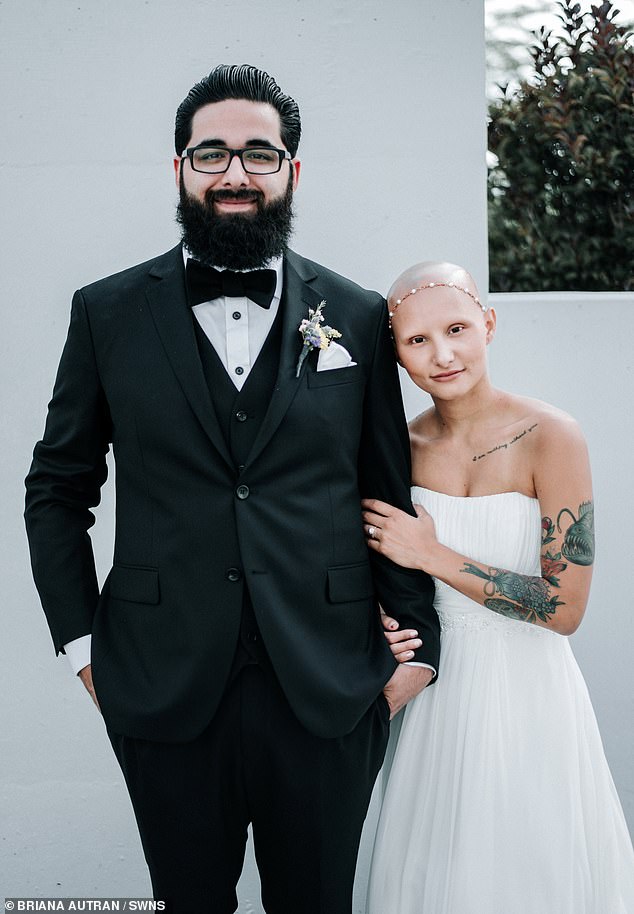 Marisa and Drew pictured on their wedding day. Drew has always been there for Marisa, being the first person to help her shave her hair off 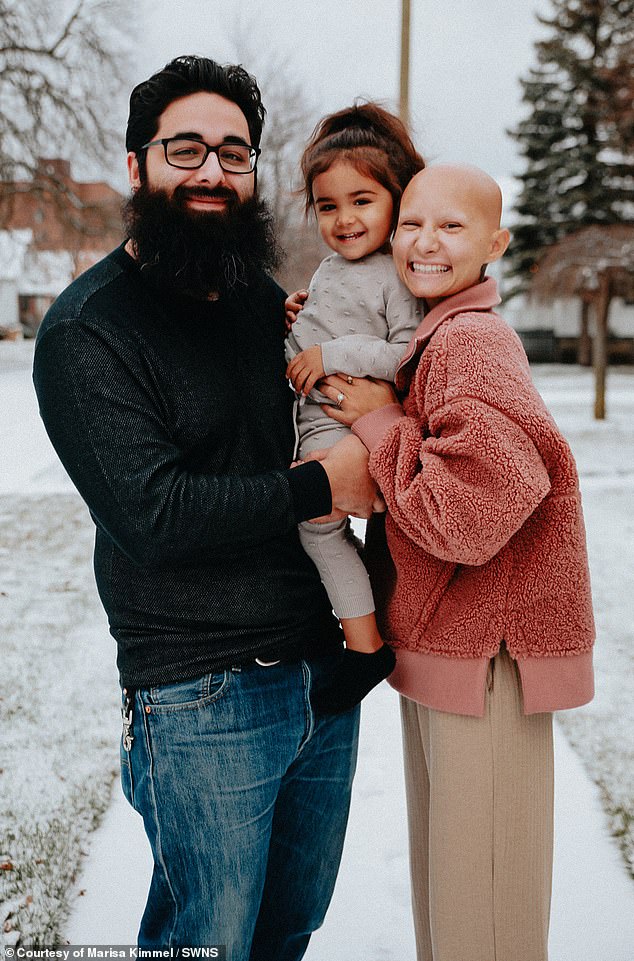 Marisa and Drew had a son, Abraham, now four, who Marisa breastfeed for two years before committing to have a double mastectomy

After discovering breast cancer ran in her family, Marisa decided to get genetic testing done to determine her chances of developing the disease.

She was told she had an 80 percent chance of contracting breast cancer and a 40 to 60 per cent of getting ovarian cancer.

Marisa said: ‘The options were do nothing for six months then have breast and pelvis exams, or I could do preventative surgery.

‘It took me back to my alopecia – I wanted to take control.

‘So, I decided to have the surgery and take those percentages and have a chance to influence them.

‘They were genetics that I couldn’t control but I had an option to face them.’

Marisa finished breastfeeding Abraham, while grieving the fact the she wouldn’t ever get pregnant or breastfeed again.

Then she tried to prepare myself for a new body deciding to take control of how she looked post-surgery and ‘create’ a body that felt ‘most like ‘her’.

‘In January 2021 I decided I was done breastfeeding and ready for surgery,’ she said.

‘I decided to go completely flat and not have breast reconstruction.

‘In those two years leading up to my surgery, I planned out my tattoos across my chest.’ 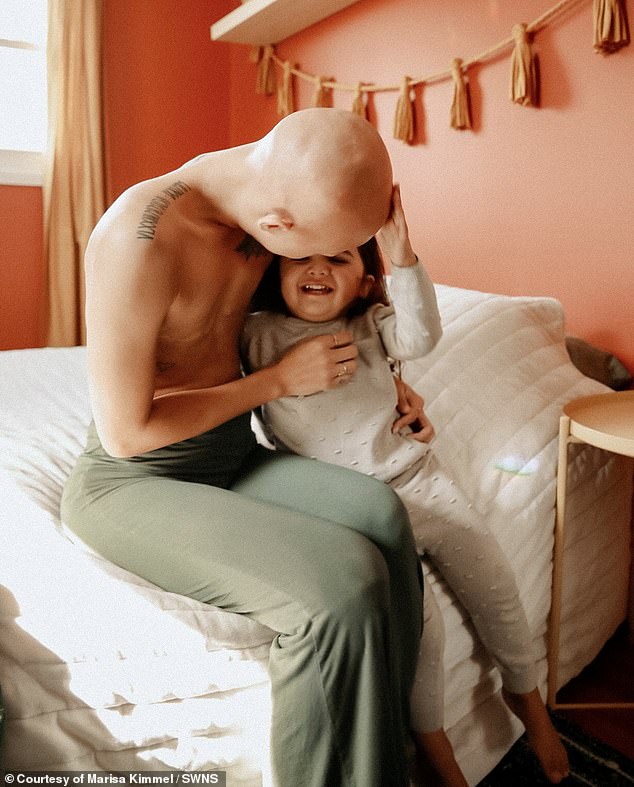 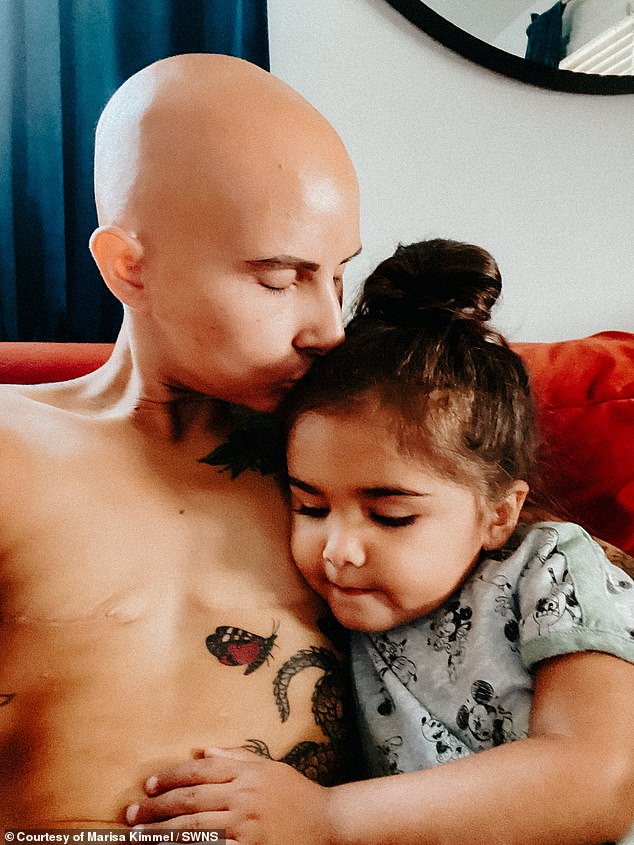 Marisa (pictured) cuddling her son following her breast surgery. She tattooed her chest to take back control of who she looked and felt about her body

Marisa is now looking ahead to her ovarian surgery on November 21  – which involves removing both of her fallopian tubes.

The procedure will leave her unable to pass on her genetics and get pregnant.

She said: ‘I’m having my tubes removed and with that you are no longer able to get pregnant.

‘It’s a decision that I can’t undo once I have that surgery.

‘So, it feels heavy and full of all the emotions possible.

‘But it also feels right, and I’ve learned from my past that those hard decisions you sometimes have to make.

‘The other side of that is more freedom.

‘I have alopecia and had a double mastectomy. I’m so proud of my body and all it has been through.’

11/18/2022 Lifestyle Comments Off on I had my breasts removed to avoid cancer, I won't have them rebuilt
Recent Posts