Casey Donovan is tired of talking about her size. From the night she became the 2004 Australian Idol, astounding viewers with an extraordinarily powerful voice for a 16-year-old girl, her waistline has attracted as much attention as her talent. Now 33, an accomplished singer and actor, having recently flexed her comic muscle in Peter Helliar’s How to Stay Married, Donovan finds herself again addressing the issue of obesity. Only this time, it is on her terms, as presenter of the third episode of the SBS documentary miniseries What Does Australia Really Think About …?, airing on Wednesday, September 1, following episodes on disability (presented by Kurt Fearnley) and old people (Noni Hazlehurst). 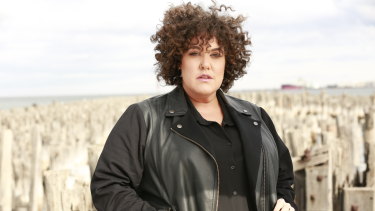 Casey Donovan examines our attitudes towards body shapes in What Does Australia Really Think About…?Credit:

“Talking so openly about obesity, and what Australia really does think about it, was really interesting,” Donovan says. “I want to bring more light to [the issue] and find out some answers about why some people are the way they are.”

University survey results gauge the extent of “unconscious bias” towards people who fall into the three categories. Experiments tease out the underlying attitudes of people who would normally identify as open-minded and non-judgmental. The most difficult segments to watch are hidden-camera stunts, in which unsuspecting members of the public are observed as either perpetrators or passive bystanders of verbal abuse. In the obesity episode, actors taunt an overweight man named Michael to see how others respond.

“I take my hat off to Michael to be so strong and confident,” Donovan says. “Watching that footage was very confronting for me. I lost a little bit of hope in humanity. It was really sad. But that’s life … Always being a bigger girl, I’ve had that shield to prepare myself. You’re always walking around thinking, ‘Oh my god, is someone going to say something? Is today the day that someone’s going to scream in my face?’ It takes years to be able to overcome that. You get glares and stares, but you learn to shake it off.”

The psychological distress of such constant hypervigilance is explored, as well as the factor that genetics play in predetermining a person’s shape.

“For me, it was really helpful talking to the doctors about the way my body is, and for someone to say, ‘It’s not your fault’,” Donovan says. “I’ve got the hunger gene. I’ve been lots of different weights and sizes in my life and I’ve trained really hard and I haven’t trained at all, but my body just takes me back to what it thinks is a safety weight. I feel once you can be confident in your skin, that’s when the real progress can happen.”

At the end of the episode, former Perth radio presenter Heidi Anderson, who had been taunted by listeners for being a dress size slightly above miniscule, leads a group of men and women in a flash mob strip (down to underwear) on a busy beach. While some participants are overweight, and some likely morbidly obese, many are average in size. It’s a reminder that body insecurity affects more than those who present as a target for bullies.

“It’s always shocked me,” Donovan says. “You think someone is completely happy and they’re a little diva and then you find out they’ve got eating disorders. Everyone’s hiding just below the surface, thinking there’s always something that could be better about their bodies. Bigger people would own that physically, but there are people in smaller bodies that carry that same stress and heartache and pressure.”

Although Donovan intended to observe the flash mob, she caved in to pressure to join in.

“I couldn’t stand there and keep everything on,” she says. “I wanted to celebrate with everyone all the stuff that we’ve overcome in our own ways and in our own time. I just thought, ‘Stuff it’. It’s just a body, at the end of the day, and we only get one of these.”

Find out the next TV shows, streaming series and movies to add to your must-sees. Sign up to get it every Thursday.

08/12/2021 Lifestyle Comments Off on ‘I lost a little bit of hope in humanity’: the TV moment that rattled Casey Donovan
Recent Posts