Though there are many versions of the iconic stage musical West Side Story, few are as definitive as the 1961 film adaptation directed by Robert Wise and Jerome Robbins. Inspired by Shakespeare’s play Romeo and Juliet, it captivated audiences as love blossomed between Tony and Maria, even as the rival gangs to which they belonged, the Jets and the Sharks, went to war. As movies go, it set a high bar, winning 10 Oscars from 11 nominations.

Rachel Zegler – described as an actor, singer and YouTuber, a very modern kind of triple threat – was six when she sat down to watch it with her parents. Her Colombian mother had talked to her about the importance of the Puerto Rican-born actor Rita Moreno, who played Anita, the girlfriend of Sharks leader Bernardo. 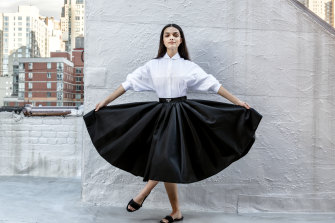 Rachel Zegler: “I try not to lead with fear, otherwise I’ll never do anything, but also to use the fear to my advantage when I can.”Credit:Stefan Ruiz/Headpress

“I just remember staring up at the screen while she was twirling around in that iconic purple dress, being thrilled by her, and it followed me throughout my entire life,” Rachel says. Indeed it has. Now, 14 years later, Rachel has not only become one of the most talked about rising stars in American musical theatre, she is about to step into the celluloid frame in the role that Natalie Wood made famous in that 1961 classic: Maria, Bernardo’s baby sister, who makes the calamitous decision to fall in love with a Jet named Tony. And the new version is directed by no less than Steven Spielberg.

“It’s a huge responsibility,” Rachel says, as the lights on post-pandemic Broadway and the world’s cinemas are flickering back on, and the highly anticipated remake of West Side Story is loaded into the metaphorical projector. “To say you were one of 30,000 seen by Steven Spielberg is an honour. To get the role is an even bigger honour. I can’t take it lightly.”

Rachel was born in Hackensack, New Jersey, and went to the Catholic all-girls school Immaculate Conception. To say it’s a school with a formidable musical theatre program is an understatement. In four years of high school Rachel was the lead in productions of Beauty and the Beast, The Little Mermaid, 42nd Street and Shrek: The Musical.

“It was crazy,” she says, laughing.

“I don’t even know what was going on. We look back and it feels like a fever dream. We sold out shows. Like, it was absolutely wild – we just had so much fun. There were other high schools that took themselves so seriously and it showed in the performances. We were like, let’s be 16 years old on stage and have the time of our lives.”

So serious is the business of high school musical theatre on America’s east coast, they even have their own awards, the Metro Awards, in which 55 schools participate. Rachel, like some sort of pre-Broadway Susan Lucci, was nominated for best actress four years in a row – and lost. “When I lost the award for Shrek, I was like, I’m in a movie, it was just like this hilarious superiority complex that I had,” she says. “We got recognised and that’s really cool, but truly it was just fun, the last couple of years of childhood.”

But even as she was working on Shrek, she was building a profile on the social video platform YouTube. In a relatively short space of time she landed three blue-chip gigs: Maria in West Side Story, the DC Comics film Shazam! Fury of the Gods and Disney’s live-action remake of Snow White and the Seven Dwarfs, in which she will play Snow White.

In January 2018, director Steven Spielberg posted an open casting call for West Side Story on Twitter. There were 30,000 responses, including Rachel’s. The virtual nature of this process speaks more to the generation gap between old Broadway and a new world driven by social engagement.

“I think it’s a way a lot of [younger people] have been conditioned, and the way that I conditioned myself, that before West Side Story, with no representation, I was on my own and I would market myself and try to get myself in the room,” Rachel says.

“West Side Story is dripping with nostalgia for so many people. It has withstood the test of time, with the most iconic melodies and lyrics that I’ve ever heard.”

Needing to be seen, she started her own YouTube channel. Over time, however, her relationship with her social media profile has changed.

“I witnessed the toxicity of para-social relationships and now I know a little bit more about it and how scary it can really be,” Rachel says. “But certainly the idea of being in public and seeing a camera in my face has become extremely normalised. That’s the reality of this situation and I’m coming to terms with it every day.” 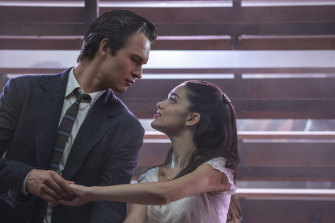 Ansel Elgort as Tony and Rachel Zegler as Maria on set.Credit:AP

Which brings us to Spielberg himself, the man who made the Indiana Jones movies, and E.T. The Extra-Terrestrial, and Schindler’s List. It seems incongruous to imagine him as a musical theatre nerd and yet it is indeed true.

Spielberg himself has, perhaps controversially, described West Side Story as the greatest score ever written for the theatre. (Certainly this is startling news to the Broadway cognoscenti who revere Les Misérables.)

“I’m going to do a controversial thing and agree with Steven Spielberg,” says Rachel, smiling. “West Side Story is dripping with nostalgia for so many people. It has withstood the test of time, with the most iconic melodies and lyrics that I’ve ever heard.”

Filming began in June 2019 and Rachel describes day one as daunting, even for a high school kid who had been headlining musicals. The first scene filmed was the one in which Tony and Maria meet.

“My first set-up was my first close-up, and then Steven yelled cut and said, ‘That is Rachel Zegler’s first take on film.’ And I wept.”

“I was so horribly nervous,” she says. “My first set-up was my first close-up, and then Steven yelled cut and said, ‘That is Rachel Zegler’s first take on film.’ And I wept.”

Equally affecting for her, she says, was her last day of filming, when Spielberg toasted her on set and proclaimed her to be “the greatest Maria” he’d ever witnessed. It’s an honour considering that previous actors in the role include not Natalie Wood, but Cher, who in 1978 starred in a one-woman version of the musical in which she played and sang all the parts.

“I’ll never forget it for as long as I live,” she says of the director’s praise. “And every time my imposter syndrome tries to tell me that there’s no reason for me to have success, I just remember that.”

Though she had grown up with Wood’s performance as Maria, Rachel says she steered clear of rewatching it in the lead-up to filming. “I did see it on TV when we were shooting, but I did not use it as a case study.”

“Rita had so many insightful pieces of information about the filming of the original, including her experience with the make-up and the suggestion at the time that she didn’t look Puerto Rican enough, which she was so confused by.”

The more potent connection to the original was the opportunity to work alongside Rita Moreno, who starred in the original and returns to this version as a co-executive producer alongside Spielberg and on-screen as Valentina, a reimagined version of the original character Doc, a drugstore owner who employed Tony.

“Rita had so many insightful pieces of information about the filming of the original, including her experience with the make-up and the suggestion at the time that she didn’t look Puerto Rican enough, which she was so confused by,” Rachel says. “And the way she bonded with her cast – Natalie and Richard Beymer [Tony], George Chakiris [Bernardo] and everybody – she told the most incredible stories.” 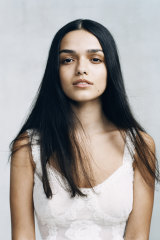 Steven Spielberg toasted Zegler on set and proclaimed her to be “the greatest Maria” he’d ever witnessed: “I’ll never forget it for as long as I live.”Credit: Stefan Ruiz/Headpress

And while Rachel talks about Spielberg with great respect, there is perhaps an unequalled reverence for Moreno. “She’s such a pioneer in being a Latina in this industry, breaking down barriers … advocating for herself the way that she did [and] the way that she still does,” Rachel says. “She’s such a loud proud voice. She’s a firecracker; she’s got a great sense of humour. And she’s all there – she turns 90 in December.

“We were so fortunate to have her as a resource, to have her as an executive producer, to have her as our Valentina. Her performance is incredible, it’s exceptional. It’s one of the best in her career, in my opinion. It’s so beautiful … she’s a blessing on this earth.”

Meanwhile, the actor, singer and YouTuber is preparing herself for the next phase of her career, a role in the superhero blockbuster Shazam! Fury of the Gods, to be followed by Snow White and the Seven Dwarfs. Does the future feel frightening or fabulous?

“It’s all of those things,” Rachel says. “And it changes every day because sometimes I think, what about this, or how do I subvert expectations and do something completely differently?

“I think that there’s a really cool aspect to not knowing what’s next, but I have ideas about my own future, and how I’d like to work in film,” Rachel says. “I would love to direct. I would love to write. It’s all possible. And that’s what I have to remind myself of. And to try not to lead with fear, otherwise I’ll never do anything, but also to use the fear to my advantage when I can.”

West Side Story screens in cinemas from December 26.

12/04/2021 Lifestyle Comments Off on ‘I was so horribly nervous’: Rachel Zegler on her first scene in West Side Story
Recent Posts