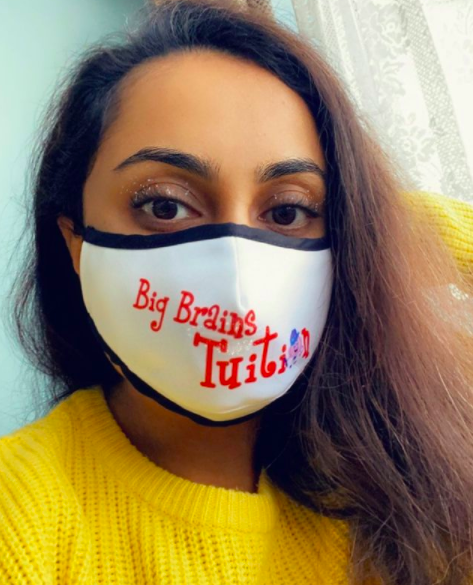 Maths can be daunting for pupils but the moment you see the penny finally drop in a child’s eyes… feels wonderful.

‘He’s finally understood – he enjoys doing fractions now!’ a relieved mum messaged me after weeks of her son feeling disheartened.

I’ve been a private tutor for over a decade. As my pupils’ face-to-face sessions switched to zoom calls when lockdown was announced last March, I started to wonder how children who don’t have computers or access to home wifi would cope.

Ofcom estimate that between 1.14m and 1.78m children in total in the UK have no home access to a laptop, desktop or tablet; that’s around 9% of families.

Although there was a Government scheme to make laptops and 4G routers available to children unable to access online learning during the pandemic, The Children’s Commissioner has since stated that was simply not enough.

So, worried some children may be getting left behind, I announced I’d do a free teaching session on Instagram after school hours while schools were closed.

I knew that about 42% of UK adults have an Instagram account so, even if some kids would be able to watch my lesson via a parent’s phone, that’d be something.

I teach ages five to 16 covering mainly Maths and English – and I asked my followers if there were any particular topics they wanted help with and to spread the word to other parents and pupils.

I’ve covered everything from percentages, fractions, decimals to creative writing and punctuation. Sometimes I play interactive games rather than teach a straight lesson, which brings energy to the live stream.

It isn’t a one size fits all approach – I’ll announce the subject and suitable age for the work I’m going to cover ahead of the broadcast so younger kids won’t feel lost and older kids won’t waste their time.

I was surprised how popular it became with kids and parents – I had many parents get in touch asking me to teach them how to teach a certain subject to their kids.

A lot of parents aren’t tech savvy and admitted to me they’d found it daunting to be thrown lots of logins and downloads and were expected to keep up.

Parents couldn’t be expected to instinctively know how to explain the topics to their children – the skills required for teaching go beyond a worksheet to fill in – and I wasn’t surprised many parents were feeling cast adrift.

I had spare time in my evenings to dedicate to some lesson planning and soon people all around the world were tuning in.

I’ve had anywhere between 100-150 tuning in live and many watch my videos at their own convenience. The creative writing lessons are interactive; having so many people involved is exciting.

I read out their suggestions aloud – not everyone wants to be vocal and that’s OK – people can watch along in silence as well or feel free to contribute.

The good thing about Instagram is people don’t need to put their hand up; I track the comments in real time.

It’s given me a great sense of satisfaction – I love to see kids learning and having fun at the same time – I aim to cover a range of topics from the syllabus and do it in stages so kids aren’t overwhelmed.

The Education Endowment Foundation conducted a study to assess what’s been coined ‘learning loss’ – the disadvantage gap as a result of the first UK lockdown – it measured Year 2 children (aged six to seven) with assessments taken in autumn 2020 sat by nearly 6000 pupils in 168 schools. The findings suggested pupils have significantly lower achievement in both reading and maths.

I’m sure most teachers will agree; you see a big difference in students after the summer break when they’ve had six weeks off. With schools closed for so long it will not add up to a deserving education.

There’s recently been discussion about extending school hours and changing summer holiday dates when the children do return to help them ‘catch up’ but a few extra weeks won’t make up for a year’s worth of missed learning.

Even when schools did go back, many students still missed weeks because they had to self isolate.

On average I’ve done two-three sessions a week and during February half-term next week I’ll do more sessions Monday-Friday.

Another teacher recently got in touch with me to offer some free science, history, geography and French lessons. It’s something we’ve trialed and I’ll be adding a lot more lessons over half term.

While I‘m stuck at home I’d rather use my time keeping my mind active and helping kids do the same; I’m convinced it’s how I’ve personally made it through lockdown still smiling.

I’ve had a huge amount of support from family and friends who have also joined in some lessons. My cousin is a make-up artist and suggested I get a ring light to properly film myself. I also bought a bigger board so it fills the screen.

I didn’t know what I was doing in terms of filming in the beginning, but I learned as time went by. It hasn’t taken over my life, but it gives me a reason to put nice clothes on each day and gives me purpose.

The best part of the job for me is inspiring possibilities. It’s not just about getting through the curriculum, it’s about planting that seed of curiosity which gives children the itch to explore.

I’ve connected with people out there that I wouldn’t have previously met which is great, plus positive feedback from parents and kids makes it feel worthwhile.

One parent recently thanked me for a creative writing session saying, ‘45 mins later and she’s still writing! Clearly got inspired!’

I get to build a rapport with parents and the kids which is quite a unique privilege.

Instagram has broken down a barrier for parents who are unsure whether to bother their child’s own school teachers – as they’ve got so much to juggle – and if my answering some queries takes a load off their shoulders then all the better.

I’m not trying to step on any toes or confuse kids with a different approach to teaching – my lessons aren’t meant to replace schools’ set work, they’re an addition.

You cannot replace the face-to-face benefits of being in a classroom but, for now, if social media can be used to ease the pressure for kids, parents, and teachers then I’m pleased to be doing my bit.

I’ve so much respect for all teachers trying to teach in the classroom and via video and for parents trying to do it all.

There’s still 30-40 topics left on my list of requests so I’ve plenty to keep me going, and there’s no danger I’ll get bored before lockdown’s over.

My followers are enjoying it – I’ll continue so long as they are.

You can find Rupal Ragha’s ‘BigBrainsTuition’ sessions on Instagram here.