This little boy told me once he’d seen his grandmother momentarily turn into a poodle. I was a little fellow myself: we were waiting for our mothers to pick us up after school. Ordinarily, he didn’t speak to me because I was the resident weirdo, but in this instance, who else could he tell?

I’ve since decided that at six years old he still had plenty of his hallucinogenic baby-brain that sees everything very intensely, to the point of magical distortion. His grandmother probably made a funny face and her hair was a certain way and, hey presto: there was a brief glitch in the universe and she became a dog. 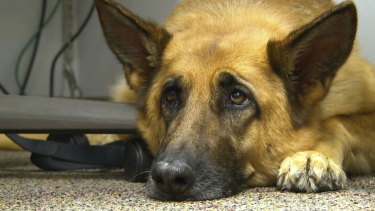 A study released this month suggests that over thousands of years of dog domestication, people have preferred those that can pull off the ”puppy dog eyes” look. And that encouraged the evolution of the facial muscle behind it.Credit:Alex Sanz

There was another kid, in high school, who I assumed had dogs at home because of the way he routinely made the big, cute, love-me-please dog eyes that some people lose their minds for.

He managed to get out of all sorts of trouble, with teachers and the usual standover thugs in training and so forth. He was also impulsive: going out of his way to make trouble, as if to test the limits of his beagle-like enchantment. And yet he never talked much.

Somehow I ended up at his place one day and there were no dogs at all. If he had any feeling for them at all, it was as a competitor.

You see, girls really loved him. The things they said most to him were “awwwww" and “cuuuuute”. But if they were in his company and made similar noises towards a bona fide dog and those same love-me eyes, well, it was the only thing that ever seemed to bring him down.

He was a mystery to me for nearly 50 years. My latest theory is he came from that folkloric line of people raised by wolves, some ancient grandfather who was eventually taken in by people, only to evolve in human company as dogs did once domesticated.

I’m thinking this because UK researchers have just published a study that found dogs, evolving away from the wolf, eventually developed a small muscle over the eye that allowed them to make pleading faces to their masters.

“Interestingly,” the authors wrote, “this movement … resembles an expression humans produce when sad, so its production in dogs may trigger a nurturing response.”

So, hellooooooooooooooooo, to my old school friend. I imagine you’re still out there, making those eyes. On the other hand, you’d be pretty old in dog years by now.