"People have grown, they understand a bit more about things, about First Peoples in particular," he said. "I feel more Australian now, I feel more part of the broader community rather than a sub-group or a subculture." 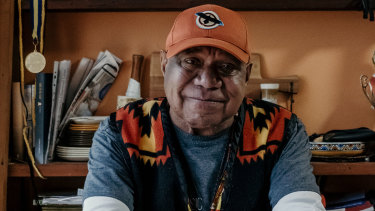 Archie Roach is the 2020 inductee to the ARIA Hall of Fame.Credit:Jo O’Keefe

Roach, who will be inducted into the ARIA hall of fame at the upcoming ARIA Awards on November 25, says he "didn't really have any idea the kind of impact" the intensely personal album would have. It was an early example of Indigenous artists telling their story to a mainstream audience through music, and Roach is credited with playing a major role in the conversation around reconciliation.

"When you have written a song and perform a song you just hope people listen to it," he said."I am glad that I was among the first people that opened up about that and began that conversation."

Roach is just the fourth Indigenous performer to receive the hall of fame honour, with ARIA CEO Dan Rosen describing him as "an artist of enormous integrity, writing songs of deep personal honesty that resonated all around Australia".

"He told stories that no one else was telling, and brought these issues to the forefront of the Australian psyche," Rosen said. "His thirty-year career on stage is enough for him to be a legend, but it is matched with his off-stage activism and his tireless work to give back to the communities around him. He's a man who has made the world a better place, and he rightly takes his place as a giant of Australian music."

Charcoal Lane bagged Roach his first two ARIA wins, for best new talent and best Indigenous release. He went on to be nominated another 14 times, winning a further three awards for Hold on Tight and Looking for Butter Boy.

This year he is nominated for three awards for his album Tell Me Why: best male artist, best adult contemporary album and best independent release.

Roach paid tribute to his team members, many of whom have been with him since Charcoal Lane was released – including record label boss Michael Gudinski.

"The people that have been with us since day one are still around me today. Michael has been with me since the start," Roach said. "They always seem a lot happier and more thrilled than I might be. I can be happy but I don't have to do cartwheels and jump up in the air but it is a great honour and a pat on the back."

Roach said he was still finalising how he would mark the occasion during the ARIA Awards later this month – but it will involve a performance during the ceremony, which will be broadcast on Nine (the owner of this masthead).

11/12/2020 Lifestyle Comments Off on ‘It is a great honour’: Archie Roach to be inducted into ARIA hall of fame
Recent Posts
We and our partners use cookies on this site to improve our service, perform analytics, personalize advertising, measure advertising performance, and remember website preferences.Ok