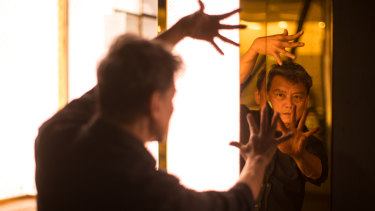 Then, one day, "I put my camera on the ground and I danced".

"The moment I went out, it was liberating," he says. "I was embodying the place. It felt good."

His dances are part self-reflection and part a response to "triggers" in his surroundings, he says.

"I knew my limits, and that gave me a new freedom within the bounds of those constraints. I found a peace in looking at these places, which are kind of forgotten in normal times," Yap says. "It felt like a different kind of observing, a freedom of not having to rush, a lengthy way of looking at things.

"And inevitably, it reflected on me, it stirred old memories, it gave me a sense of spontaneity." 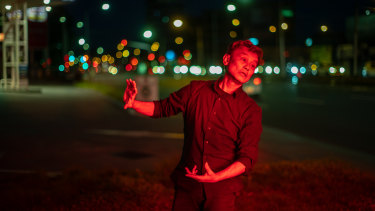 Malaysian-born Yap is a fixture of the city's contemporary dance scene – and has always forged his own path with work that blends "psycho-physical research, Asian shamanistic trance dance, butoh and psycho-vocal experimentations".

He says the quiet of the current lockdown is "actually quite good for focus, for a reflective time" – though it's bad for business.

He has performed at the Melbourne International Arts Festival, Sydney Opera House, Shanghai Conservatory and Malaysia Dance Festival. He has won awards – including a Green Room Award for best male dancer in 1999 for The Decay of the Angel, about the death of his father.

From that show's success, he says, "I kind of realised that I did not need to follow some form; I can just find my own idiosyncrasies".

He put a photos and videos of his iso-dancing on social media and was surprised by the positive response, with thousands of views and many supportive comments.

"I'm still trying to find out why," he says. "A lot of people say thank you. Someone literally said: 'You've helped me through this time.' Wow."

He's also been contacted by musicians who have asked him to perform to their compositions, opening up new opportunities for collaboration.

He hopes to continue, even after health restrictions ease, finding new ways to respond to urban environments and encouraging others to dance in public, too.

"You don't need a platform, a stage, to perform," he says. "I think this will continue."

09/17/2020 Lifestyle Comments Off on ‘It was liberating’: in his bubble, Tony dances alone
Recent Posts