Those in the art world might know what an ARI is, but to most it’s an unfamiliar acronym. And that’s part of their point: ARIs (artist-run initiatives) are collectives for artists, by artists, that offer space for experimental works outside of traditional galleries and museums.

But such initiatives will be given a rare mainstream platform with the exhibition No Show to open free to the public at Carriageworks next month. 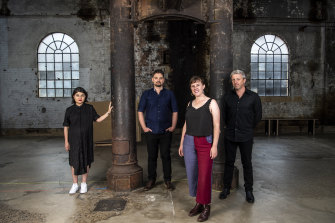 “It’s actually a really exciting way to profile, and really shine a light on what’s going on,” Daniel Mudie Cunningham, director of programs at Carriageworks, said. “And often, it’s right under peoples’ noses.”

Bringing together 11 ARIs comprising more than 50 artists from across NSW, No Show — which takes its name from the absence of exhibitions over the last year — will highlight emerging and early-career artists who often can not access or afford such prime exhibition space.

“Initially, the idea was really to hand over the space and to give the space back to a number of artists,” Mudie Cunningham said. “It was kind of practical to be able to hand it back, but it was also a gesture of support, because it’s those [artists] that require that level of support in order to operate.”

The inaugural exhibition will be a revolving door of installations, performances and residencies. Kate Brown, co-director of Parramatta Road studio and gallery project Our Neon Foe, will perform using a throat microphone. Jaycee Kim, from social enterprise Studio A, will create a rainbow plait sculpture made from pool noodles. Camperdown KNULP’s conceptual Good Will Hunting will explore the interplay between art, labour, funding and philanthropy. Independent arts publication Running Dog will have also have three writers creating new work over the course of the show’s run.

The works will be housed within modular structures, made from a mix of recyclable and off-the-shelf materials and designed by Sydney architects Youssofzay + Hart, in the main hall of the historic Eveleigh rail yards. 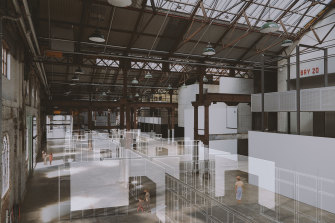 “We were very careful to work with the industrial characteristics of Carriageworks,” says Belqis Youssofzay, co-founder of Youssofzay + Hart.

“But at the same time, to come up with an imaginative spatial installation that wasn’t your typical ‘white pristine boxes’.

“The basis of [the] concept was to create a series of discrete but connected spaces to display the 11 exhibiting ARIs but at the same time, [make it] an architectural or spatial installation that acted as more of a frame; something that wasn’t going to burden the artists and their work.” 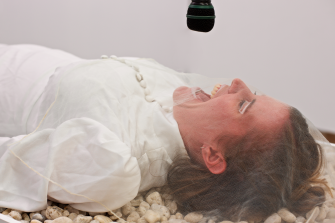 Youssofzay said they had worked to a tight deadline, with only two months to finalise and install the show. But Neon Foe’s Kate Brown said that for the ARIs exhibiting, pulling works together with a moment’s notice is the status quo.

“One of the main concerns for everyone was that it was such a quick turnaround,” Brown said. “But I assured [them] that artist-run spaces are so used to just running with something, and getting things off the ground.”

And the sentiment is shared by Mudie Cunningham, whose early-career work with ARIs including MOP Projects, and other community programs, put him in a prime position to spearhead the exhibition in the face of COVID-19.

Mudie Cunningham said No Show, and the artists involved, will crystallise what ARIs and their communities are all about.

“It’s about collectivity. And it’s about coming together with shared resources,” he said. “Having the energy and the passion to really just make stuff happen, staying up late at night, you know, just being really active and engaged.”

No Show will be at Carriageworks from February 12 to March 7.

01/28/2021 Lifestyle Comments Off on ‘It’s about collectivity’: Carriageworks brings artist-run initiatives to the fore
Recent Posts