I made a mistake on my commute to work this week.

On Wednesday, dopey at 5.40am, I took a right instead of a left and then made a bad decision and ended up on the main flyover of the A4 heading into London.

This would not matter if I was in a car – but I was on a bicycle. 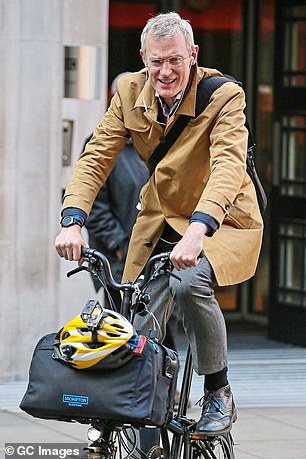 I made a mistake on my commute to work this week, writes Jeremy Vine (pictured)

Because it was very early, there were not many vehicles, but those that passed me were doing up to 60mph.

I was lit up like a Christmas tree but my modest 12mph on this uphill stretch of overpass meant I was effectively barrelling backwards towards the oncoming cars, and in the dark I wasn’t sure they could tell.

I survived. At some point the mad mile calmed down and I was back in a more normal road layout.

I breathed a sigh of relief. Which is when it struck me – what I’d just done was trespass on space designated exclusively for motor vehicles.

Had I been knocked off, there would not have been even an ounce of sympathy. ‘He shouldn’t have been there.’

There was a time when every road in our cities was like that.

In a painful altercation with a cab driver recently, where I had to point out I had the right to cycle in the same space as him, he bellowed back: ‘Cars were here first!’

When I told him the first penny farthings arrived in the 1880s, and the first car journey was not until 1894, he replied ‘Your dancing’s crap as well’, which I assume was a reference to my time on Strictly.

Can I tell you why I cycle? At 6ft 3in, I could eat as many jam doughnuts as I wanted. For years I binged on croissants and crisps and just got thinner.

Then, in my mid-40s, my metabolism slowed and I became large and miserable. I remember crawling after my young child while playing at home and feeling, for the first time, a thick fold of skin on the back of my neck. 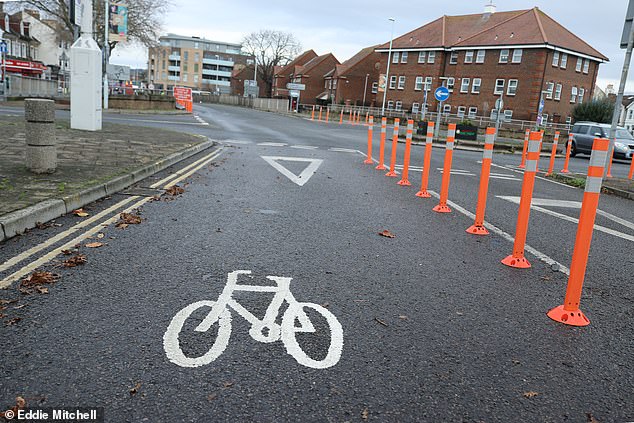 Had I been knocked off, there would not have been even an ounce of sympathy. ‘He shouldn’t have been there’ (pictured: Cycle lanes which will be removed)

In protest I left my utterly ineffective gym (I can’t blame them – I never went) and decided to make my seven-mile commute my daily exercise.

After years in cars, trains and buses, getting a bicycle was a revelation – like getting wings.

Suddenly I could move around the city I live in and time my journeys to the minute; rapidly, I dropped from 15st to 12st.

Whoever said a bicycle is ‘a flying machine powered by muffins’ got it bang on.

In Central London, the average daytime speed of a car, pre-Covid, was 7.8mph. On two wheels, I average 9.8mph.

But as I cycled, I got angry. I got angry every time I saw that a fellow commuter cyclist had been killed – the victims often young, smart, professional women, their lives suddenly ended by a truck turning left.

I got angry as I began to grasp the unacceptable level of physical danger I was exposed to as impatient drivers pushed past me or turned across me at lights and junctions.

I got angry as I watched car adverts that made breaking speed limits look sexy and boasted of safety features which protected only the driver, not the person they hit.

Then came a ray of light. The thinking time brought by Covid led councils across the country to install pop-up cycle lanes.

I was deafened by the sound of pennies dropping everywhere – councillors suddenly grasping that the more we widen our roads, the more people drive.

The more people drive, the more road death, obesity and pollution there is: motor vehicles kill five people a day, whereas bicycles kill one or two a year.

One of the most astonishing statistics tells us that motorists in London drove a total of 22.6 billion miles in 2019 – across only 9,000 miles of road!

So we know that if we pave over the whole of Britain, it will just create one monstrous traffic jam, and the inescapable conclusion is that road space needs to be taken from motor vehicles and given to more active forms of travel… yep, cycling foremost. What could be less contentious?

Silly me. I simply didn’t reckon on the opposition. I didn’t see the sheer fury on the horizon.

In my own neighbourhood, a respected Catholic priest said a cycle path would ‘do more harm than the Luftwaffe’, while his church notices announced: ‘There is much to pray about in the world, and the 10.30am daily public recitation of the Rosary in church will also be praying for success in turning the plans for the CS9 [cycle lane] away from the High Road and the church.’

A local councillor gleefully reported how a resident told her that Chiswick – one of London’s most pleasant suburbs – had become ‘like Belfast during the Troubles’.

In a hilarious video that went viral, three local politicians complained that the cycle lane would ‘destroy the village feel of Chiswick’ – uploading the footage before they realised their words had almost been lost in the din of passing trucks.

For his pains, he is frequently abused on social media. ‘F*** off, get the f*** out from Hackney, you d***head!’ tweeted a motorist angry that a full nine minutes had been added to his journey home.

The heavy planters that now block Hackney’s rat-runs are constantly vandalised, and Burke received one note which read: ‘Open all roads now or we will get violent. We intend to burn down your house while you are sleeping.’

Somewhat more civilised, the actor Nigel Havers has also waded in. Havers, known for his role in Chariots Of Fire, misses the days when his local high street was like a scene from Ben Hur.

He wrote in this newspaper last week that his ‘brisk morning walk’ in Kensington had been ruined by ‘the smell of pollution wafting from hundreds of cars, vans, lorries and buses stuck nose-to-nose’.

He blames ‘these dreaded new cycle lanes which have caused havoc across the country’. Nigel, if I may.

The dread you speak of was felt by anyone travelling down your lethal high street before the cycle path arrived – unless, of course, they were encased in two tons of protective metal.

Even now, barely one per cent of London’s roads has any kind of segregated cycle space, and I think you’ll find the last time there was ‘havoc across the country’ was during the Second World War.

Crucially, traffic jams are caused by traffic. If you must shake your fist at the cause of the pollution, shake it at the cars. It’s the chariots that are smoking, not the bicycles!

Let’s do a deal, Nigel. You rip out the safe cycle path and we cyclists will swap our bikes for exhaust-burping, child-crushing SUVs. Then we’ll head for your borough and see how that reduces the jams.

Make no mistake – cycle lanes will save lives. But it will take a while before they start to be used by the number of people the critics demand they see. We didn’t wait till planes were in the air to start building airports.

In the meantime, we all need to be patient. I own a car and probably drive a paltry 300 miles a year, but when I am behind the steering wheel I understand the terrible feeling of impotence that afflicts all city drivers: this thing says 120mph on the speedometer, so why I am going at only 15mph?

Here’s the deal. I’ll stay off that flyover if you’ll just give me a single protected lane between my home and work. That way, we can all be happy. And hopefully stay alive.

11/28/2020 Lifestyle Comments Off on JEREMY VINE: Scrap cycle lanes and I'll swap bike for Chelsea tractor
Recent Posts
We and our partners use cookies on this site to improve our service, perform analytics, personalize advertising, measure advertising performance, and remember website preferences.Ok