Jim Steinman, who wrote all the songs on Bat Out of Hell, Meat Loaf’s operatic, teenage-angst-filled 1977 debut album, which remains one of the most successful records of all time, died on Monday, US time, in Connecticut. He was 73.

His long-time manager, David Sonenberg, announced the death. He said that Steinman had a stroke four years ago and that his health had recently been declining. 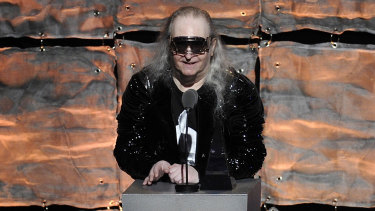 Jim Steinman, pictured in 2012 at his induction to the Songwriters Hall of Fame, has died at the age of 73. Credit:AP

Steinman had a wide-ranging resume that included writing Bonnie Tyler’s 1983 No. 1 hit Total Eclipse of the Heart and serving as Andrew Lloyd Webber’s lyricist on Whistle Down the Wind (1996). But his career-defining achievement was Bat Out of Hell, a record that no major label wanted but that has now sold tens of millions of copies.

Although the various lists of the top sellers differ in how they compile the rankings and categorise albums, Bat Out of Hell routinely lands near the top of any such list, along with albums like Michael Jackson’s Thriller and the Eagles’ Their Greatest Hits and Hotel California.

Appearing at a time when disco and punk were in vogue, Bat Out of Hell was defiantly different. It contained only seven songs, all of them heavy on drama and influenced by the opera music Steinman had loved since he was a boy.

Bat Out of Hell sold slowly at first but eventually took off, propelled by Meat Loaf’s exhaustive touring and some favourable radio play in a few markets. It was one of Steinman’s earliest successes, and it had recently come full circle in a sense: Bat Out of Hell: The Musical, a stage production written by Steinman, opened in Manchester, England, in 2017. Its story, a sort of post-apocalyptic Peter Pan, was something Steinman had envisioned almost 50 years ago.

“This was meant to be a musical,” Meat Loaf told The New York Times in 2019, when the show had a brief run at New York City Centre in Manhattan. “I made it a rock show. Jimmy turned it around and made a musical. That’s what he wanted it to be.”

Meat Loaf and Steinman collaborated again on Bat Out of Hell II: Back Into Hell, a 1993 album that yielded another Meat Loaf hit, I’d Do Anything for Love (but I Won’t Do That). Among many other songs, Steinman also wrote It’s All Coming Back to Me Now, a top 10 hit for Celine Dion in 1996.

His works tended to be vivid in their imagery and heavy on drama. “Most people don’t like extremes,” he once said. “Extremes scare them. I start at ‘extreme’ and go from there.”

Some detractors called his songs schlocky, but not Meat Loaf.

“Every Jim Steinman song is alive,” he told The Lancashire Telegraph of England in 2016, when Bat Out of Hell: The Musical was preparing to open. “It’s not just pen on a piece of paper. It lives, it walks around, it haunts you, and it’ll eat at your heart and soul.”

Meat Loaf and Steinman had their differences over the years, including legal ones, but they continued to work together. Meat Loaf’s Bat Out of Hell III: The Monster Is Loose, released in 2006, wasn’t a pure collaboration like the previous two Bat Out of Hell albums, but it did include some Steinman songs. Braver Than We Are, Meat Loaf’s 2016 album, again consisted of Steinman songs.

04/21/2021 Lifestyle Comments Off on Jim Steinman, Bat Out of Hell songwriter, dies at 73
Recent Posts