Kamala Harris’ stepdaughter Ella Emhoff has appeared in her first designer fashion show, just three weeks after it was announced that she had signed with IMG Models.

The 21-year-old — who is the daughter of Harris’ husband, Doug Emhoff, and his first wife, Kerstin — had turned the heads of fashion fans at President Joe Biden’s inauguration on on January 20, where she wore an embellished Miu Miu coat. 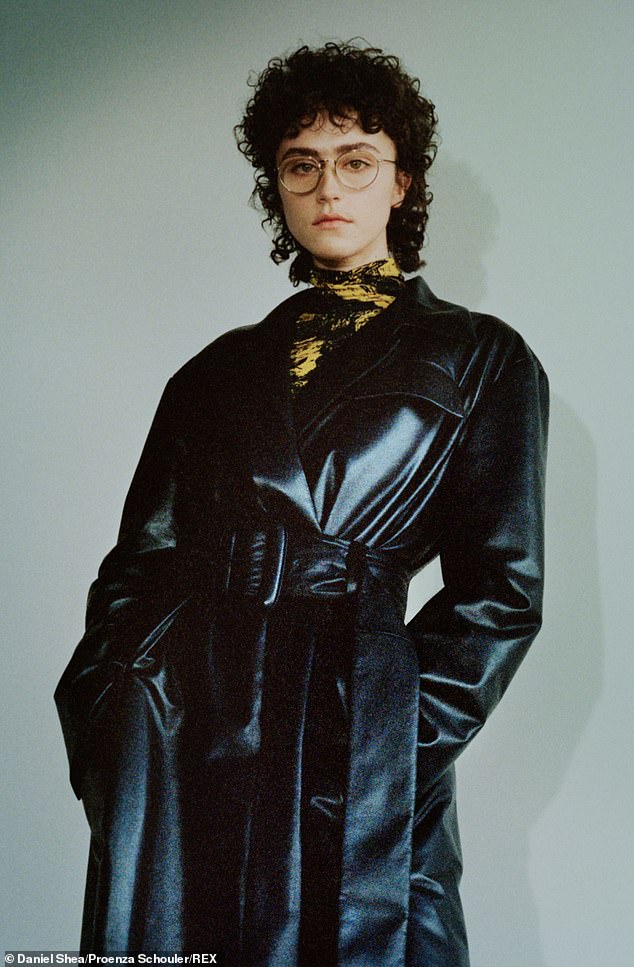 Voila! Kamala Harris’ stepdaughter Ella Emhoff has appeared in her first designer fashion show, just three weeks after it was announced that she had signed with IMG Models 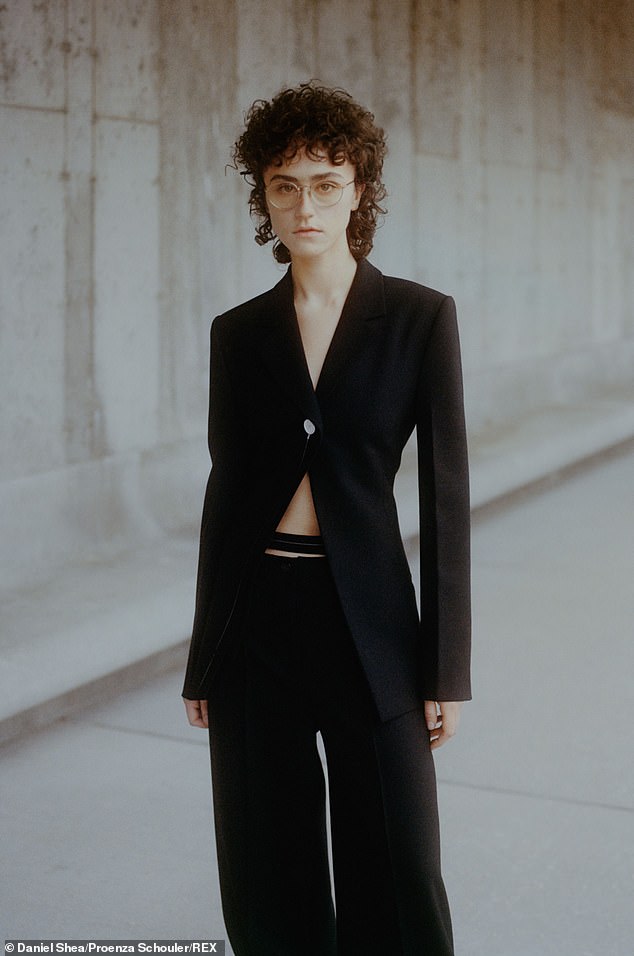 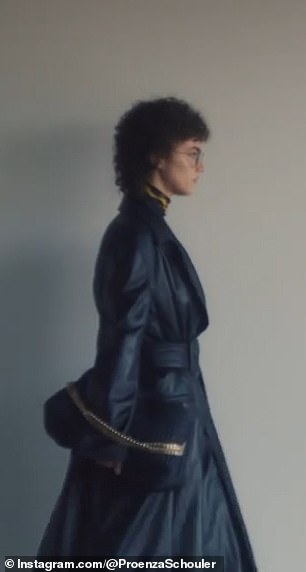 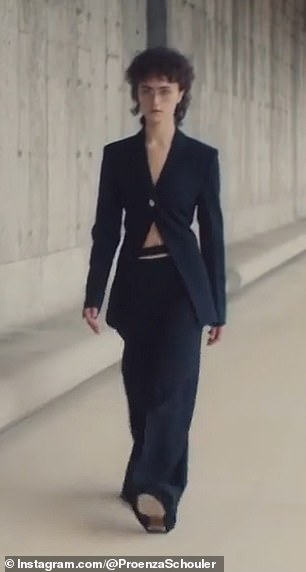 According to Proenza Schouler’s Instagram, Ella was styled by Brian Molloy, her hair — left in her natural curls — was done by Mustafa Yanaz, and her makeup was done by Diane Kendal 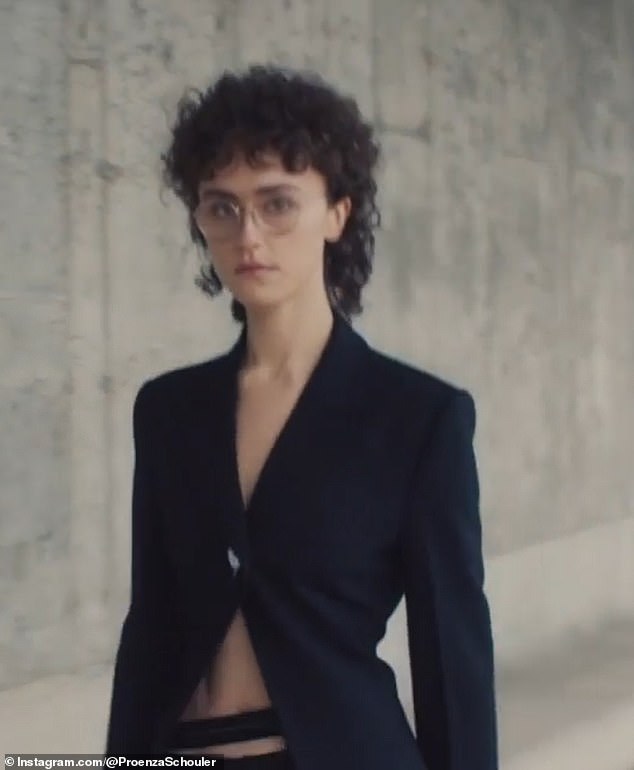 Pumped! Ella hasn’t said much about the big debut, only thanking the brand on Instagram with a heart 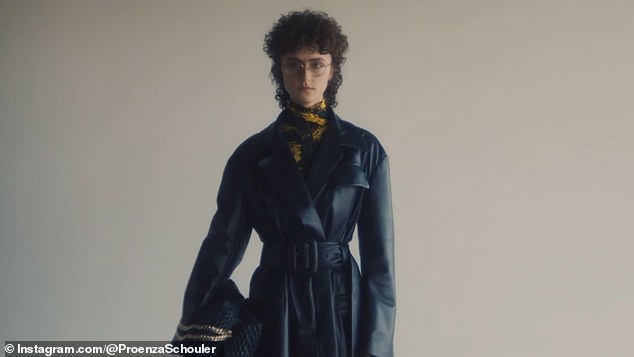 Pandemic fashion show: According to Vogue, the fashion show was actually filmed two Sundays ago on Long Island

According to Vogue, the fashion show was actually filmed two Sundays ago on Long Island, but everyone involved — including designers Jack McCollough and Lazaro Hernandez — kept Ella’s involvement a secret until today, when video and imagery from the event was posted online.

Ella’s first outfit included oversized gray slacks with a matching, below-the-knee gray coat, which were accessorized with furry shoes and a large tote.

She also modeled a black leather trench, and then had the honor of closing the show in a slinky black suit, worn with a button fastened at the chest and her stomach exposed.

According to Proenza Schouler’s Instagram, Ella was styled by Brian Molloy, her hair — left in her natural curls — was done by Mustafa Yanaz, and her makeup was done by Diane Kendal.

She also participated in a Q&A with the designers on February 15.

It’s as yet unknown whether Ella has any other surprises up her sleeve, though New York Fashion Week ends this weekend.

The appearance marks her first professional modeling gig since signing with IMG last month, joining the ranks of Gigi Hadid, Kate Moss, and Alek Wek, who are also signed by the agency.

‘It’s not really about shape, size or gender any more,’ said Ivan Bart, the president of IMG Models.

‘Ella communicates this moment in time. There’s a cheekiness and a joy she exudes.’

He said his response to seeing her at the inauguration was: ‘Wow, she’s communicating fashion.’

Ella said the approach from Bart took her back, even though she had been dabbling in modeling for a smaller agent. 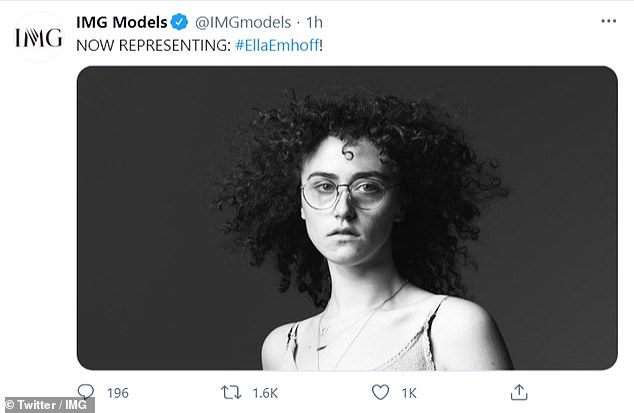 ‘Ella communicates this moment in time. There’s a cheekiness and a joy she exudes,’ said Ivan Bart, the president of IMG Models. 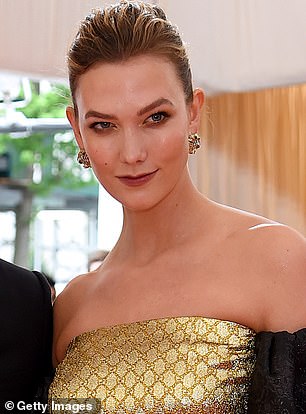 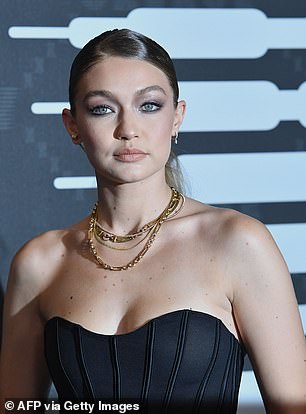 ‘I was pretty surprised when everything with IMG was happening because when I was younger, I never saw that as being part of my timeline,’ she told The New York Times.

‘As someone who, like a lot of young girls out there, had self-confidence issues, it is intimidating and scary to go into this world that is hyper-focused on you and the body.’

She said she was encouraged by the diversity of models working today, and the opportunity to be ‘part of that change.’

‘I’ve obviously got a bigger platform now, and I’m excited to share a lot of things I really care about, and do some good,’ she said, adding that she was ‘excited to do things like wear fun clothes’ and ‘to bring a bit of Bushwick into the high fashion realm’.

She also hoped to fundraise for knitwear artists, adding: ‘There are a lot of people out there that need a lot of help,’ If I can do anything to help with that, I want to, and I think this opportunity will be really beneficial toward that.’ 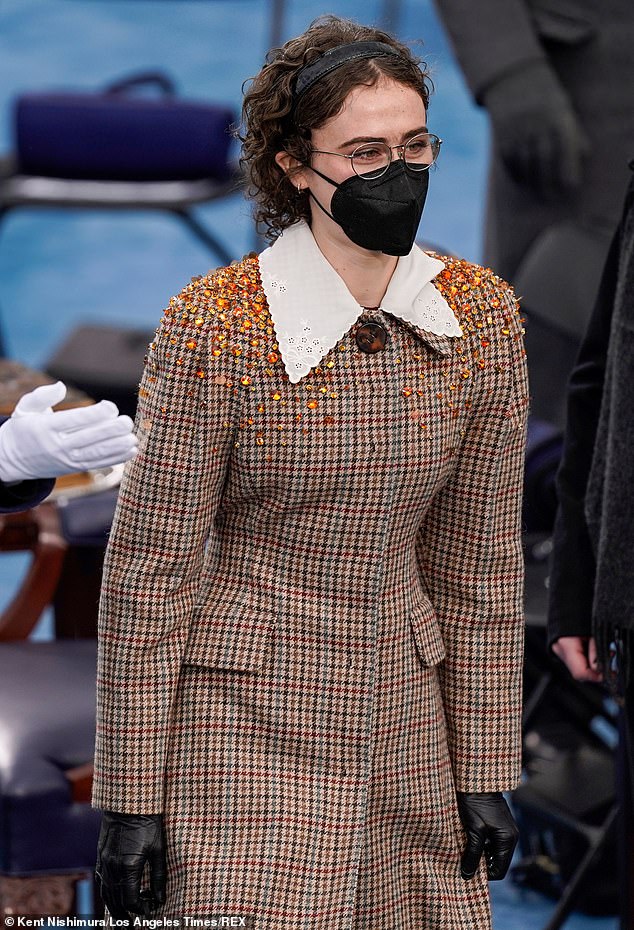 Attention! Most of the American public took notice of her at the inauguration 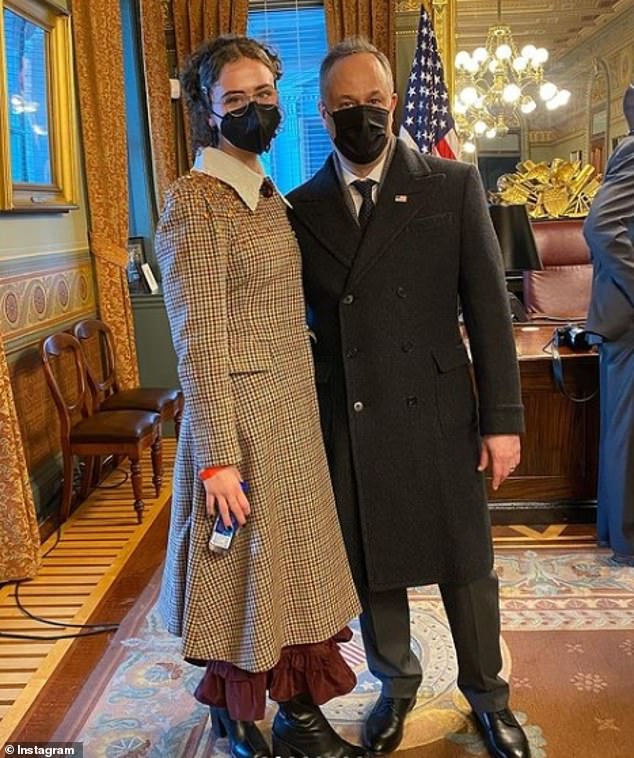 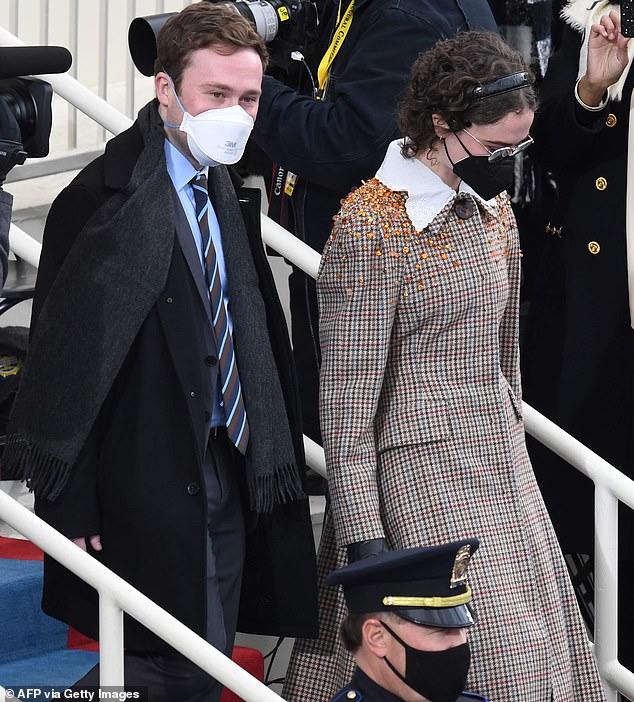 Head-turning moment! The 21-year-old walked out with her brother Cole, 26, and quickly drew attention with her quirky sense of style 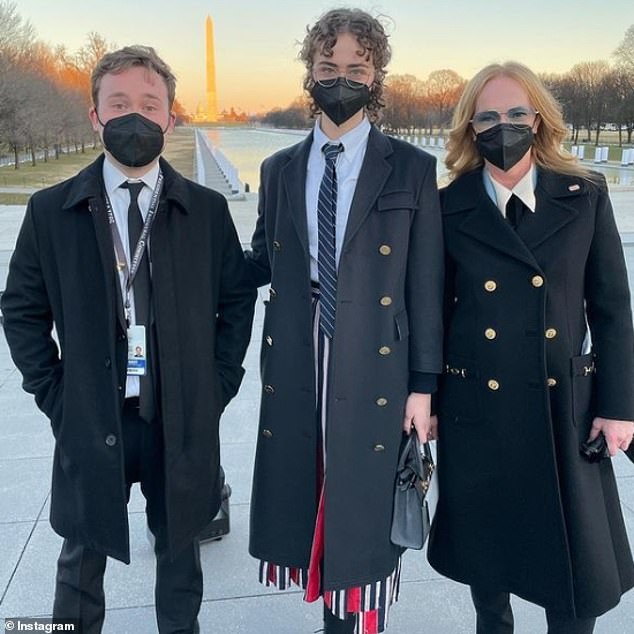 Hours before, Ella wowed in a preppy white shirt and tie tucked into a striped Thome Browne pleated skirt in the colors of the US flag as she posed with her mother and brother at the Lincoln Memorial on Instagram

Bart told the paper he noticed Ella at a fundraiser for Harris during the presidential primaries, and they began talking about the possibility of her joining IMG last summer.

Most of the American public, though, took notice of her at the inauguration.

Hours before the inauguration, Ella posed for pictures at the Lincoln Memorial with her mom and brother, Cole, and was already dressed to impress.

She went for a preppy, polished vibe, teaming a collared button-down-shirt with a patriotic red, white, and blue pleated skirt from Thom Browne’s Fall 2020 collection. She topped it all off with a chic long coat, a necktie, and a small hand-held bag.

But it was at the inauguration ceremony itself that Ella caught international attention, walking out with her brother.

There, she turned heads in a mid-length wool Miu Miu coat, with a plaid pattern, a cinched waist, and pockets at the hips. At the top was a contrasting white collar and orange-gold crystal embellishments. 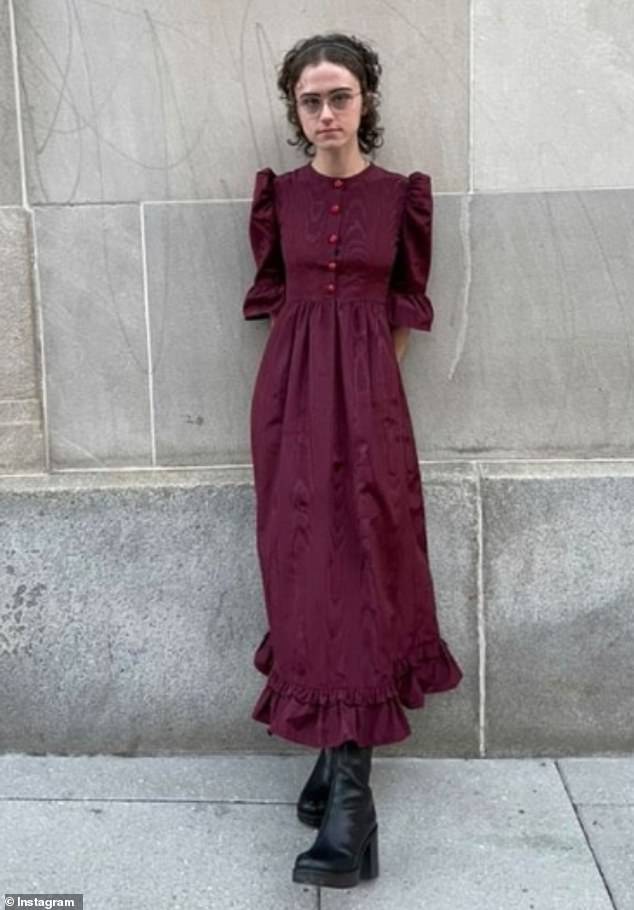 Underneath, she later revealed she was wearing a  burgundy tea dress from independent New York designer Batsheva Hay.

Her looks have already caused a stir in the fashion world, with Teen Vogue calling her the ‘cool girl’ of the Biden-Harris administration, Vice branding her a ‘slow fashion king,’ and British Vogue saying the coat was the ‘first viral moment’ of the new Presidency.

Her brother even commented on the look, taking to Instagram to say he was behind the scenes with Ella ‘The Coat’ Emhoff.

Speaking to Vogue, Ella, who is in her final year at the Parsons School of Design in New York, explained how she had the bespoke look made.

‘My mood board was very “little girl,” in a sense, a lot of scalloped collars and big silhouette shoulders and small buttons.

‘I was going for something girlier, to embrace my feminine side — especially after that suit that I felt so great in — because, like, how many times do you prepare yourself to attend an inauguration? This momentous of an event deserves a momentous outfit,’ she said. 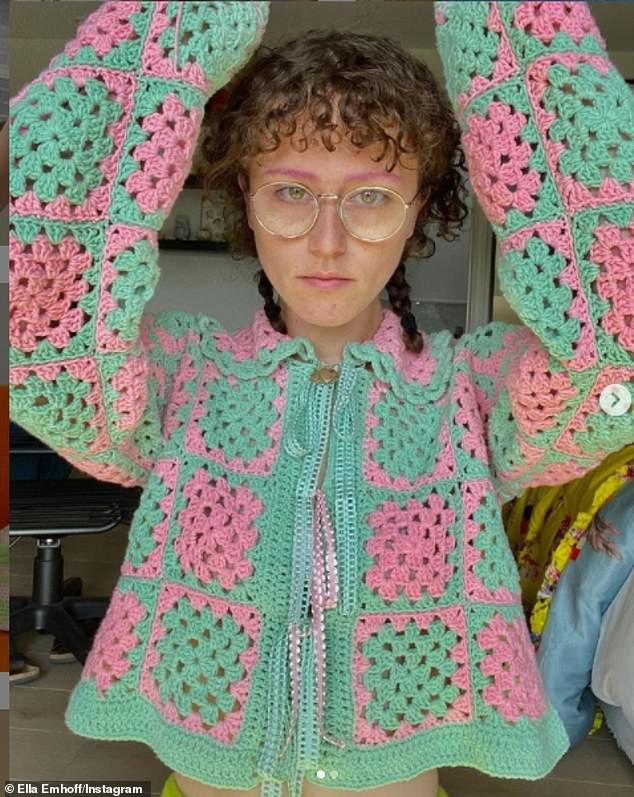 Fans who have followed Ella on Instagram are familiar with her sense of style. She is currently studying textiles at Parsons in New York, and specialized in knitwear 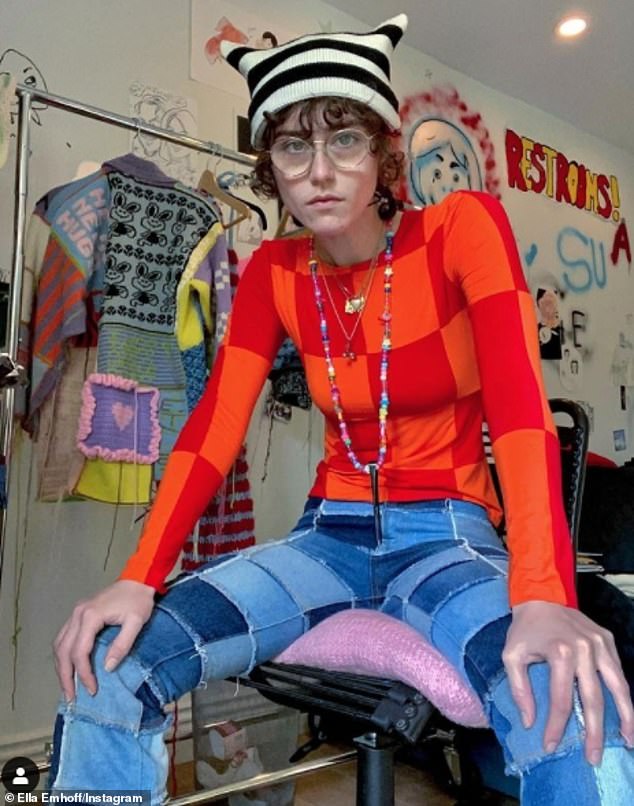 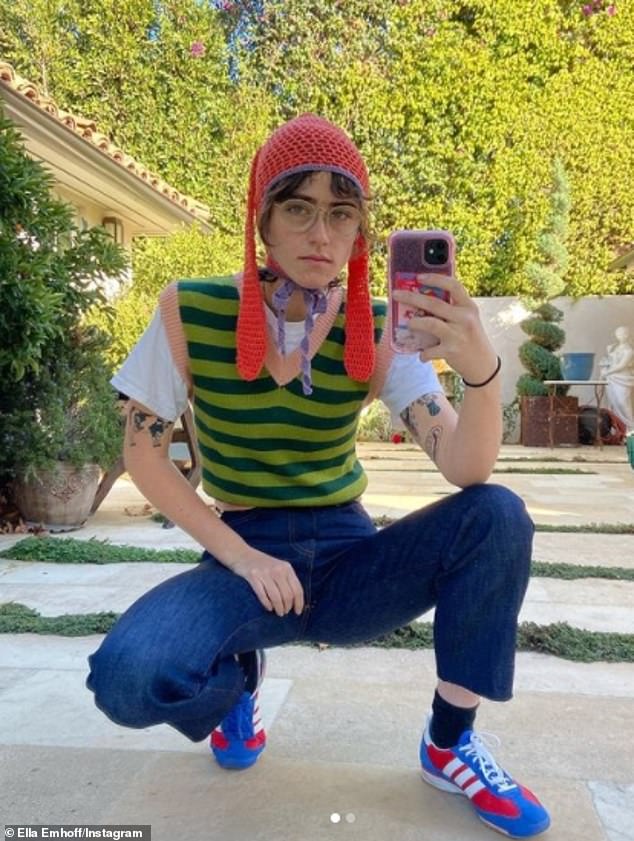 ‘I think the idea of sharing our parents with the world is kind of insane,’ she admitted

As for the burgundy dress by Batsheva Hay she wore underneath her coat, she added: ‘Something that’s really important for me, especially with people I wear, is: I want to be able to see them as an artist and as a designer, and work with people who I really respect.

‘I love New York for its fashion community, especially the parts that are created through Instagram, so working with a designer from that scene who was able to create something formal was perfect.

Fans who have followed Ella on Instagram are familiar with her sense of style. She is currently studying textiles at Parsons in New York, and specialized in knitwear.

‘I think the goal is definitely to have my own knitwear brand, label, whatever you call it,’ she told Garage. ‘Setting up a shop, most likely online of where I can just have a bunch of different pieces that I’m constantly creating and doing my commission-based work and having that all be in a shop.

‘I’d like to try and stay a one-woman show, but I think as stuff has started ramping up with my knitwear, it’s been harder. I’m only one woman, I can only make so many commissions while I’m also trying to just enjoy life.’