Moving on. As Katie Thurston continued to look back on her Bachelorette journey via her “12 Days of Messy” campaign about her exes, she candidly opened up about “trying” to navigate her new normal.

“Dear @taylorswift, I’d like to be my old self again, but I’m still trying to find it,” the former bank marketing manager, 30, captioned an Instagram Story slide on Friday, November 19, shortly after completing “Day 8” of her social media challenge, in which she dedicated “22 (Taylor’s Version)” to show alum Hunter Montgomery.

The Washington native added in her social media upload, “Can you help me deliver A Message from Taylor to someone from my season?,” which referenced a letter that Taylor Swift recorded for her fans via Apple Music. 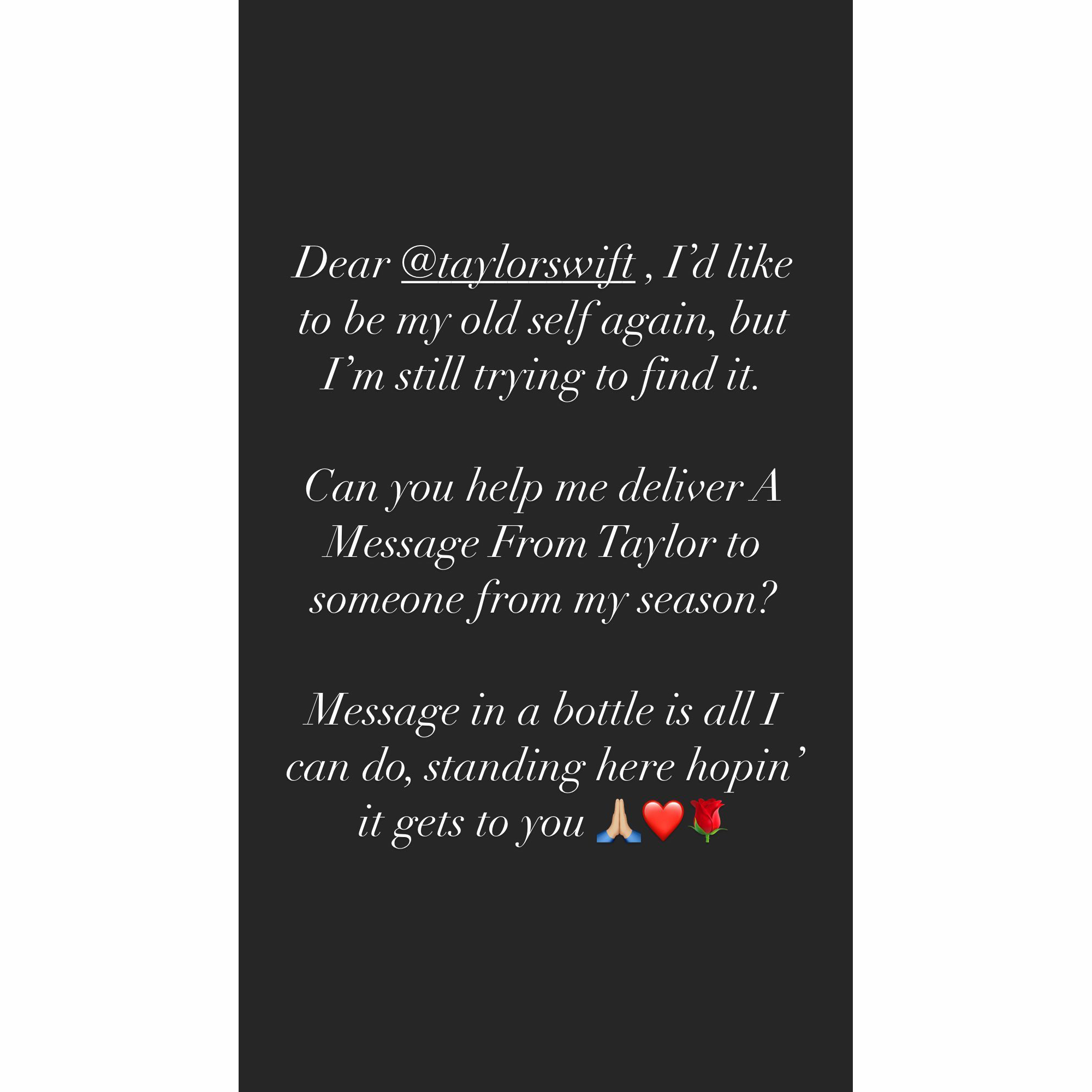 “Musically and lyrically, Red resembled a heartbroken person,” the “Starlight” songstress, 31, explained in a voice recording, which was released alongside the Apple preorder for Red (Taylor’s Version), which was distributed on November 12. “It was all over the place. A fractured mosaic of feelings that somehow all fit together in the end: Happy, free, confused, lonely, devastated, euphoric, wild and tortured by memories past. These are the original thirty songs that were meant for Red. I love you guys.”

The season 17 Bachelorette even concluded her Friday social media upload with another reference to the Pennsylvania native, quoting her lyrics from “Message in a Bottle (Taylor’s Version.)”

“Message in a bottle is all I can do, standing here hopin’ it gets to you,” Thurston concluded on Friday, adding emojis of praying hands, a red heart and a red rose.

The Bachelor season 25 alum previously confirmed her split from ex-fiancé Blake Moynes in October, less than three months after their whirlwind proposal aired during the Bachelorette finale.

“It is with mutual love and respect that we have decided to go our separate ways,” the San Diego, California, resident explained via Instagram at the time. “We are so grateful for the moments we shared together and the entire journey that has unfolded this year, but we ultimately have concluded that we are not compatible as life partners, and it is the most caring choice for both of us to move forward independently. We ask for kindness and privacy as we both navigate this transition. Both of us will forever want the best for one another and ask you to please support us in our decision.”

As Thurston began navigating her new normal post-engagement, she decided to assign various Red songs to her former contestants upon the album release.

Bachelor Nation Couples Who Have Split in 2021

“Maybe it’s just a title, maybe there’s more to it, maybe it’s absolutely nothing,” she explained via Instagram Story in November. “I mean, think about it. 12 songs, 12 guys is a lot. But I’m very excited. I’m enjoying it. No hate intended. Some of Taylor’s songs are messy. Some of them are nothing but love and respect.”

Kicking off her “messy” challenge, the former Bachelorette dedicated “We Are Never Ever Getting Back Together (Taylor’s Version)” to the 31-year-old Canada native.

“Day 1. Blake Moynes,” she wrote in an Instagram Story post at the time, with the song playing in the background. In the succeeding days, Thurston dedicated other songs written by Swift to Andrew Spencer, Aaron Clancy, James Bonsall, Thomas Jacobs, Mike Planeta, Michael Allio, Brendan Quinn and Montgomery, 34.

While eagle-eyed fans thought Thurston’s “I Almost Do” dedication to the 36-year-old Ohio native seemingly hinted that she was open to a potential reconciliation, her Friday note about reaching to a former Bachelorette contestant further added fuel to the speculation. However, Thurston has remained coy about her intentions moving forward and has not name-dropped anyone in particular just yet.