King Charles is hosting his first annual Christmas lunch for the wider royal family as monarch at Buckingham Palace.

This year’s event sees the family brought together in the largest reunion since the Queen’s funeral in September – and the first time the traditional gathering has taken place since 2019, due to the Covid-19 pandemic.

Dozens of royals are expected to attend, including the Prince and Princess of Wales, but notable absentees include Prince Harry and Meghan Markle, and their son Archie and daughter Lilibet, who remain in the US.

The turkey and trimmings lunch at Buckingham Palace has typically taken place annually on the Wednesday before Christmas, shortly before the monarch leaves for Sandringham for the festive season. 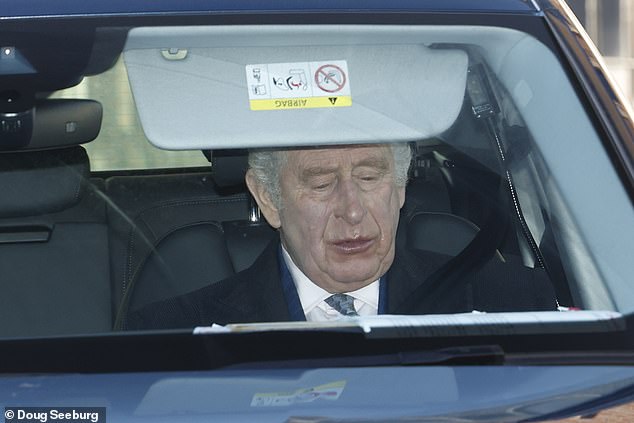 The first to arrive was King Charles himself, who travelled to Buckingham Palace in a car.

He opted for a smart baby blue tie for the occasion, which he paired with a navy blue suit.

Meanwhile the Queen Consort followed shortly afterward, and looked serene as she was driven into Buckingham Palace.

She was wrapped up warm in a padded navy jacket, which she paired with a blue velvet blouse beneath. 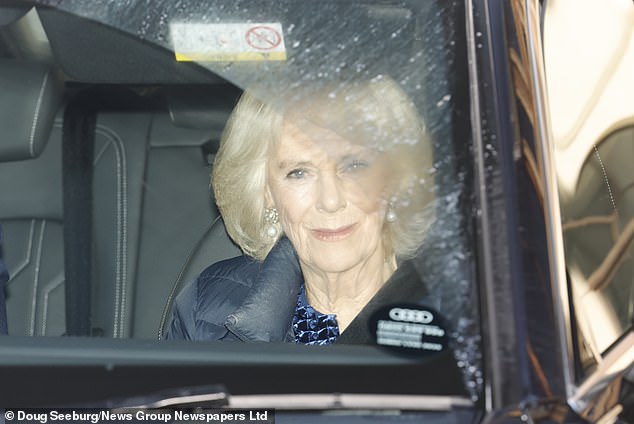 The Queen Consort looked serene as she was driven into Buckingham Palace, wrapping up warm in a padded navy jacket 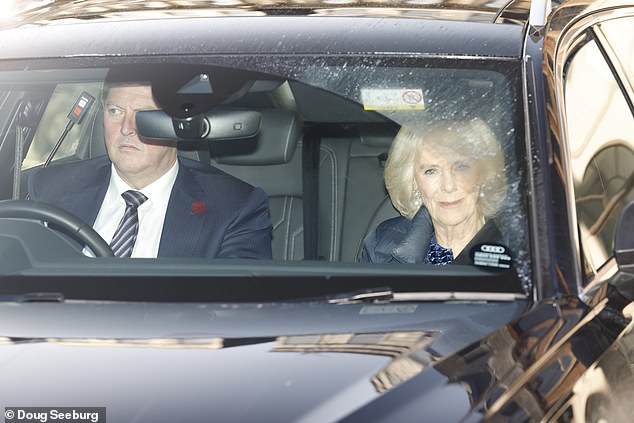 The Queen Consort appeared in high spirits as she wrapped up warm in a padded navy jacket, which she paired with a blue velvet blouse beneath

The tradition is one of the rare times all of the monarch’s extended family meet, and is a chance for the King to celebrate with those who do not receive an invitation to spend Christmas in Norfolk with the senior royals.

The family are seated at round tables, enjoy a Sandringham-bred turkey lunch and pull crackers.

It’s the first time the royals have gathered for the traditional celebration since before the Covid-19 pandemic.

Last year, the late Queen had planned to welcome 50 family members to Windsor Castle where she was then residing, but cancelled due to fears over the Omnicron variant. 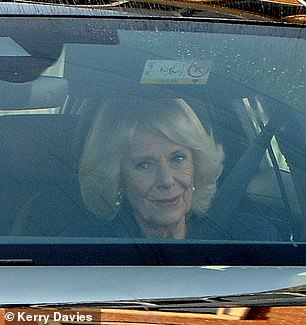 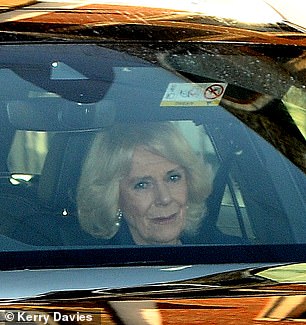 The Queen Consort appeared in high spirits ahead of the festive lunch at Buckingham Palace this afternoon, which is the first of it’s kind in a number of years

The lunch was also called off in December 2020 when London was in lockdown and people were urged not to travel around the country due to Covid.

Last week, a number of senior royals came together for Kate’s Together at Christmas carol service, which took place at Westminster Abbey.

Body language expert Judi said the Royal Family projected ‘bonding and unity’ as they gathered for the carol service after Harry and Meghan’s latest slew of attacks.

Ms James said the princess’s ‘warm smile of pride’ as she watched her children exchange kisses with the monarch ‘show everything we need to know about family unity’. 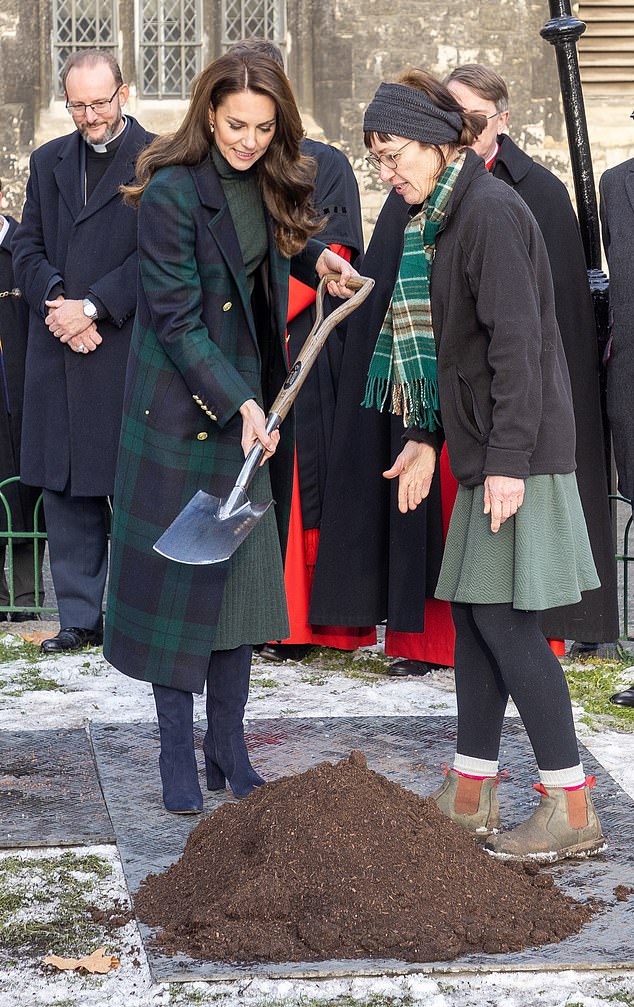 There were audible cheers from members of the public who shouted ‘we love you’ to William and Kate as they stood in the cold to greet the future king and queen outside the Abbey.

Poignantly, William read a passage from the late Queen’s 2012 Christmas message in which Her late Majesty said she was ‘always struck by the spirit of togetherness’ at Christmas.

It was a time, she had added, ‘when we remember that God sent his only son to serve, not to be served’.

Buckingham Palace and Kensington Palace have said they will not comment on Harry and Meghan’s claims – with the King said to be determined never to watch the six-part series.

Today’s gathering comes after it was confirmed that the King, Queen Consort and members of the Royal Family will spend Christmas at Sandringham for the first time in three years.

The gathering at Sandringham will be the first time the Royal Family has spent Christmas at the private royal residence since 2019, and it will be a poignant period following the death of the Queen in September.

Buckingham Palace said in a brief statement: ‘Their Majesties The King and The Queen Consort accompanied by Members of the Royal Family will attend the Morning Service on Christmas Day at Sandringham Church, on Sunday 25th December 2022.’

It is likely Charles and Camilla will be joined by the Prince and Princess of Wales and their children, Princess Royal and her family, the Earl and Countess of Wessex and their children – but it remains to be seen if the disgraced Duke of York will make a public appearance.

Questions also remain over Harry and Meghan, who are said to be frozen out of Charles’s first Christmas dinner at Sandringham as monarch – after their Netflix series launched an unprecedented attack on the Royal Family, accusing the King of ‘lying’ and the Prince of Wales of ‘screaming’ at his brother.

Christmas at Sandringham follows a break, when, due to the Covid pandemic, the late Queen spent the festive period at Windsor Castle two years in a row – the first with the Duke of Edinburgh, separated from her wider family in lockdown.

Royal Christmases feature a morning trip to St Mary Magdalene Church, the greeting of well-wishers, and a family lunch with turkey and all the trimmings.

New book reveals Queen’s stoicism in final months: Intimate portrait tells how she found comfort after Philip’s death watching Line of Duty and how she dealt with revelations about Andrew

Royals rally around Kate: King Charles and Queen Consort will attend Princess of Wales’ carol service on day the second part of Harry and Meghan’s bombshell show is released

I’m sure there will be someone out there for Reggie’: Queen Consort appeals for a home for a ‘pensioner’ pet in special episode of Paul O’Grady: For the Love of Dogs