Lady Louise steps out in style! Sophie Wessex’s daughter, 18, is chic in an all-grey ensemble and sophisticated swept back hairstyle as she joins royals at the Buckingham Palace concert

The Queen’s granddaughter Lady Louise Windsor was snapped looking stylish as she stepped out wearing an all-grey outfit to attend the Platinum Jubilee concert at Buckingham Palace tonight.

Looking smart for the concert, which featured performances from a glittering array of artists including Eurovision star Sam Ryder and Diversity’s Ashley Banjo, the young royal opted for a black and white v-neck dress, topped with a cosy grey overcoat.

Perhaps mindful of the brisk evening weather, she appeared to be clutching a blanket as she took her seat at the venue.

Other royals in attendance at the concert were Kate Middleton, 40, her husband Prince William, 39, and their two eldest children Prince George, eight, and Princess Charlotte, seven. 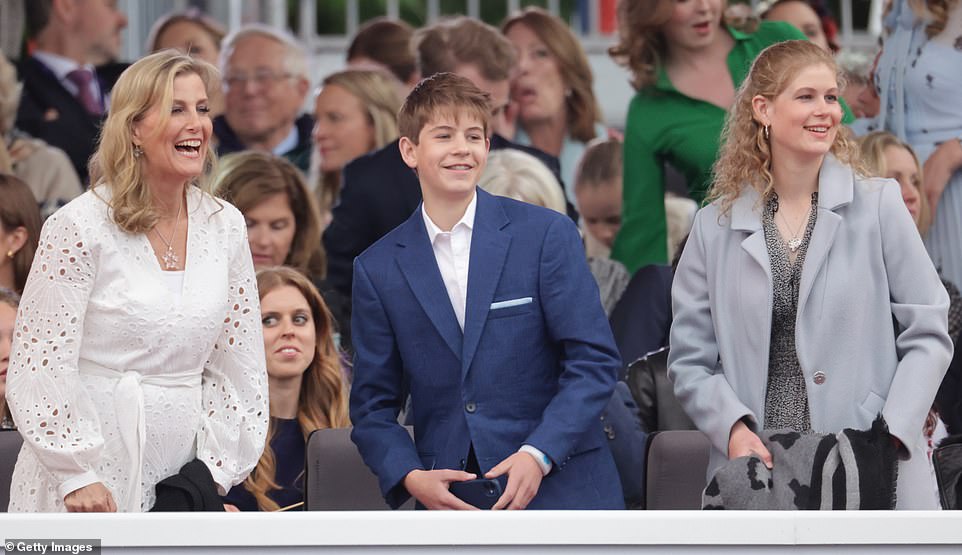 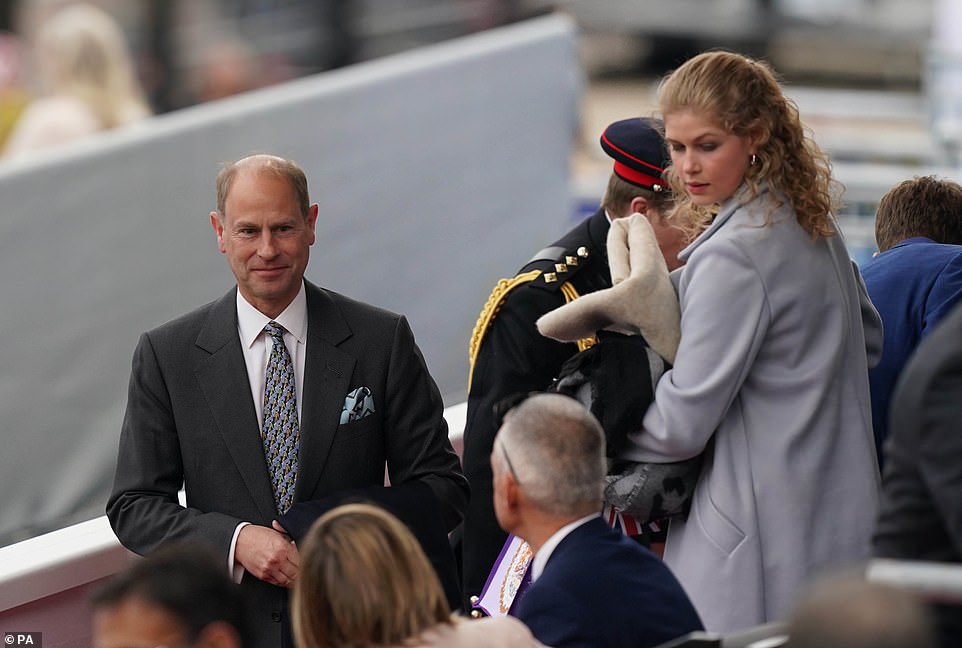 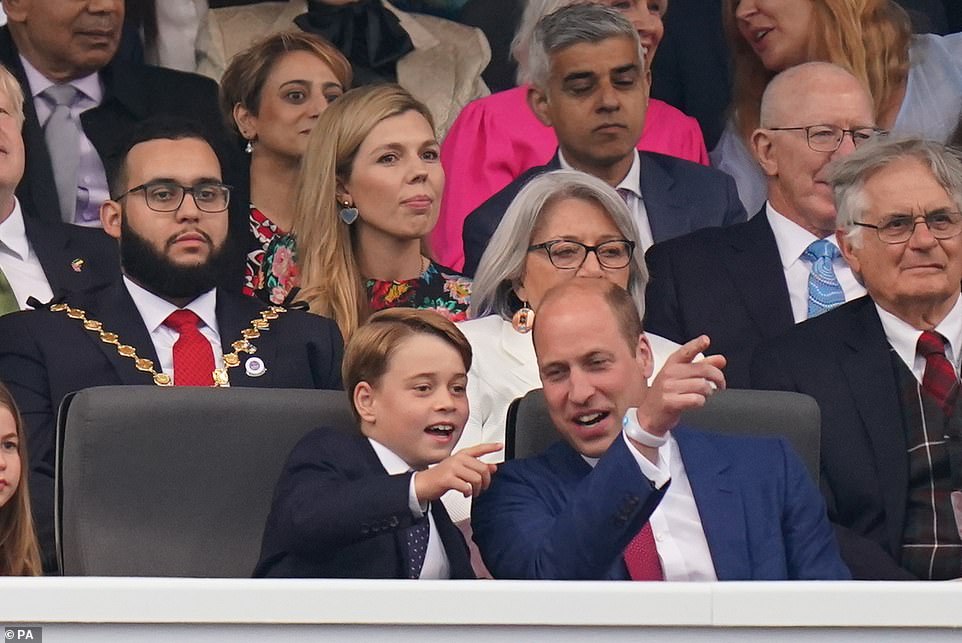 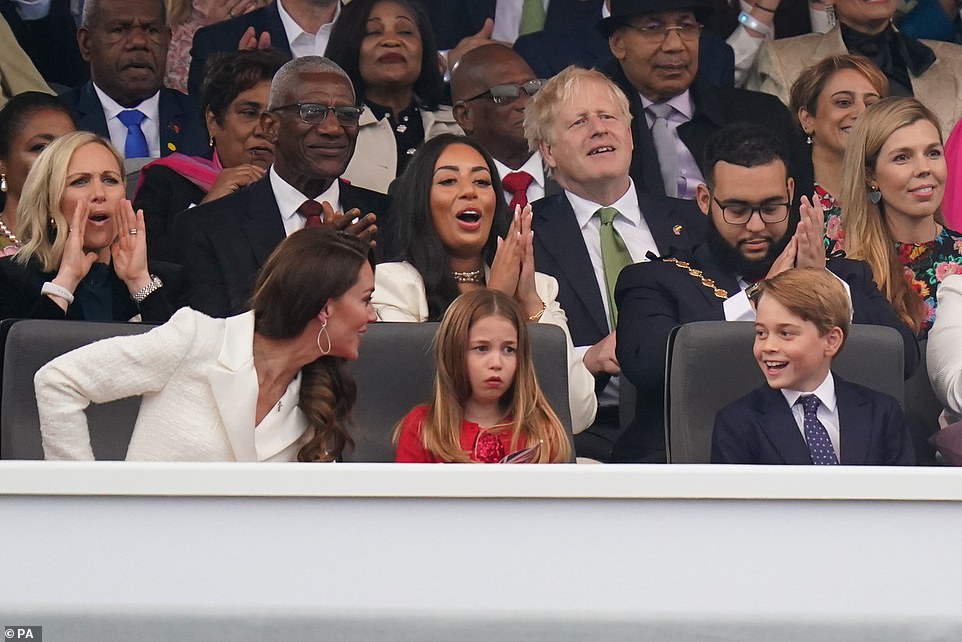 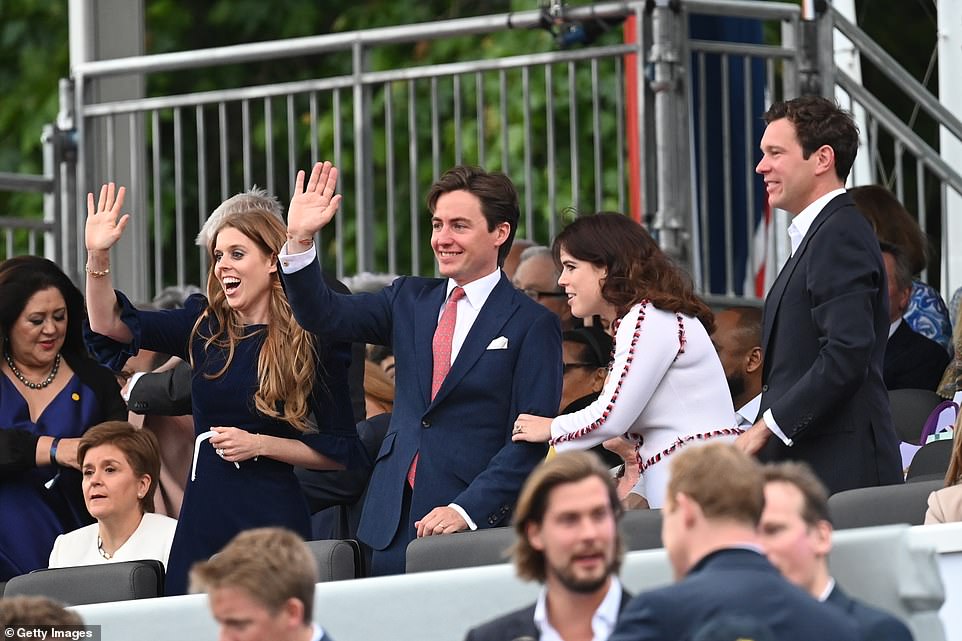 Princess Beatrice, Princess Eugenie and their husbands joined members of the Royal Family at the star-studded concert 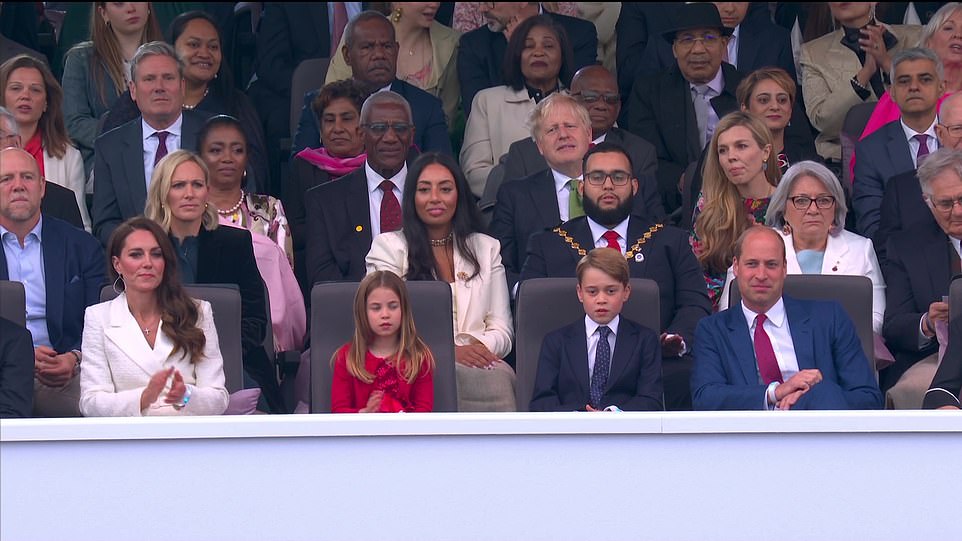 Prince William, 39, and Kate Middleton, 40, brought along their two eldest children as the Royal Family turned out in force for the historic concert in London 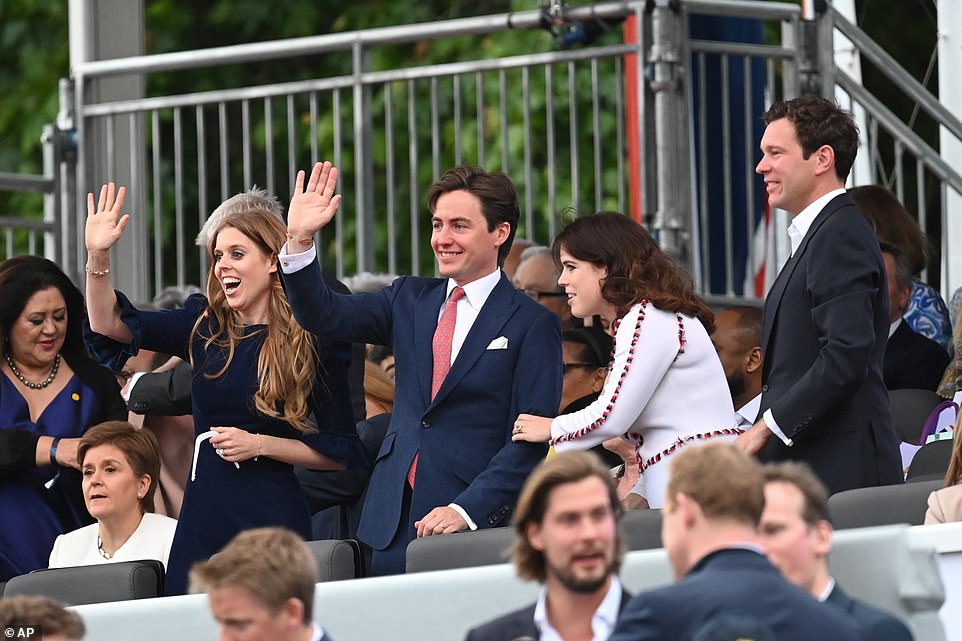 Princesses Beatrice and Eugenie were among the other royals who attended tonight’s concert, alongside their husbands Edoardo Mapelli Mozzi and Jack Brooksbank

They were accompanied by Prince Charles and the Duchess of Cornwall, Zara and Mike Tindall and Princess Eugenie and Princess Beatrice with their husbands.

Tonight’s concert was set to be the highlight of the third day of public events to mark the 96-year-old monarch’s record-breaking Platinum Jubilee with 22,000 people set to attend in person outside Buckingham Palace.

Among the royal attendees at Saturday’s star-studded live Jubilee concert, staged in front of Buckingham Palace, were the Prince of Wales, the Duchess of Cornwall and the Duke and Duchess of Cambridge.

Prince Charles and Prince William also announced they would take centre stage in front of a crowd of 22,000 to pay tribute to the Queen during the star-studded Jubilee concert.

The father and son – both future kings – spoke separately in honour of the monarch towards the end of the BBC’s open-air Party at the Palace show, staged in the front of Buckingham Palace.

Clarence House and Kensington Palace announced both Charles and William would address the crowds at the high profile event, which falls on the third evening of the four-day Jubilee festivities.

But Harry and Meghan, whose daughter Lilibet is celebrating her first birthday, were not among those in the royal box.

A spokesperson for the couple, who stepped down as senior royals in 2020, said they were spending the day privately. 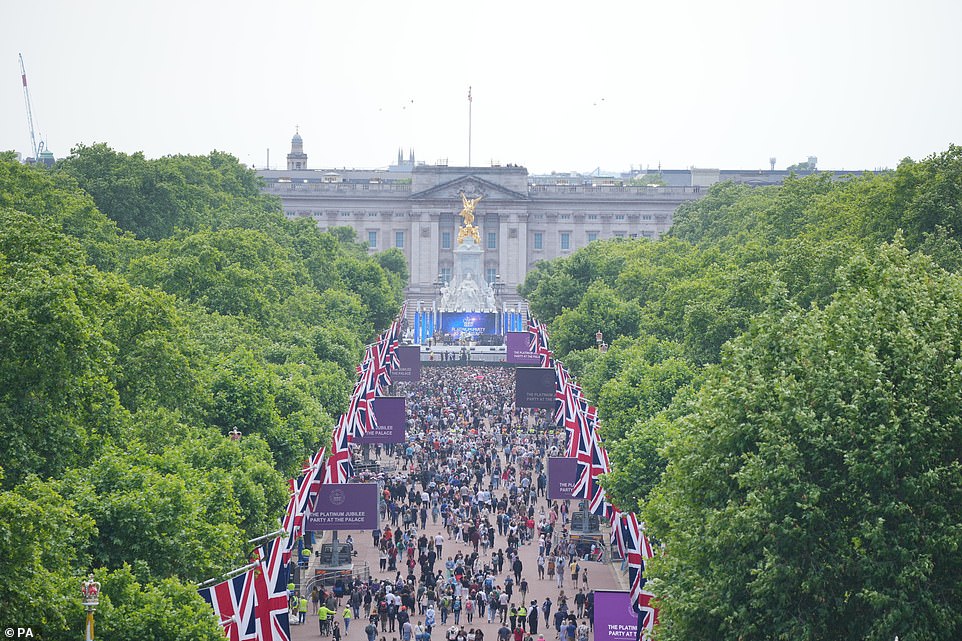 Buzzing atmosphere: Crowd arriving before the start of the Platinum Party at the Palace in the front of Buckingham Palace 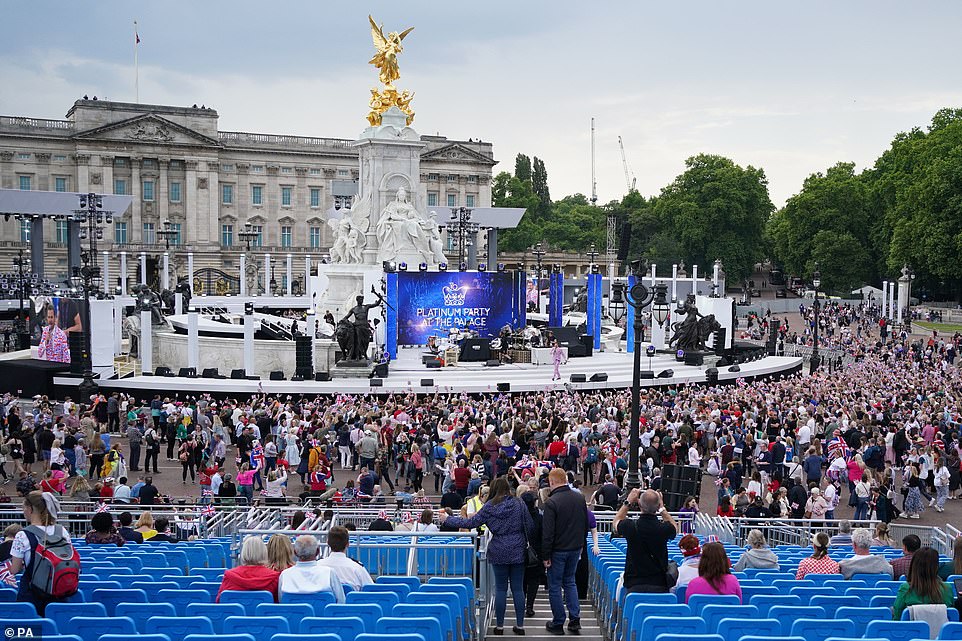 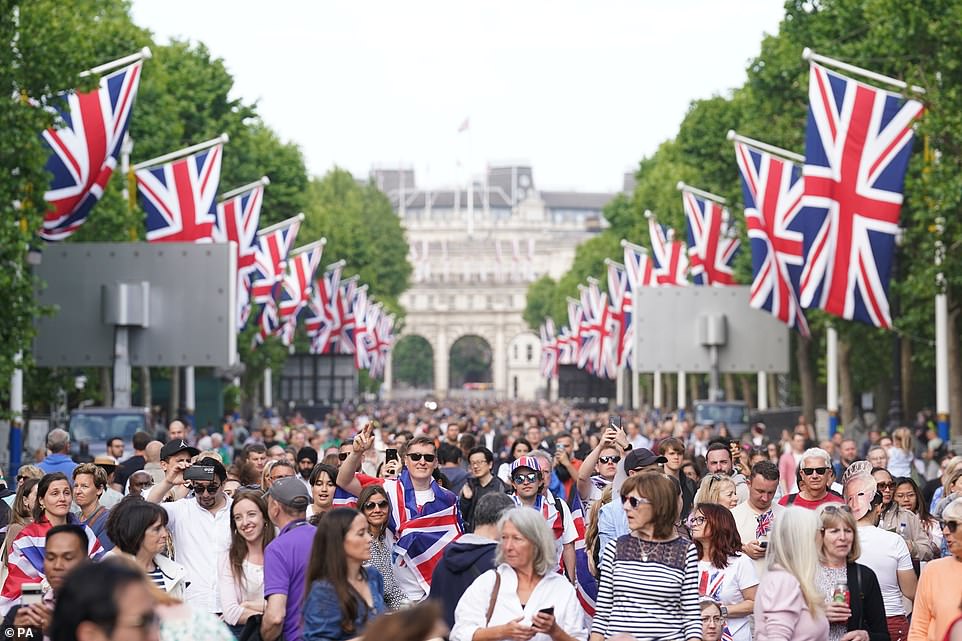 Members of the public on The Mall before the start of the Platinum Party at the Palace in front of Buckingham Palace, London

Ahead of the event, partygoers had described ‘a once-in-a-lifetime opportunity’, ‘an honour’ and ‘a dream come true’ to be celebrating the Queen’s Platinum Jubilee at a Buckingham Palace party.

The line-up: Who is performing at the star-studded Platinum Party at the Palace?

The star-studded line-up for this evening’s Party at the Palace is as follows:

Some 22,000 people marked the historic occasion outside the royal residence beneath overcast skies in central London – but the quintessentially British summertime weather has not dampened spirits.

Crowds had eagerly awaited the Prince of Wales and the Duke of Cambridge, who are due to speak at Party at the Palace before stars including rock band Queen, Diana Ross and George Ezra perform from 8pm.

Aisha Kasim, 37, described being at the event as a ‘once-in-a-lifetime opportunity’.

University learning support worker Ms Kasim travelled to the palace concert with her mother Mae Kasim, a retired teacher, from their home in Aberdeen.

Aisha, who was wearing a Scottish flag, told the PA news agency: ‘I think it’s a once in a lifetime opportunity and I think it’s the sort of thing that we probably won’t see again any time soon.

‘(The Queen) is our longest-serving monarch, she’s done amazing all these years, so it’s just great to come along for the party and to make the journey from Scotland.

‘We flew all the way from the other side of the country for this so we’re happy to be here.’

‘I’m actually from Nigeria as well, I’m Nigerian-Scottish, and Nigeria was an ex British colony, so I’ve grown up my while life with that,’ she added.

Lucy Morris, 39, and her son Lucas Wainwright, 14, travelled from Durham in north-east England for the concert.

Both were wearing Union Jack wigs and face paint, and the teenager described being at the event as ‘the best thing of my life’.

Lucas, who had also swapped his prosthetic leg to a ‘Jubilee-style leg’ patterned with Union Jacks for the occasion, told the PA news agency: ‘It’s an honour to be here. I’m looking forward to seeing the royals come out.

‘They’re connected to God, they’re here to lead us as a country, as a nation. I think that’s very important.’

Lincolnshire couple Mandy and Malcolm Tipple were among those wearing Union Jack flags and matching face paint for the occasion. Mr Tipple, 65, told PA: ‘It’s fantastic. I’m ex-military and I’ve followed the Queen all my life.’

Mrs Tipple, 59, added: ‘I’m just proud to be British, so to be here for this is a dream come true.’ Meanwhile, millions more are expected to watch the concert from their homes via BBC One.

Queen, whose guitarist Brian May performed on Buckingham Palace roof for the last Party at the Palace in 2002, will be joined by singer Adam Lambert, while Eurovision star Sam Ryder will also take to the stage. 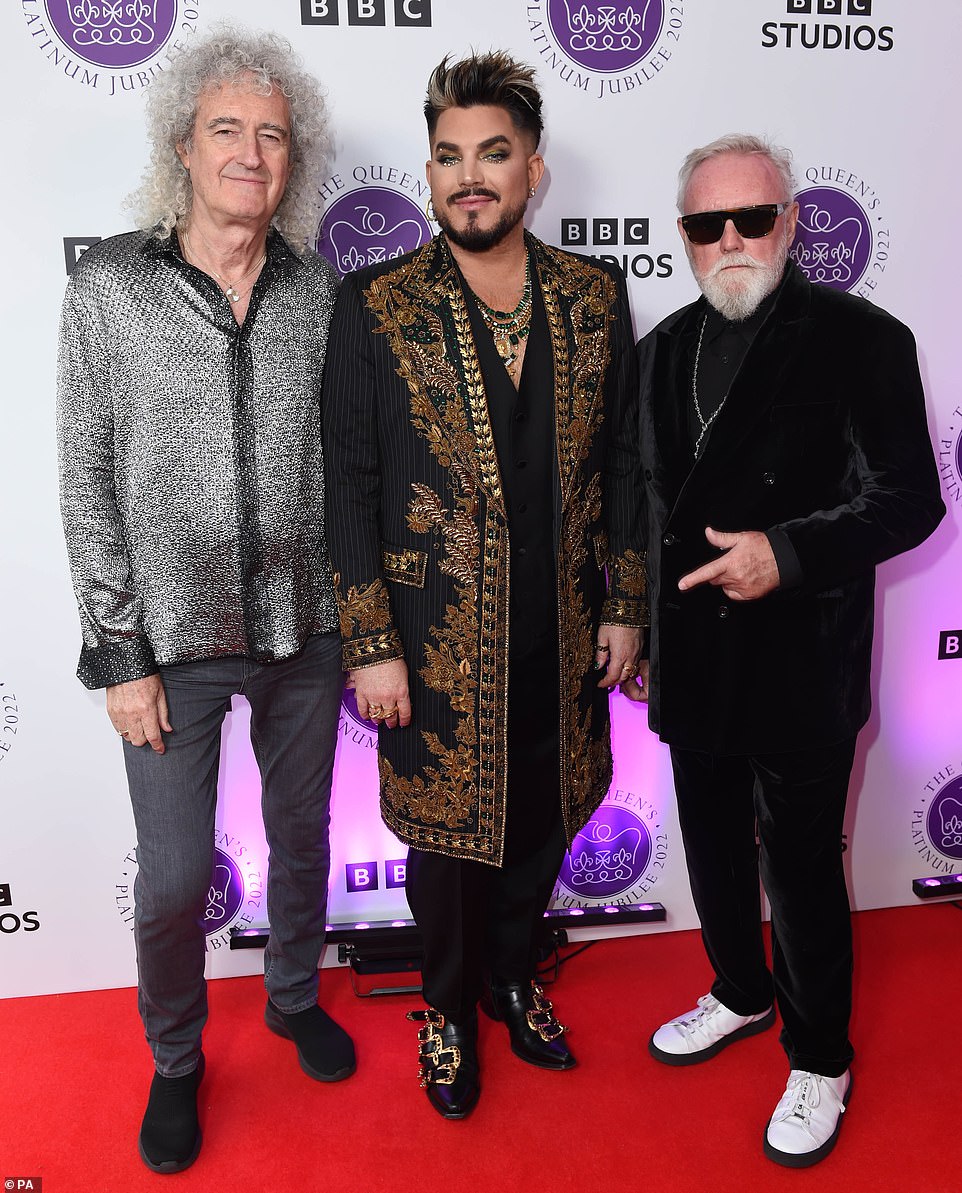 Brian May, Adam Lambert and Roger Taylor of Queen attend the BBC’s Platinum Party at the Palace this evening 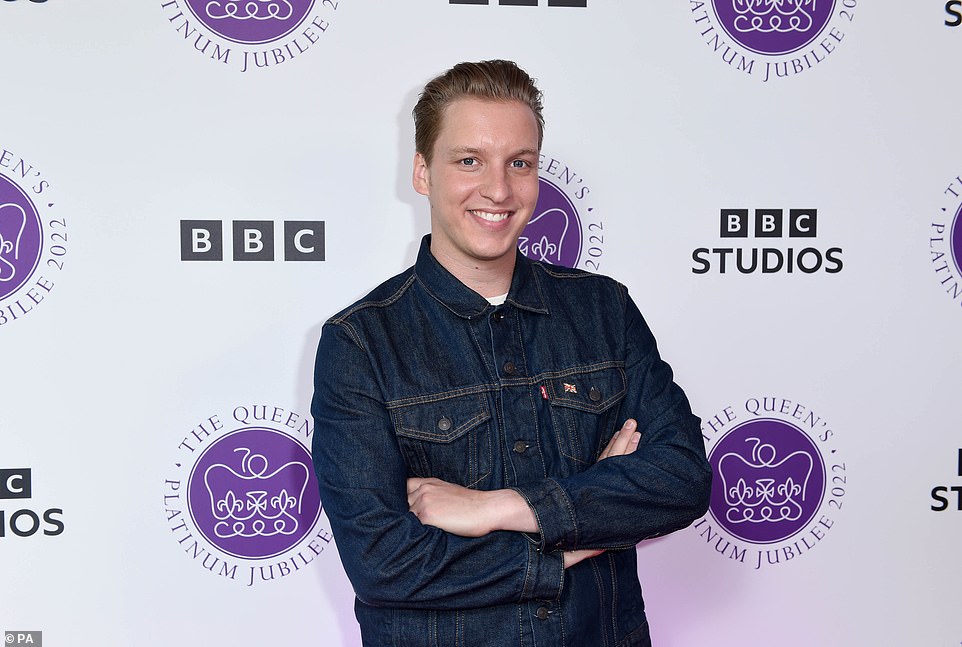 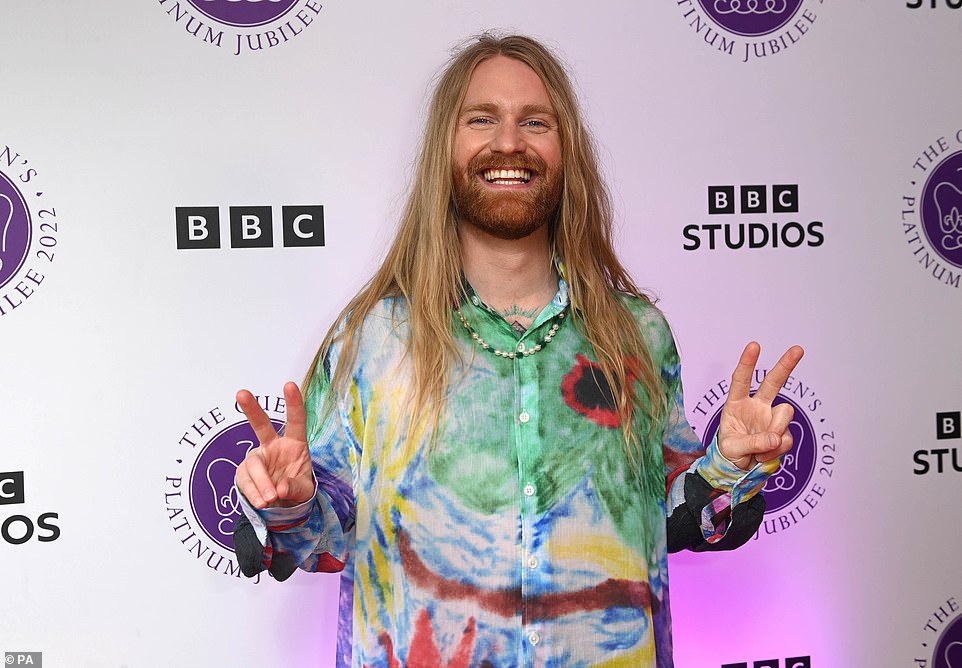