A vet revealed her female pugs have struck up a lesbian relationship.

British owner Christine King explained her pets, Pugly and Nelly, have come to ‘love’ each other and are incredibly close.

Speaking on This Morning, the vet explained the dogs ‘lick each other’s ears’ and that dominant Pugly even ‘mounts’ Nelly.

Christine appeared on the show ahead of tonight’s Channel 4 documentary My Gay Dog and Other Animals, which examines homosexual relationships between animals. 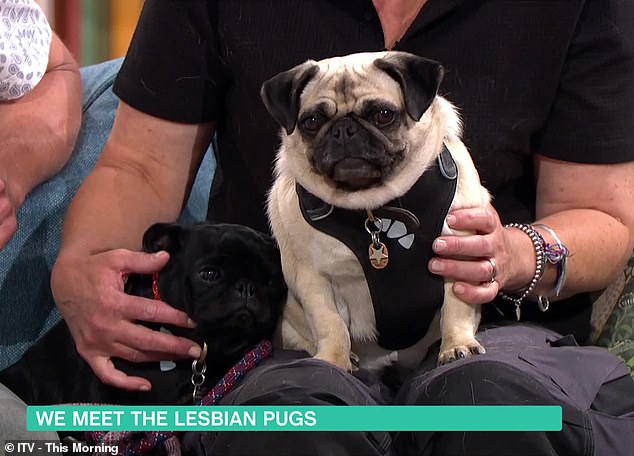 British expert Christine King explained her female pugs, Pugly and Nelly, pictured, have come to ‘love’ each other and are incredibly close during an appearance on This Morning today 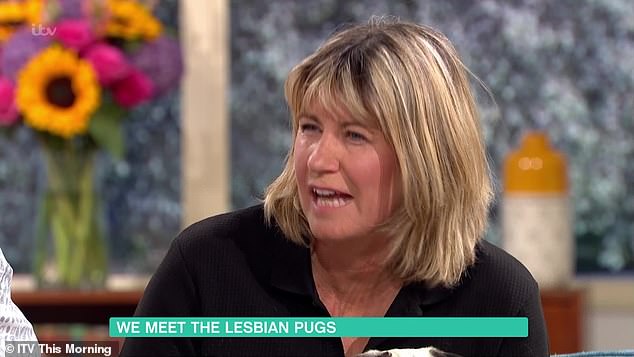 Christine, pictured appeared on the show ahead of tonight’s Channel 4 documentary My Gay Dog and Other Animals, which examines homosexual relationships between animals

Speaking to Phillip Schofield and Holly Willoughby, Christine said it wasn’t love at first sight for Pugly and Nelly and that their ‘initial relationship was poor’.

Insisting that their bond is more than just the two of them getting on, Christine told the hosts: ‘We see on average 80 dogs a day in our facility so you get to see the behaviours in dogs. But these two have bonded.’

Describing that Pugly and Nelly have to see each other first thing in the morning, Christine told the hosts about the pooches’ routine.

‘They lick each other’s ears and they sleep together. It progresses when they get involved in extra activities.’

Wanting to get more information about their intimate activities, Phillip tried to get Christine to share more details.

But she quickly changed the subject to explain that Pugly is the one who is the driving force in the relationship. 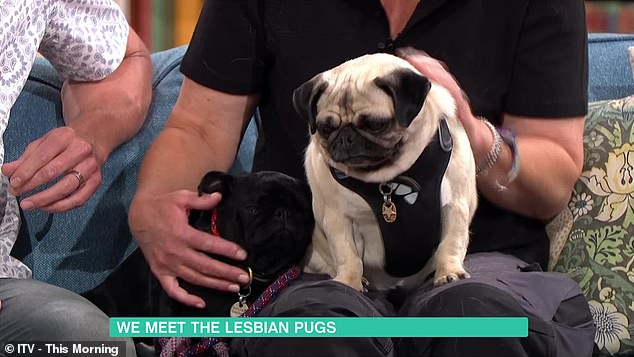 Vet  Christine explained the dogs ‘lick each other’s ears’ and that dominant Pugly even ‘mounts’ Nelly. The pugs, pictured together on This Morning, also sleep together

‘Pugly is the driving force and mounts Nelly,’ Christine shared before Phillip suggested that Nelly is bisexual and Pugly could just be a friend with benefits.

Whilst the two pugs are very happy with each other at the moment, Christine explained that she is concerned about what the future holds for them if one were to die.

‘They do have a love. The only thing that worries me about all of this is that if we lost one, one of them would pine. They would suffer. They really love each other.’

This Morning’s resident vet Dr Simon Miller also weighed in on the debate about whether animals could be gay. 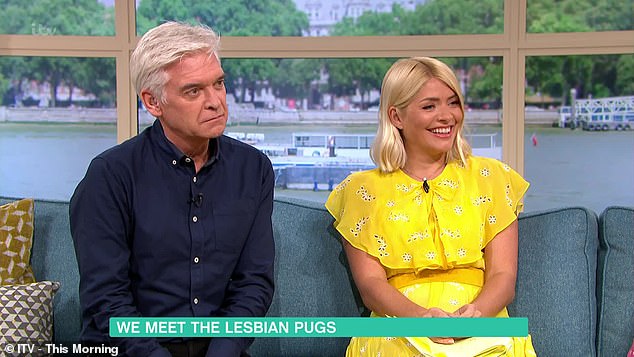 Phillip and Holly couldn’t help but giggle as Christine spoke about Nelly and Pugly’s sexual activities. Phillip suggested one of the dogs might be ‘bisexual’

After explaining that gay relationships have been reported across thousands of species across the world, Simon insisted that homosexual animals are ‘exhibiting natural behaviour.’

During the segment, Simon referred to a number of animals who feature in the Channel 4 documentary including two flamingos at Slimbridge Wetland Centre in Gloucestershire who are a monogamous pairing.

As they want to be parents, Carlos and Fernando, who have been in a 14 year relationship, borrow a nest and bring up the chicks.

Wanting everyone to celebrate gay animals, Simon declared: ‘It is a natural behaviour. It’s not nurture. You can’t learn or be taught to be gay. You are what are.

‘We should learn a lot from animals. If it’s happening naturally then we should just celebrate it.’

The documentary features Professor Volker Sommer, an Evolutionary Anthropologist at University College London, saying: ‘In most cases animals will have sex with members of their own sex and with members of the opposite sex. It’s a wonderful world.’

My Gay Dog and Other Animals airs on Channel 4 tonight at 9pm.