By Nick Bonyhady and Emma Koehn

Colin Moxey did not sign up to be a bouncer. But when his eponymous hair salon in Melbourne’s Chapel Street shopping precinct reopens to its now-shaggy waitlist of 300 clients, Moxey is afraid the government will make him work out his own COVID-19 vaccine policy for clients, instead of setting clear rules for all businesses.

“The last thing I want to do is be like a doorman at a nightclub – I don’t want to choose [which patrons can enter]. And if they can’t get vaccinated that puts you in a real predicament,” he says. “If there is an official notice from the government on my front door, it takes the onus off me.”

But in Australia and overseas, vaccine mandates and passports have been shunted off into the future, raised but with few details and little legal clarity or the subject of bitter divisions that have upended traditional political fault lines, depending on the state. 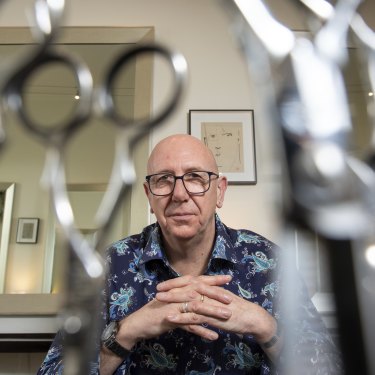 “The last thing I want to do is be like a doorman at a nightclub,” says salon owner Colin Moxey.Credit:Penny Stephens

The concept behind vaccine passports is simple: people link their vaccine status to their state’s QR code app and check in at venues to verify that they are vaccinated and therefore allowed to be there. Everything else about the idea is more complex.

With vaccination rates rising fast but more than 10 per cent of the adult population, or about 2.2 million people, still hesitant, according to The Sydney Morning Herald and The Age’s Resolve Political Monitor, the debate is only becoming more intense.

If states reopen venues like pubs and restaurants to the vaccinated once 70 or 80 per cent of the eligible population is jabbed, as NSW and Victoria have suggested, the number of people missing out on freedoms will be double or triple that.

One of the medical experts who helped guide Australia through the early stages of the pandemic, Dr Nick Coatsworth, foresees people becoming furious at each other over vaccinations if the situation isn’t handled properly.

“We’re seeing sufficient people start to question the lack of clarity at 80 per cent that unless we give more clarity and hope and a psychological runway, we’re going to start to lose more people in terms of adherence to restrictions,” Coatsworth says.

But if all those freedoms are made conditional on vaccination targets that are set too high, then Coatsworth, who is as far as anyone can be from being an anti-vaxxer, fears intense shaming of those who can’t or won’t get the jab. “I don’t want people who haven’t been vaccinated actually vilified for that choice.”

If targets are set too low, the prospects are also dire, as soaring deaths in the United States, largely among the unvaccinated, show.

At one level, the choice is about how great a public health risk premiers and the public are willing to accept.

But it is also a moral choice about whether society should decide that people are competent to make their own decisions about vaccination, even when the consequence of declining a jab can be a painful illness and a lonely death.

That dimension seems to have sparked the political divisions.

Under that scheme, when the state hits a 70 per cent double-dose vaccination rate, only the inoculated will be allowed at church services, gyms, sporting matches, pubs and restaurants. 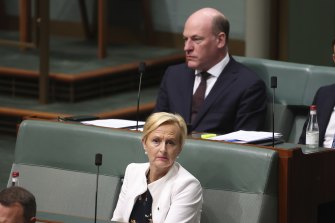 “A lot [of coronavirus restrictions] do sit uncomfortably with anyone liberal by nature, but there’s such an essential need for these things to be in place for a health perspective,” Zimmerman says. He believes the passport plan will encourage and reward vaccine uptake and last only as long as necessary before being unwound if the virus abates.

The timing question has caused ructions inside the NSW government.

Deputy Premier John Barilaro suggested on Monday the passports could be valid for only a few weeks, whereas Berejiklian has signalled they could go longer.

“Don’t assume that at 80 per cent double-dose vaccination that unvaccinated people are going to have all those freedoms. I want to make that point very clear,” Berejiklian said this week.

Some of her Liberal colleagues disagree. Conservative Tasmanian senator Eric Abetz is concerned about creating a second class of citizen. “In a liberal democracy, you’re allowed to make unwise decisions or decisions which are not mainstream, and being allowed to move around in your country is, I think, a basic right,” he says.

Dr Katie Allen, a Victorian Liberal MP who is among the most progressive in her party, also has reservations. She is afraid that mandates — except for key industries such as aged care — and passports will harden the hesitant into outright anti-vaxxers.

“The word passport, particularly domestic vaccine passports, is something that in my electorate has made people extremely angry,” she says. People should be offered a chance to have regular testing instead if they want access to mass gatherings, Allen says.

That perspective has created an unusual political dynamic because NSW Labor leader Chris Minns has been a determined backer of mandates in high-risk industries and passports more broadly.

Victorian Premier Daniel Andrews has also sketched out a reopening plan for when his state hits the 70 per cent double-dose threshold that seems similar to Berejiklian’s.

Then there are the largely COVID-19-free jurisdictions of Queensland, Western Australia and Tasmania, which are in a different phase altogether because every one of their residents has those freedoms at present.

It will not last forever though, and figures from the non-partisan Melbourne Institute show the problem could become more acute when those states do open up because vaccine hesitancy is higher at 22.1 per cent in WA and 21.6 per cent in Queensland compared to less than 15 per cent in Victoria and NSW.

From Moxey the salon owner to Andrew McKellar, chief executive of the country’s largest business lobby, the Australian Chamber of Commerce and Industry, employers are getting fed up at the divergent state stances and lack of detail about how reopening rules will be enforced.

He wants nationally consistent rules enforced by government authorities, not businesses, but Canberra, which is making the technology to integrate vaccine status with state QR code apps, has largely left it to the states to decide how it will be used.

Prime Minister Scott Morrison has instead said businesses can decide on their own rules and emphasised the government does not support broad mandates. He will not use the term “vaccine passports” either.

“Any venue, any venue, any pub, any cafe, any restaurant, any shop can, has every right under Australia’s property laws to be able to deny entry to people who are unvaccinated,” Morrison said on Sky in early September.

Asked whether that meant the government was rolling out vaccine passports, he demurred, saying, “that’s not how I refer to them”.

Legally, the Prime Minister is correct.

Discrimination law does not directly protect the unvaccinated, but if someone who can’t be vaccinated due to a disability for example was denied entry to a venue, that could raise problems.

Privacy law is unlikely to be an issue either as long as firms stick to government apps because the government keeps the vaccine data secure through the QR code system, rather than individual businesses.

Likewise, most legal experts have said companies employing front-line workers who have to be physically present at work are likely to be allowed to require vaccinations under laws that let firms give staff “lawful and reasonable” directions.

So far, the employers that have announced mandatory vaccinations have almost all been in that category – from taxi company 13Cabs, where drivers and customers sit in close proximity, to airline Virgin Australia and stevedores DP World, where workers might come into contact with people and goods from overseas. 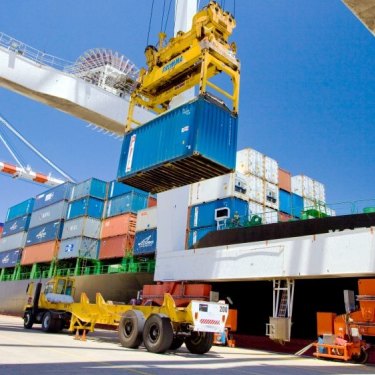 DP World stevedores, which operates at ports around the country, has some of the workers most likely to come into contact with people and goods from overseas.Credit:Glenn Hunt

But the picture is much more complicated where staff are in an office. Only Qantas has said it will make its office staff get vaccinated, setting a deadline of March 31.

That is because the Fair Work Ombudsman, which is the federal workplace watchdog, has cautioned that staff who work from home are least likely to be subject to legal jab mandates. They have the least contact with others who are likely to be sick and the least chance of passing it on.

That dovetails with an increasing trend of companies allowing more staff to work from home that is set to outlast the pandemic.

A July survey conducted by The Age and The Sydney Morning Herald of 50 of the nation’s largest companies, which collectively employ more than 1 million people, found 42 had created permanent hybrid working arrangements for their office staff.

Should the political will for vaccination mandates and passports hold, that could make for a hugely different life experience for the unvaccinated versus the jabbed. Only those with vaccinations at some major companies such as Google are likely to be allowed into the office, to say nothing of other pursuits from church to sport.

Coatsworth supports the plans, up to a point. For people in genuinely high-risk areas such as healthcare, he says mandates are a necessity. Being unvaccinated is “equivalent to not wearing a hard hat at a construction site and we shouldn’t allow it”, he says.

The argument that it’s only about individual liberty doesn’t hold water, Coatsworth says, because the best studies show vaccines reduce transmission to others. 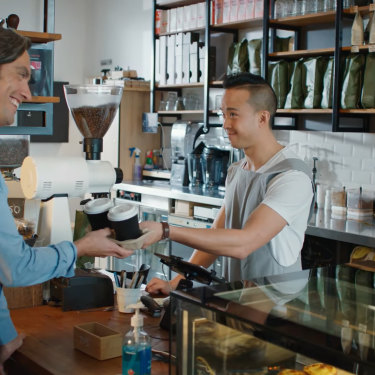 Former deputy chief medical office Nick Coatsworth, left, has been one of the faces of the government’s campaign to get Australians vaccinated and stay safe from the coronavirus.

But he argues that the evidence is not yet in on other industries and feels it is too harsh to force unvaccinated people to go without things they might see as essential to live, such as religious services.

“Passports should be used in a light touch way to encourage people to be vaccinated, so you love the footy or the New Year’s Day Test, if you want to be there you need to be vaccinated,” he says.

“If you miss out on it, it’s not going to substantially affect your lifestyle but for some, it’ll be the thing to get them to be vaccinated.”

Abroad, the road map is uncertain. The United Kingdom said it would require proof of vaccinations to attend nightclubs but then backflipped, with Health Secretary Sajid Javid saying he never liked the idea but it had been worth exploring.

In the US, President Joe Biden introduced a vaccination mandate for about 100 million workers to a chorus of fury from Republican governors, including one who said he would fight it to the “gates of hell”.

But when put to the test in California, a majority Democrat state, mandates won an overwhelming endorsement at a gubernatorial recall election widely seen as a referendum on vaccination.

Anna Field, who runs The Beauty Room in the inner-east Sydney suburb of Paddington, just wants to know how she can reopen her shop safely. She is worried about what she will do if a client only wants to see vaccinated staff or won’t reveal their vaccination status when booking over the phone or online.

“Again, all the pressure is on us,” Field says.

09/19/2021 Lifestyle Comments Off on Liberty from lockdowns or a two-speed society?
Recent Posts