Meghan Markle has worn a number of pieces of jewellery from Princess Diana’s private collection, which she left to her sons on her death.

While Meghan notably is get to wear any jewels from the royal collection, she has enjoyed exploring Diana’s personal jewels.

What pieces of Princess Diana’s jewellery does Meghan Markle have and what is it worth?

Meghan wore this ring with a stunning Stella McCartney dress for her wedding reception with Prince Harry.

Ailsa told Express.co.uk: “Made by Asprey in the late 1990s for Princess Diana, it was designed to match a pearl and aquamarine cuff she already owned and favoured.

“Diana wore the ring to public occasions, such as a trip to Sydney in 1996 and an auction preview of her dresses at Christie’s in 1997.

“Meghan most notably wore the stunning cocktail ring on her wedding night to Prince Harry, however she also paired the ring with a white evening gown for a state dinner in Tonga.

“The iconic ring has previously been estimated to have cost Diana £75,000, however the popularity of aquamarines has rocketed since Meghan Markle wore the ring on her wedding night and it would therefore be possible for the ring to reach £500,000 at auction with the provenance of being worn by both women.”

Gold cuff bracelet with set with cabochon sapphires and diamonds

Meghan has worn this dainty bracelet on a few occasions, first wearing the piece on her and Harry’s Australia tour, straight after their wedding.

“While perhaps a slightly more understated piece from Diana’s collection, the bracelet was one of her favourites to pair with more casual outfits,” Ailsha said.

“Meghan however has worn the bracelet numerous times with anything from fully sequinned gowns to day dresses, making it one of her staple accessories.

“The yellow gold cuff bracelet features two large Sapphire cabochons and diamond detailing; again with the provenance of its popularity with both women this bracelet could easily reach £10,000 at auction.” 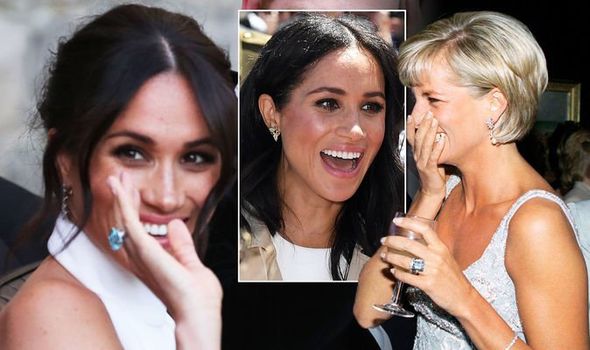 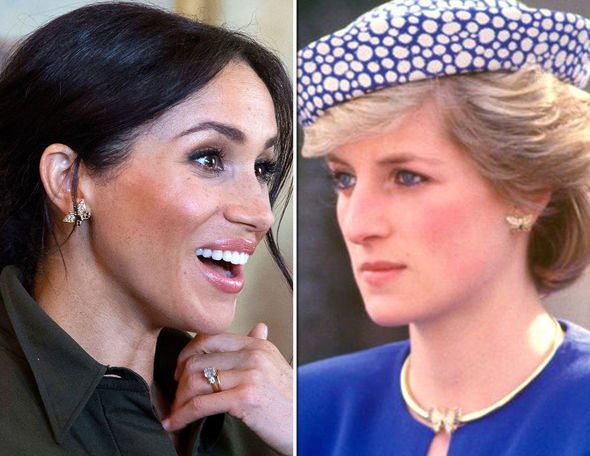 Meghan also opted to wear these earrings for the first time in Australia. Ailsa said: “Princess Diana first wore the delicate yellow gold earrings, set with diamonds and blue sapphires, on a Royal Visit to Canada with Price Charles in 1986.

“Like the Aquamarine ring, the earrings are part of a suite including a necklace, however Meghan has not been seen wearing them together.

“Instead she has been seen wearing the butterfly earrings with the gold Sapphire cabochon bracelet also belonging to Princess Diana.

“Meghan wore the earrings on a visit to Sydney shortly after announcing her pregnancy. If the suite was sold together it could reach £15,000 at auction.” 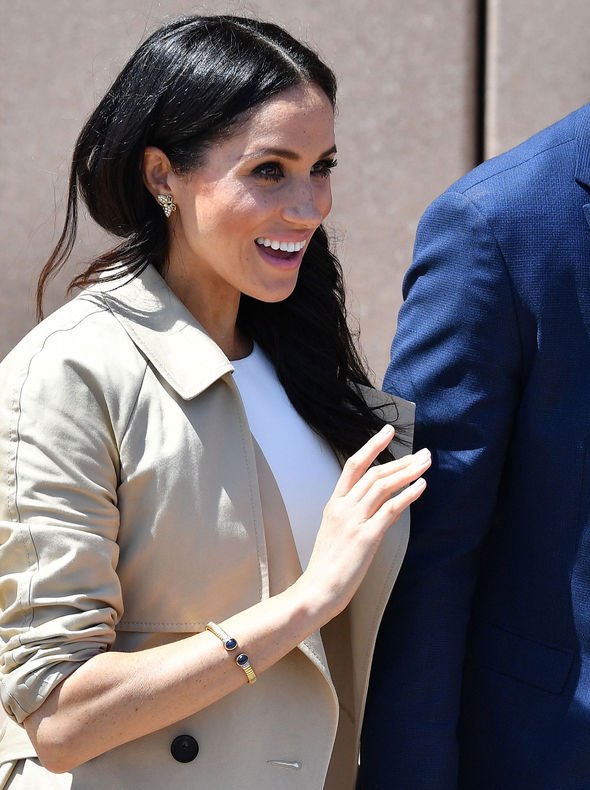 All together these royal gems could sell for up to £525,000, according to the experts.

Meghan and Kate are not the only royal women who wear stunning heirloom jewels.

Lady Gabriella Windsor wore this royal tiara worth £3 million for her wedding.

It was predicted that the royal would wear either the Kent City of London Fringe Tiara or the Kent Pearl Festoon Tiara, due to their links to her family.