It’s safe to say that Wendy Williams’ first date with Mike Esterman was a success!

While chatting with “Access Daily” on Tuesday, Esterman shared details about his recent date with Williams and revealed he’s open to going out with her again. 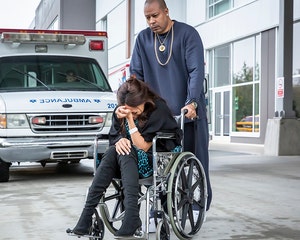 6 Most Surprising and Awkward Moments from Wendy Williams: The Movie

“It’s all new territory,” said Esterman, who was introduced to Williams on an episode of “The Wendy Williams Show” last month. “Getting to know her, she’s very interesting. She showed me her place, on a very professional level. I’m nothing but a gentlemen — there was no sex. It was such a great time.”

Esterman, a general contractor, split their first date into a two-day event, which included a dinner at Tao. While he noted that he generally moves at a “slower pace,” unlike Williams, Esterman revealed there was a “spark” with the talk show host after the first date.

“I gave her a nice gentleman kiss at the end of the night,” he told “Access” hosts Kit Hoover and Mario Lopez, who is close friends with Esterman.

Lopez then showed a clip of Williams’ review of the date.

“I really, really like Mike,” she said on a recent episode of her show. “We had a like a two-hour dinner…We are going to see each other very soon.”

Williams posted a photo from her date with Esterman on Instagram last week.

“Mike & I are having fun!! I’m glad he’s a REAL gentleman,” she captioned a sweet image of herself nuzzling up to Esterman in the back of a car.

Last month, Esterman, 55, beat out two other finalists while competing for a date with Williams, 56, on a “Date Wendy” segment on the February 26 episode of “The Wendy Williams Show.”

“We’re age appropriate,” Williams said after she chose Esterman. “And he’s got jokes!”

03/10/2021 Lifestyle Comments Off on Mike Esterman Details Date with Wendy Williams, Says He Wants to See Her Again
Recent Posts