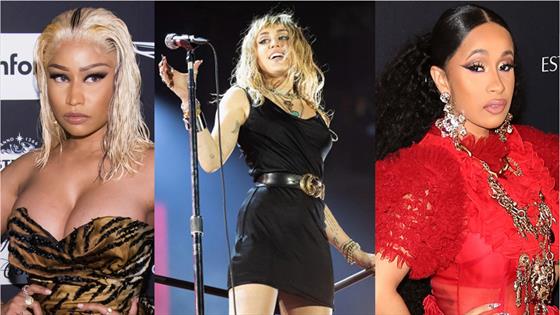 After making headlines this weekend for her performance of “Cattitude,” the 26-year-old singer spoke with Capital Breakfast with Roman Kemp and made it clear she wasn’t shading either artist.

While some fans assumed Miley was picking sides in Cardi and Nicki’s feud, which made headlines after their infamous Fashion Week fight—the “Wrecking Ball” star made it clear this was not the case. She also insisted she had nothing but love for Selena Gomez, Demi Lovato and Ariana Grande.

“I don’t think there is beef now anymore,” she said when asked about the Cardi and Nicki drama. “Actually, one of my songs says ‘You want to know if we’re really beefin’? There’s no beef. I’m a vegan.’ I think you’re allowed to enjoy two artists that fill a similar lane. I just always grew up collaborating with Selena and Demi, and there was never competition. That’s why Ariana is one of my best friends. When you are authentically yourself, no one can be you. So, you’re never worried about someone stealing your place because it can’t be taken because you’re the only one. I think what they do is so different from each other. That’s why they both get a crown. They don’t have to share. They don’t have to break it in half. There’s no reason to fight over it. They’re both queens. And anytime you want to feel powerful and strong, that’s my go-to, Cardi and Nicki.”

As fans will recall, Nicki and Miley had their own tiff at the 2015 MTV VMAs. The “Anaconda” artist called out the former Disney star after Miley weighed in on Nicki seemingly shading Taylor Swift over a VMA nomination during an interview with The New York Times.

“Back to this bitch who had a lot to say about me the other day in the press. Miley what’s good?” Nicki said at the time.

However, the two have appeared to settle any beef.

Nothing but good vibes over here!