Depending who you ask, the happy-go-lucky redhead is either a quintessentially Aussie larrikin or Australia’s answer to Charlie Brown – or both.

Either way, the comic started by Jimmy Bancks in 1921, is one of the longest-running comic strips in the world. As well as its home in The Sun-Herald, it is translated into Spanish and French and syndicated globally, including Thailand, India, France and North and South America, as well as appearing on Instagram, Twitter and Tumblr. 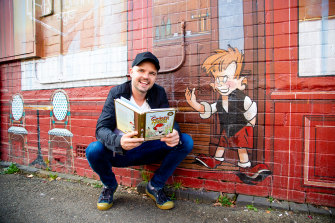 Tristan Bancks, the great-great-nephew of Jimmy Bancks, has written short stories for a book celebrating the centenary of Ginger Meggs.Credit:Edwina Pickles

Comic artist Jason Chatfield is the fifth artist to draw Ginger Meggs – he started 14 years ago at the age of 23 and as far as he’s concerned, it’s a job for life. Copyright is held by Bancks’ family, who choose the cartoonist.

“Every cartoonist who’s done Ginger Meggs has done it until the day he died and I intend to do the same,” Chatfield said.

The comic first appeared as Us Fellers in The Sunday Sun, a predecessor of The Sun-Herald, and the character was called Ginger Smith. However, he – and the strip – quickly became Ginger Meggs.

Each artist has brought his own stamp to the Ginger Meggs universe. For years after Bancks died, Ginger Meggs maintained a 1950s sensibility, but he was made more contemporary in the 1980s and 1990s and again under Chatfield’s reign.

Changes are made gradually but the Ginger Meggs of 2021 has a mobile phone and speaks like a modern Australian kid, rather than using catchphrases like “ripper!” and “you beaut!”

Yet Australian Cartoonists Association president Cathy Wilcox said the strip still harks back to an earlier era when kids were free to roam and is distinctively Australian.

“There’s something to fight for in terms of saving a character that is Australian as opposed to the sort of the worldly, streetsmart American archetype that we are broadly exposed to in Pixar movies or in The Simpsons,” Wilcox said. “He’s never morally reprehensible, he’s only ever a bit naughty and he’s relatable in that way.” 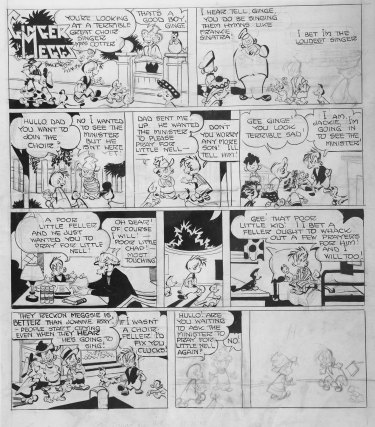 Jules Faber, the illustrator of Anh Do’s Weirdo series and the immediate past president of the Australian Cartoonists Association, said Chatfield had worked to make the strip more reflective of contemporary Australia.

Chatfield says he tries to keep specific news events out of the strip but ensure there is a historical context – he sees the comics page as a “respite” from the news cycle while still being reflective of the world. There were comics last year where characters were wearing masks in a nod to the pandemic, or where Ginger Meggs and his mate were fishing in burnt-out bushland; last week there was a special Anzac Day strip.

Over the decades Ginger Meggs has been immortalised in books, including hardbound annual collections of comics, a 1982 film, a 1985 postage stamp and a stage musical.

Now, for the centenary, Penguin Random House is bringing out a deluxe book with short stories by Tristan Bancks, the great-great-nephew of Jimmy Bancks, and illustrations by Chatfield. The book is being launched at the Sydney Writers Festival on Sunday, with Faber standing in for Chatfield who lives in New York.

Tristan Bancks, a children’s book author in his own right, said one of the central tenets of Ginger Meggs is that he dreams big and gives it a go.

“He is always trying to pull off big things,” Bancks said. “There are a few casualties along the way but he never sets out to actively be mean to anyone so he has this kind of innocence as well, which I really like.” 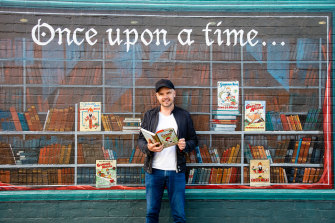 Faber added that Ginger Meggs showed a resilience of spirit that Australians aspire to – he failed just as often as Charlie Brown but his positivity stopped him from being a perennial loser.

“He’s a bit less down in the dumps than Charlie Brown,” Faber said. “He doesn’t win ’em all, in fact he wins very few, but he stays very positive about it, whereas Charlie Brown tends to lose all the time, and he’s very depressed about it.”

Our Morning Edition newsletter is a curated guide to the most important and interesting stories, analysis and insights. Get it delivered to your inbox.

05/01/2021 Lifestyle Comments Off on Mobile phones, bushfires and COVID-19: How Ginger Meggs has evolved with the times
Recent Posts