Brendan Nelson imagines an Australia Day that starts with a solemn interring of Indigenous remains and recognition of the rich First Nations history and “devastating disruption” at a new national place of recognition.

The Howard-era defence minister and former Australian War Memorial director has aired a proposal he has been considering for three years to redevelop Reconciliation Place in Canberra’s parliamentary triangle and use it to change the culture of Australia Day.

The proposal is similar to a longstanding plan for a national resting place, led by the Australian Institute of Aboriginal and Torres Strait Islander Studies and the Healing Foundation. 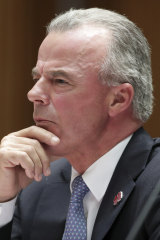 Dr Nelson acknowledges he speaks with an “awkward sensitivity” on the subject as a non-Indigenous person.

However, he thinks it can offer a threefold solution: deal with the practical issue of repatriating Indigenous remains when it is not known which traditional land they are from, publicly recognise the violence perpetrated against First Nations people and their dispossession, and address the increasing disquiet over marking Australia Day on January 26.

He came up with his idea while visiting the Tomb of the Unknown Soldier early one morning, thinking about whether the man inside might be Aboriginal, and looking across the “powerfully symbolic man-made vista” that runs between the War Memorial and Parliament House, which includes the tent embassy.

“It’s now time, with a sense of sanctity and dignity, that we create a precinct, at the centre of which could be the tomb of the unknown custodians or guardians, or a resting place, which would complete the picture,” he says.

“A very, very visible and practical reminder of the enormous contribution made by the First Australians to this nation.” 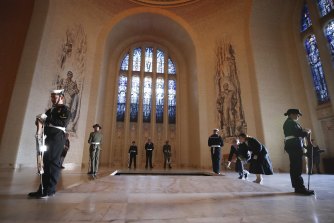 Dr Nelson envisages a monument with a “substantial footprint” using granite, marble and other stonework from across the country. As well as the resting place for remains, he believes it should depict massacres and violence against Indigenous people, the 1967 referendum, the Mabo decision and the 2008 apology, and profile key Indigenous figures.

Such a place could then become the focal point of a changed culture around Australia Day commemorations.

“It needs to need to be a day that begins with solemnity … around the reflection upon and celebration of Aboriginal life, history and culture, and the impact those events of Arthur Phillip arriving on the 26th of January had on Indigenous people,” Dr Nelson said.

“The centrepiece of a major event early in the morning of the 26th would be the internment of those remains that had come back over the preceding year. And then following that event, then we move into our citizenship ceremonies, we move into later in the day to our sport, our parties, our celebration of who we now are.”

The existing Reconciliation Place was commissioned by then prime minister John Howard in 2000. It consists of a small grass hill in Canberra’s Parliament-Memorial axis and 17 artworks on either side that commemorate the stolen generation and mark significant events, people and cultural practices.

Labor spokeswoman on Indigenous Australians Linda Burney is open to discussing Dr Nelson’s plan, noting the opposition took a similar proposal for a national resting place to the 2019 election.

“Australia is a modern, complex nation, with an equally complex and difficult past,” she said.

“Who we are as a nation and people, what our values are and what we believe, has changed over time, and will continue to change. It’s important we consider all of that complexity and change when we take a day to consider what it means to be Australia, and Australian, in the modern day.”

Liberal backbencher Andrew Bragg, who has written a book laying out the case for reconciliation and constitutional recognition, has described Reconciliation Place as modest and says it is inconceivable there is not a significant building in the parliamentary triangle reflecting the culture and history of Indigenous people.

He wants the government to commit to funding the Ngurra cultural precinct and national resting place before next year’s election.