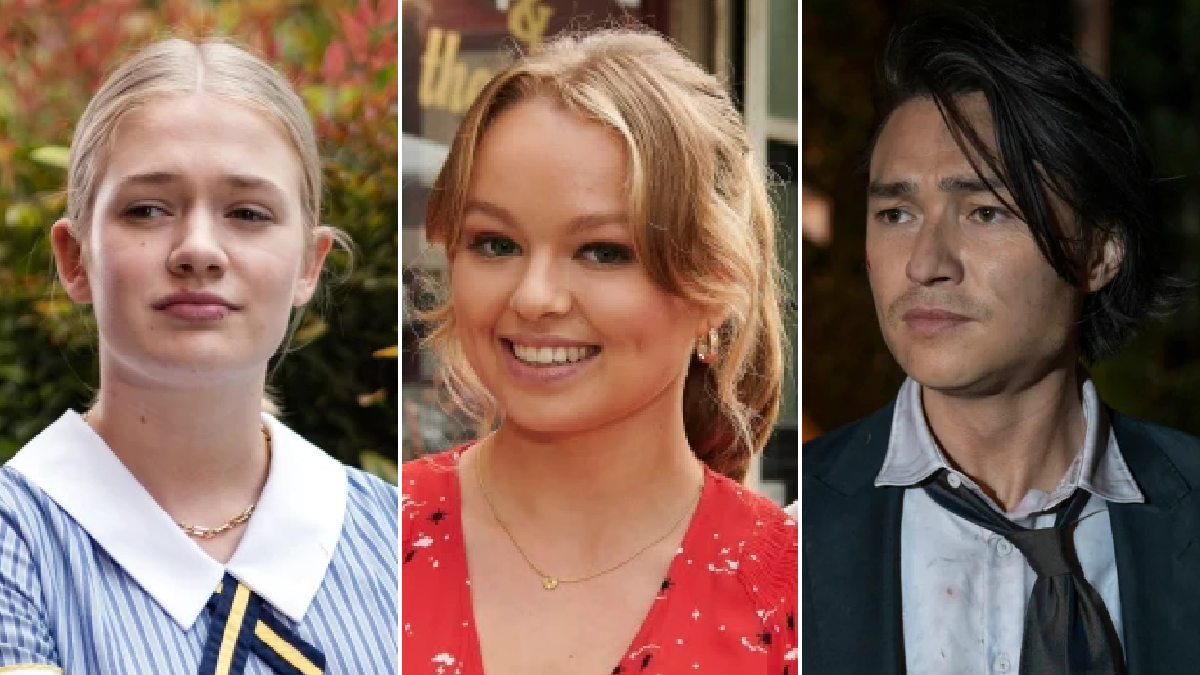 Neighbours launched its newest season with a bang, with huge twists, big returns and a storm catastrophe.

Terese Robinson’s (Rebekah Elmaloglou) near-death experience at the beginning of the year set the scene for what’s to come, with some interesting developments for the mysterious Glenn Donnelly story.

The biggest developments in the Channel 5 soap, however, saw Roxy Willis (Zima Anderson) and Kyle Canning’s (Chris Milligan) wedding day – as joyous as it was – end in complete and utter disaster, as a storm caused chaos during the celebrations.

Oh yes, and someone died as a result!

The long-running serial drama really has upped the ante, but with the fallout of this week’s events set to have huge ramifications, it’s safe to say that it’s only just the beginning of what’s to come in 2022.

Here’s everything we’ve got to look forward to in the immediate future!

The aftermath of a tragic death

Roxy and Kyle’s wedding was a truly delightful and community-driven event. But things took a devastating turn when a storm reigned down hell, endangering the lives of many a mainstay.

While Paul Robinson (Stefan Dennis) was injured in the disaster, it was ultimately Britney Barnes (Montana Cox) that perished in the atrocity.

Leo Tanaka (Tim Kano) struggles to come to terms with what happened, and upcoming scenes will see him distance himself from the people closest to him.

He wants to sue the hotel for what happened, despite everyone’s advising him not to. Even though he knows it won’t bring Britney back, he knows someone’s responsible, and he’s going to make them pay.

Will he succeed? Or will he allow himself the time needed to grieve?

The arrival of ‘complex’ Freya Wozniak

It was revealed last year that Lie With Me star Phoebe Roberts had joined the cast of Neighbours as newcomer Freya.

Jason Herbison, Neighbours and Lie With Me Executive Producer, said at the time: ‘We were all blown away by Phoebe’s performance in Lie With Me and knew Ramsay Street had to be her next stop.

‘We’ve created a fascinating character for her that is complex, mysterious and a risk taker, she’s going to be a lot of fun and Phoebe has already nailed the role.’

Freya will make her mark, that’s for sure, and she hits it off with Levi, who recently broke up with Amy.

But it soon becomes apparent that she has ulterior motives. The question is what is she up to?

Neighbours comes to London, with guest appearances from Amanda Holden and Sophie Ellis-Bextor

Harlow Robinson (Jemma Donovan) will take a trip to London later this year, where she will connect with her aunt Harriet (Amanda Holden).

The duo will set about solving a family mystery centring on Harlow’s mother and Harriet’s late sister Prue, who was played by Denise van Outen.

Britain’s Got Talent judge Amanda isn’t the only guest star in the storyline, as Sophie Ellis-Bextor will also make a cameo appearance.

Harlow, you see, is taken by surprise when the Murder on The Dancefloor hitmaker and Strictly Come Dancing star provides some pearls of wisdom around some of her late mother Prue’s actions.

But what will they find out?

Zara’s behaviour has left both the residents of Ramsay Street and the viewers at home totally unimpressed, but things are set to get much worse, as she starts at Erinsborough High.

She feuds with her mum Amy in upcoming scenes, and things take a dark turn when she pushes her.

Amy is fine at first in the aftermath of the clash.

But all of a sudden, she is overcome with pain. Instead of assisting her mum, however, Zara coldly walks away!

Amy collapses, unable to breathe or do anything to get herself help. Ned manages to find her in time and rushes her to hospital, but things do not look good.

Will Amy pull through? And will this prove to be the wake-up call Zara needs?

Kyle was stunned last year when he discovered that he has cancer, and subsequent scenes saw him and Roxy decide to tie the knot, determined to spend their lives together.

The ceremony went ahead, with the duo successfully saying: ‘I do’. The question is now is: what does the future have in store for them?

Longterm, we just don’t know. The immediate future, however, sees the couple embark on their honeymoon.

Kyle slaps on extra testosterone patches so he can perform in the bedroom, but things don’t exactly go as planned.

But there has been quite a lot of mystery surrounding his motives, with his connection to Terese causing problems for a number of Ramsay Street’s finest, namely Paul!

But just what will the future bring for Glen? Will he cause more mischief?

He finally admitted that he stole Therese’s ring. Stunned, Terese kicked him out, with Paul demanding that he leave the Eirinsborough in his rear-view mirror.

Will Paul get his wish? That seems unlikely somehow, which begs the question of what Glen will do now?

We’ll just have to wait and see!

Neighbours airs Mondays – Fridays at 1:45pm and 6pm on Channel 5.