Victorian universities have already received more than 33,000 applications to study nursing next year, mostly from year 12 students, in a sign interest in studying nursing continues to soar despite the COVID-19 pandemic stretching nurses unlike ever before.

The latest application figures from the Victorian Tertiary Admissions Centre reveal that universities had already received a total of 33,060 applications for nursing by November 4, more than one month before VCE results will be known, and almost two months before most university offers will be made. 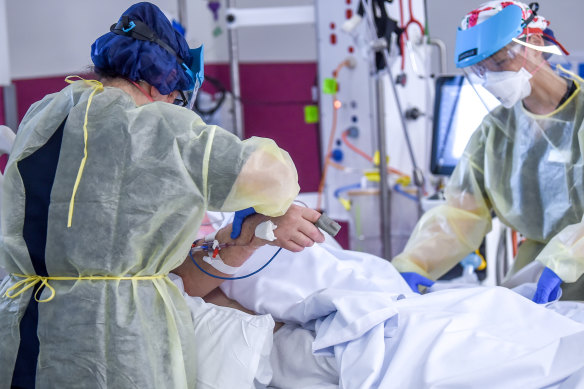 Victorian universities have already received more than 33,000 applications to study nursing next year, mostly from year 12 students, in a sign interest in studying nursing continues to soar, despite the COVID-19 pandemic stretching nurses unlike ever before.Credit:Justin McManus

The fresh figures come as Premier Daniel Andrews vowed graduate nurses and midwives, who enter Victoria’s struggling public system over the next year, will receive a $5000 sign-on bonus if the Andrews government is re-elected.

“You’ll receive a $5000 sign on bonus to say thank you for choosing public patients in public hospitals,” Andrews said on Wednesday morning.

The premier also announced a $150 million package to boost nurse-to-patient ratios in acute units as well as midwifery ratios on night shift and the trial of a new neonatal support nurse in maternity wards, which have been hit by severe shortages.

While the announcement has been welcomed by medical groups and unions, some warn not enough is being done to retain existing nursing staff as hospitals continue to grapple with a severe workforce crisis following a mass exodus of experienced healthcare workers.

Australian College of Critical Care Nurses Victorian president Rose Jaspers said mandating ratios would make a “massive difference” in improving the workload of nurses in intensive care, who were often short-staffed during shifts and managing more than one seriously ill patient at a time. The ratios would mandate one patient per nurse in ICU.

It was a sentiment shared by Australian College of Nursing national director of professional practice, Linda Davidson, who welcomed the $5000 payment for new nurses, but warned “it doesn’t help the nurses already in the system who have been through a horrific couple of years”.

Instead, Davidson said the governments should be focusing on support and professional development for nurses who were already in the system.

The extent of the nurses’ shortage in Victoria is difficult to quantify as many remain on the books, but had cut back their hours dramatically due to burnout on from the pandemic. Others have left the hospital system altogether and are working in other parts of the health sector.

The Australian Nursing Federation’s state secretary Lisa Fitzpatrick said the proposal would allow more workers to take up flexible hours and address major concerns such as the number of midwives working overnight.

Deakin University has received the highest number of applications, with 8217, followed by La Trobe with 5792, Monash with 5177 and ACU with 4490.

The figures are comparable to last year’s applications data at this time of the year, indicating that although nursing remains one of the most popular fields of study, the offer of a free degree has not yet triggered a spike in interest.

In August, the Andrews government promised to subsidise the HECS debt of more than 10,000 nursing and midwifery students. The pledge, limited to new domestic students, was to pay students $9000 while studying and a further $7500 if they work in Victorian public health services for two years.

Fees for nursing had already been cut by 45 per cent last year in an effort to attract more school-leavers into nursing, to a maximum student contribution of $3985 a year.

Universities cannot simply increase the number of nursing places they offer in response to demand, but must demonstrate to the Australian Nursing & Midwifery Board that enrolled students will be able to complete mandatory work placements as part of their studies.

Last year, the board introduced an exemption to the rule for students who could not complete their full allotment of placement hours due to COVID-19. The exemption is due for review at the end of 2022.