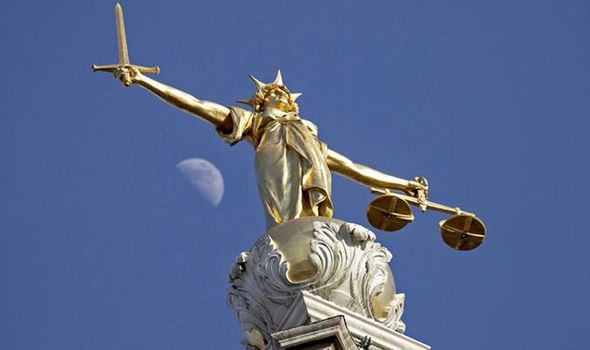 COURT NUMBER ONE of the Central Criminal Court – known to all as the Old Bailey – has hosted the most famous, and infamous, trials of the last century. Here, in Britain’s foremost criminal court, we can trace a version of the history of social and moral change that has occurred in this country since it first opened its doors in 1907. In one sense a court is simply a space bordered by four walls, laid out with internal fixtures. Yet juxtaposed with the ritual elements of the courtroom is the human drama and excitement.

Any criminal trial involves the determination of the guilt – or lack of it – of the defendant.

Great jury advocates understand human motivations and are able to harness the power of language.

And great jury speeches can be overwhelming; they have on occasion caused spectators and jurors to faint with emotion.

A trial is not hermetically sealed. It is the culmination of a chain of human actions and choices, some less freely made than others, that have occurred in real life.

The author Sybille Bedford, writing in 1957 at the trial for murder of Eastbourne GP Dr John Bodkin Adams, saw some drawbacks in Court Number One: “For one thing it is cramful of woodwork. Stained oak obstructs foot and eye. Boxes, desks, tables, benches fitted ingeniously enough, jut at all angles.”

At the Lady Chatterley’s Lover obscenity trial, the poet Sylvia Plath thought the “famous” Court Number One small and jammed (though she reported later that she had enjoyed her day “immensely”). 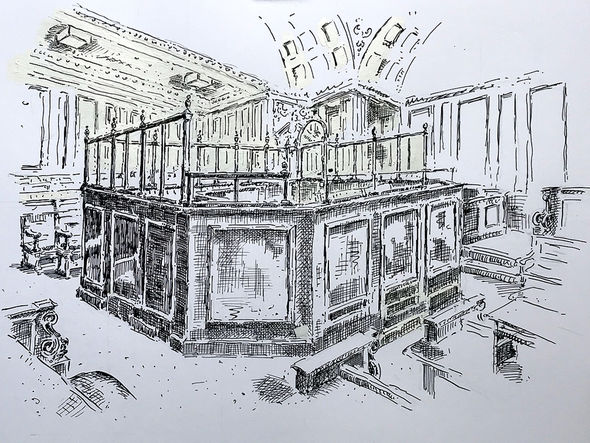 But for all its archaic inconveniences, Court Number One is magnificent and its configuration is heavy with meaning and symbolism.

We start at the centre, the dock, above, which dominates the courtroom.

Bulky and vast, it is like an impregnable fortress, a room within a room, measuring some 16 feet by 14 feet.

It tells all present that the business of the court is directed at the person or persons it contains, referred to for much of the 20th century as “the prisoner”, now known more neutrally as “the defendant”.

Looking at that dock, it is hard not to think of the disparate people it has temporarily housed.

In that space have sat Ian Huntley and Maxine Carr, below, Barry George, Colin Stagg, Dennis Nilsen, Peter Sutcliffe, Jeremy Thorpe, John Stonehouse, members of the so-called Angry Brigade, the Kray Twins, Stephen Ward, George Blake, Ruth Ellis, William Joyce (Lord Haw-Haw), the Brides in the Bath murderer George Smith, and Dr Crippen, to name just a few of the famous or infamous people – some guilty, some not – who have faced trial there. 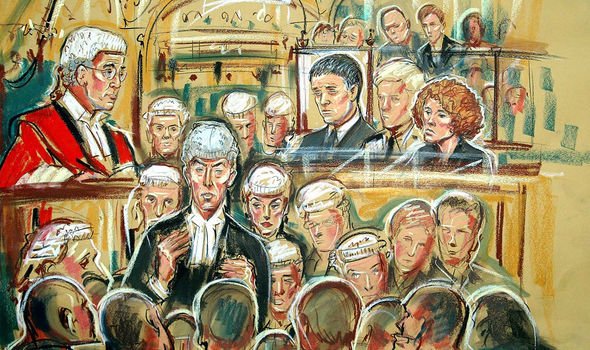 The presumption of innocence the accused enjoys seems at odds with the grandeur of this palladium that pens them in.

Defendants can take a rather more jaundiced view of their enclosure.

To Jonathan Aitken, accused of breaching the Official Secrets Act in Court Number One in 1971 in the so-called Sunday Telegraph secrets case, it looked and felt like “a rather run-down municipal swimming-baths”.

Aitken may hold a unique place in legal history for having been tried twice in Court Number One for different offences.

His first ended in acquittal.

His second was in 1999, when he was sentenced to 18 months’ imprisonment for perjury. 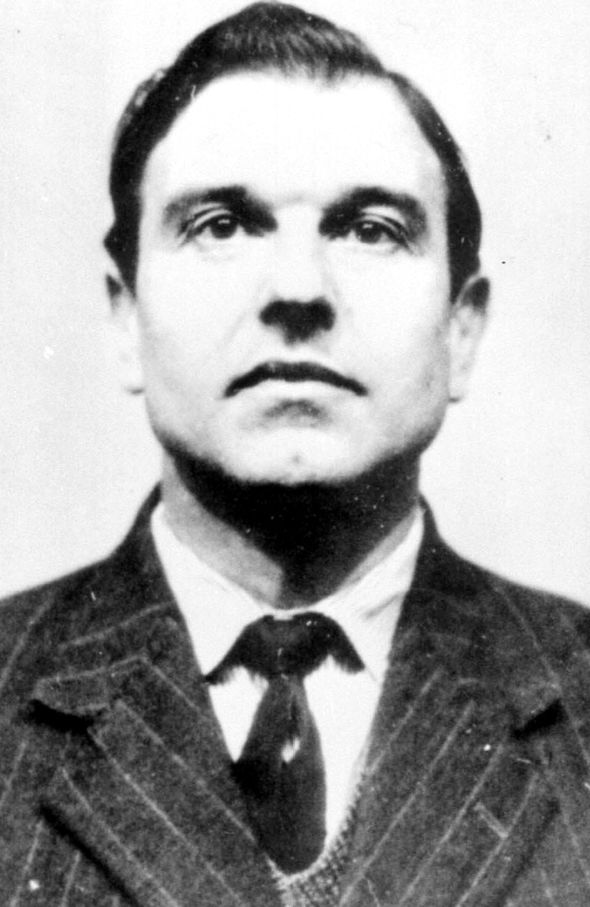 The defendant sits facing the judge’s bench, almost at eye level with the judge some 25ft away.

Defendant and judge are raised above the other participants in the court process.

To the judge’s left and the defendant’s right are counsel’s rows, running perpendicular to the dock.

The advocates position themselves in rows of green leather seats built into the bench behind.

Like chairs in a theatre stall, they can be flipped up; like misericords in a cathedral they can be leaned against. 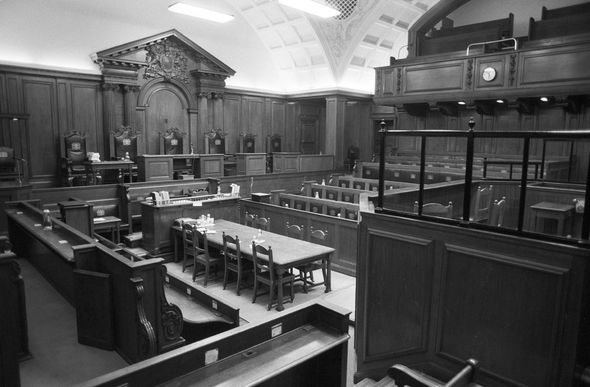 The barristers have a narrow wooden desk on which to place their papers and lectern.

Behind counsel there are rows of benches raking up to the wall, reserved for what used to be known as the City Lands Committee of the Corporation of London.

In especially sensational cases of the past, these benches – the stalls of Court Number One – were often crowded with the prurient or the merely curious.

The courtroom could sometimes seem like part of the London social season.

When Frederick Bywaters and Edith Thompson went on trial in December 1922 for murdering her husband, one spectator described the atmosphere as resembling “the opening night of a West End play”.

When counsel stand to address the judge, they must crane their heads round to their right.

If they look straight ahead they see the fourth side of the internal square that makes up the dramatic vortex of the courtroom: the so-called jury box, in fact, two enclosed rows, accommodating six jurors each.

All the business of this court is directed ultimately to the task of persuasion.

The final arbiters of fact and guilt are the 12 randomly selected men and women sitting ringside.

The raised jury bench runs the full width of the courtroom.

Behind it the woodwork becomes elaborate and imposing: there is a large Palladian broken pediment flanked by double Corinthian pilasters as if classical grandeur were synonymous with justice. 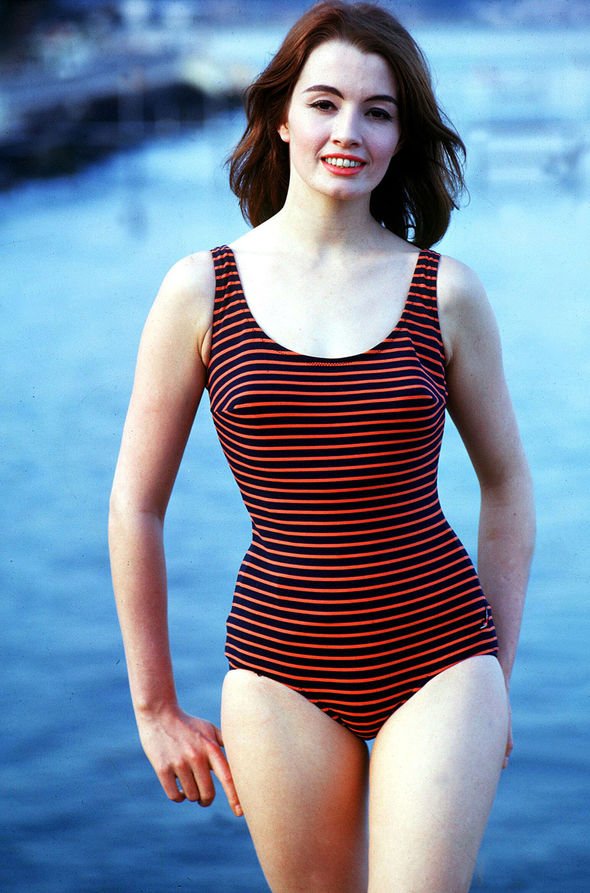 In a corner of this internal square, between the jury box and the bench, is the witness box.

The witness stands – they may even be invited to sit – at conversational distance from the judge and facing counsel.

There is an intimacy which size would tend to undermine.

Cross-examination cannot be conducted by megaphone.

Witnesses should not have to raise their voice.

Journalists can sit on rows to either side of the dock.

Even from here sightlines are interrupted by all the stage scenery.

The public gallery, accessed by a separate entrance, juts out over part of the courtroom and cut off from the action beneath.

Defendants were objects of fascination.

The only known English photograph of a defendant being sentenced to death – the poisoner Frederick Seddon – was covertly taken from this gallery in 1912.

Their crimes had set them apart from the common run of humanity; they were now participating in a great drama.

Momentous and tragic stories were written at the Old Bailey, modern folklore.

The weight of history suffuses Court Number One.

During the early part of the 20th century, it was not unknown for individuals to take up their place in the queue for the public gallery with a view to selling it on; the going rate in one trial was £5, then a princely sum.

Sometimes the queue started at 4am, sometimes as early as 2am.

Sometimes it formed the evening before as if made up of hardy bargain-hunters bivouacked outside a department store for the sales.

The proceedings taking place in Court Number One held an unforgiving mirror to our age.

Yet while its Edwardian architecture is outwardly unchanged, the Old Bailey of the 21st century is a very different place.

Today, of the 13 full-time Bailey judges, six are women.

Students regularly visit, and every year a play of legal vignettes is performed in Court Number One for four nights.

It is a long way from the grim courtroom where scores of people were sentenced to death up to 1965.

07/02/2019 Lifestyle Comments Off on Old Bailey Court No 1: Where justice is seen to be done
Recent Posts