“A catastrophe seemed imminent to me,” wrote Louis Leroy in a notorious exhibition review of April, 1874, “and it was reserved for M. Monet to contribute the last straw.”

That last straw was a painting called Impression Sunrise, a grey, misty view of a harbour with the silhouettes of two small boats in the foreground, and the shadowy forms of sailing ships, chimneys and cranes in the distance. The sun hangs in the sky as a bright orange disc, scattering its rays on the water. 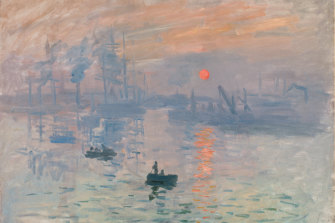 At the age of 65, Leroy was the oldest reviewer of the inaugural exhibition of the Anonymous Society of Painters, Sculptors and Printmakers, held at the studio of the photographer, Nadar. More humourist than critic, Leroy had once been an artist. His poison pen gave him a weapon with which he took revenge for his own failures and frustrations, casting scorn on the trendy, modern work produced by the younger artists.

Claude Monet, who was 33-years-old at the time of the 1874 exhibition, was an easy mark. Never especially interested in titles, when pressed to come up with a name for this picture, he replied: “Use Impression.” He thought the painting was too vague to be identified as a view of Le Havre, so he settled on an equally vague title.

For Leroy, writing in the satirical journal, Le Charivari, this was an invitation too good to refuse. He tells how he walks around the show with an old, much-decorated (fictional) landscape painter, père Vincent, who becomes completely deranged as he examines this new art. The writer, who begins as an apologist for the young men, is appalled by his mentor’s growing mania, which he dutifully records:

"Impression I was certain of it. I was just telling myself that, since I was impressed, there had to be some impression in it — and what freedom, what ease of workmanship! A preliminary drawing for a wallpaper pattern is more finished than this seascape." 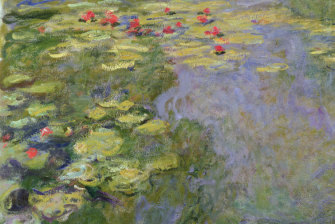 When a painting is praised so extravagantly by a madman all sane readers can only shake their heads. Leroy’s article is a sustained piece of irony that mocked the artist’s skills and pretensions. The humour hit home, and Monet and his friends became mockingly known as “Impressionists”, but the last laugh was on the writer because this is the only reason we remember Leroy today.

Four days after this hostile review, another critic, Jules-Antoine Castagnary, took up the “Impressionist” label, giving it a positive spin. Within the group itself Renoir argued they should embrace the name, rather than see it as a term of derision. He saw it as a challenge to the “man in the street” who should realise that he probably wouldn’t like an Impressionist show, and so be forewarned: there was no point in complaining or asking to have your entrance money refunded!

A few weeks ago I stood with French curator, Geraldine Lefebvre, on the spot where one of those little black boats floated in the harbour of Impression Sunrise. The bassin is now hidden beneath a vast slab of concrete installed at the end of World War II, after Le Havre had been bombed to smithereens by the Allies. 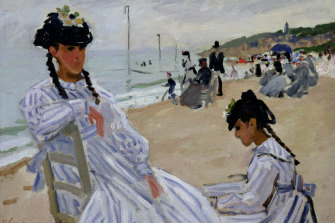 Madame Lefebvre pointed to a modern, nondescript apartment building, identifying it as the former site of the Hôtel de l’Amirauté, where Monet had sat, studying the view from the balcony of a room on the third floor. The date was most probably November 13, 1872, although an exhaustive analysis of records and weather conditions has not proved conclusive.

One may have to exercise a little imagination to see the scene as it appeared to the artist.

One has to travel to the outskirts of Le Havre and the surrounding towns to see the views as Monet saw them. The artist’s family home is preserved, with rooms painted in similar colours to his more famous house in Giverny. The difference is that Giverny is now a major tourist attraction, whereas this house remains in private hands. The size of the family home shows that Monet was born into a wealthy family, even though he would endure years of poverty while establishing himself. Looking out of his bedroom window one can imagine the young artist sketching the scene below, although he wouldn’t have been looking at the tennis court or the swimming pool. 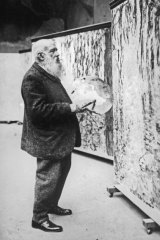 Claude Monet at work on monumental waterlilies paintings in his studio in Giverny c. 1920.

Travel north from Le Havre and one arrives at the cliffs of Étretat. Travel south for the picturesque towns of Honfleur, Deauville and Trouville. Strip away the trappings of tourism and the scenes are recognisable from hundreds, perhaps thousands, of paintings. Normandy was always a prime destination for holidaymakers from the city, but Impressionism has made the coast into a place of pilgrimage for artists and art lovers from around the world. Everywhere one looks there is an echo of a painting, although – as in the case of Impression Sunrise – one may have to exercise a little imagination to see the scene as it appeared to the artist.

Monet: Impression Sunrise at the National Gallery of Australia is an exhibition that investigates the origins of Impressionism from the perspective of its most celebrated exponent. For the first time ever, the painting that gave the movement its name has travelled to Australia, along with a range of other important works from the Musée Marmottan Monet in Paris. The paintings of Monet and his fellow Impressionists are supplemented by pieces by his seminal influences – Turner, Delacroix, Courbet, Boudin and Jongkind.

We all know how Monet’s career evolved, culminating in those vast, semi-abstract waterlilies painted in his garden. The NGA show also features some of these late works, but the emphasis is on beginnings: on all the elements that came together to create Impressionism.

Monet was born in Paris in 1840, but by 1845 the family had moved to the port city of Le Havre, at the mouth of the Seine. His father was a prosperous dealer in shipping supplies, but Claude never wanted to be anything but an artist. While still in his teens he took drawing lessons and earned a useful income from selling caricatures of local personalities. His artistic ambitions were crystallised in 1855 or 56, when he met Eugène Boudin (1824-98), a hard-working local painter who made a living selling his seascapes to tourists. Boudin believed the age of Romanticism was dead, and was content to seek out “the simple beauties of nature.”

The well-to-do Monets viewed the artist as undesirable company for their son. We think of Boudin today as an important precursor for the Impressionists, but his taste for “simple beauties” was not appreciated by the local bourgeoisie. His brother, Louis, recorded people saying: “What pleasure can he take in sticking his feet in the dung, in the mud, so as to depict such filth?”

Boudin was modest about his own achievements, telling an interviewer, “I am a loner, a daydreamer who has been content to remain in his part of the world and look at the sky. The future will treat me as it does all of us. I am very much afraid it may be oblivion.” 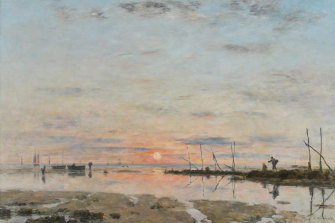 At the very worst, Boudin would not have been forgotten, but he may have been viewed as merely a petit maître of Normandy, had it not been for his association with Monet, and with other artists such as Courbet and Whistler. His work lacked their strength and individuality, but he was tireless in recording the Normandy coastline in all conditions.

Monet’s other mentor was Johan Barthold Jongkind (1819-91), a Dutchman he met at Sainte-Adresse, on the outskirts of Le Havre, in 1862. At this stage of his life, Jongkind had emerged from a dissolute phase, and settled down with another Dutch painter, Joséphine Fesser. He worked quickly, painting with a freedom that Monet found inspirational. If Boudin had fired the young artist’s passion for landscape, Jongkind completed the process.

Jongkind’s coastal landscapes are still impressive, but to his contemporaries his paint handling and sense of colour seemed exceptionally daring. Late in life, Monet would say: “…he was my real master. It was to him that I owe the final education of my eye.”

The final stage of that education would take place in London, where Monet went to escape the Franco-Prussian war of 1870. There he became acquainted with the works of J.M.W. Turner (1775-1851), and with the city’s famous fog. The NGA show features some of those radical, quasi-abstract pictures Turner painted in his later years that Monet was able to view in London. Works such as Stormy sea with dolphins (c.1835-40) or Inverary Pier, Loch Fyne: Morning (c.1845) pushed the boundaries of representation further than any artist of the 19th century had ever gone. To Monet these paintings must have seemed astonishingly modern. 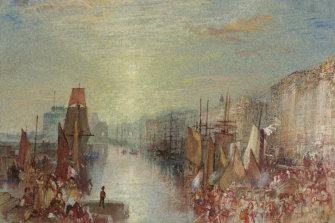 Returning to France at the end of the war, Monet had become a mature and confident artist who was beginning to find a market for his work. He settled with his family in Argenteuil, a town on the Seine, northwest of Paris, where rural life was rapidly being replaced by factories spewing out smoke. When he wanted to paint seascapes he travelled back to Normandy, but even there, as he gazed out from his hotel room in Le Havre, he felt the lure of the modern world. In the chimneys and cranes, the mist and smog, Monet saw a novel kind of beauty that looked to the future, not the past. It no longer made sense for artists to paint Greek myths and ideal landscapes, a new world required a new vision, in which the speed of progress demanded a more spontaneous approach to painting. Impressionism became an art of the fleeting glimpse, the fugitive moment. Leroy’s ‘last straw’ was only the first step.