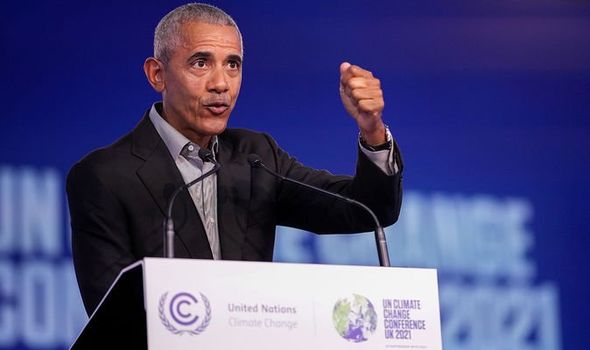 The former US president, 60, said yesterday that progress has been made in recent years but the world is still “collectively and individually” falling short. Speaking from COP26 in Glasgow, he said the “planet has been wounded by our actions”.

Mr Obama added: “We have not done nearly enough. We are going to have to do more.”

He pointed out that most countries have failed to meet promises made in the Paris Agreement in 2016. And he referenced the words of William Shakespeare in Othello when he said the wounds would be healed by degrees.

Mr Obama said: “What wound did ever heal but by degrees?”

He added: “If we start with that spirit and each of us can fight through the occasional frustration and dread, if we pledge to do our part and follow through, we can secure a better future. We have to.

Intent on his message, Mr Obama believes the US is “moving more boldly” after four years of “active hostility” to the climate crisis from Donald Trump.

He said he “wasn’t real happy” his successor pulled the US out of the Paris accord. And he was disappointed Russia and China snubbed Glasgow, saying: “It was discouraging. A shame.”

But he is encouraged by the youth movement led by Greta Thunberg and referenced his mother, saying: “She’d look at me and say, ‘Don’t sulk, get busy, get to work and change what needs to be changed’. That’s exactly what young people are doing.”

11/09/2021 Lifestyle Comments Off on Our planet is wounded, lets start to heal it urges Barack Obama
Recent Posts