Buckingham Palace have shared rare photographs of Prince Philip including from his expedition to Antarctica in the 1950s to mark Prince William’s new patronage from his grandfather.

The Duke of Edinburgh, 99, is seen with Adelie penguins at the Penguin Rookery Base, near Adelaide Island, Antarctica, in 1957, in the first of four images revealed in a recent Instagram post on the Royal Family’s account.

They were shared to celebrate the Duke of Cambridge, 38, taking over from Prince Philip as patron of the British Trust for Ornithology (BTO), which aims to empower communities to protect local bird species and their natural habitats.

Prince Philip’s fascination with birdwatching began in 1956 during a voyage on the Royal Yacht Britannia between New Zealand and Antarctica when he started to photograph and identify native seabirds. 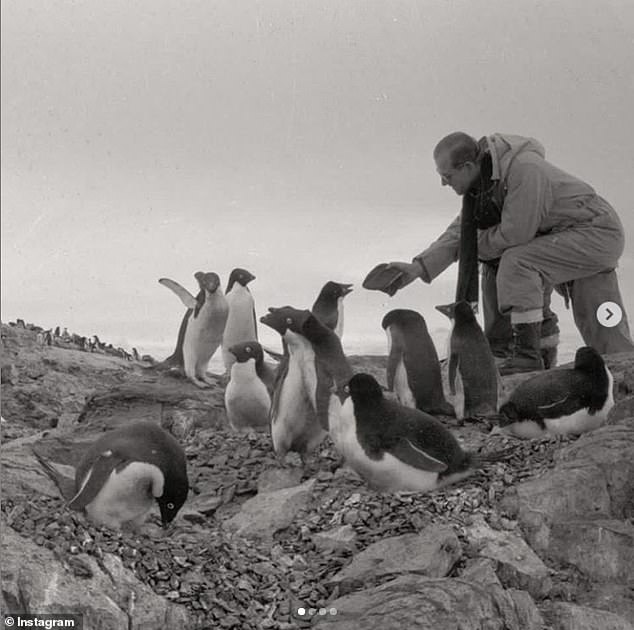 In a second image shared on the post yesterday, Adelie penguins, which are native to Antarctica and named after a French explorer’s, are captured in a picture taken by the Duke of Edinburgh in 1957.

The third snap showed the certificate designed by royal and the artist Edward Seago to mark the Royal Yacht Britannia’s crossing of the Antarctic Circle.

During the duke’s world tour between 1956 and 1957, he became the first member of the Royal Family to cross the Antarctic Circle, which means he is entitled to join ‘The Order of the Red Nose’, a group celebrating those who have completed the feat.

This trip and a second across the central Pacific in 1959, inspired Philip’s book Birds From Britannia, published in 1962.

Meanwhile, the final image shared on the post captured Prince Philip in 1963 with the celebrated British ornithologist Sir Peter Scott, and Minnie, a Bronze Winged Duck. 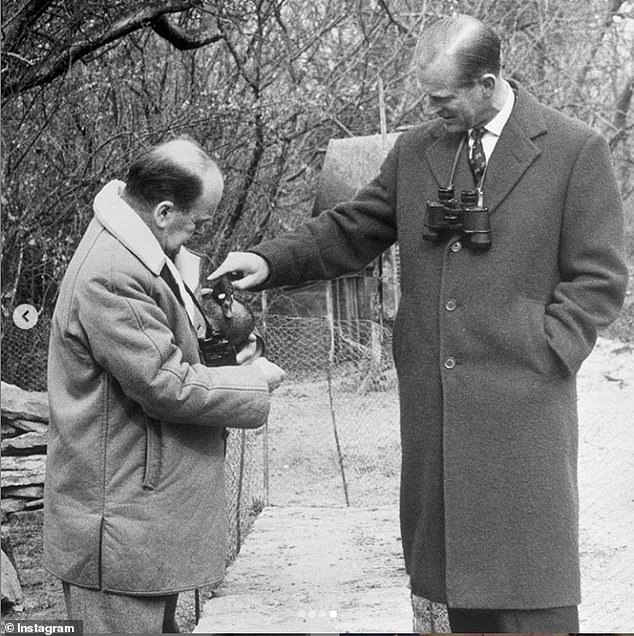 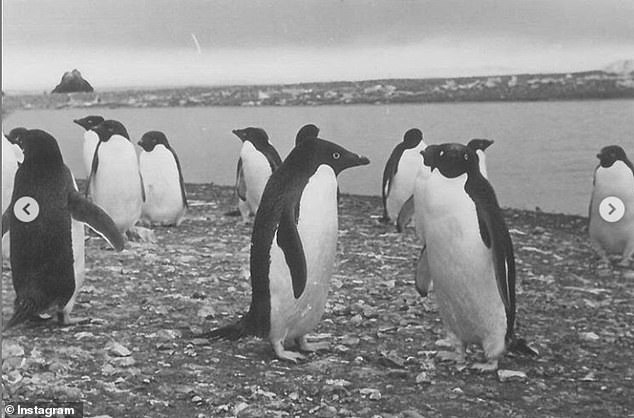 The Duke of Edinburgh photographed Adelie penguins (pictured) at the Penguin Rookery Base, near Adelaide Island, Antarctica, in 1957

The British Trust for Ornithology aims to empower communities to protect local bird species and their natural habitats in order to ensure they are preserved for generations to come, whilst also working to promote the benefits of the natural world on our health and wellbeing.

Through its network of volunteers, the BTO gathers data to build upon our understanding of the natural world, providing a solid evidence base that supports informed decision-making and conservation action.

The Duke of Edinburgh has been Patron of the BTO for over thirty years, and is a lifelong ornithology enthusiast.

Dr Andy Clements, BTO Chief Executive, said: ‘I am delighted that The Duke of Cambridge has become our Patron, following on from his grandfather who worked so tirelessly on our behalf.

‘We hope that we will be able to support The Duke’s strong interest in protecting the environment through our evidence-based work around environmental issues in the UK.’ 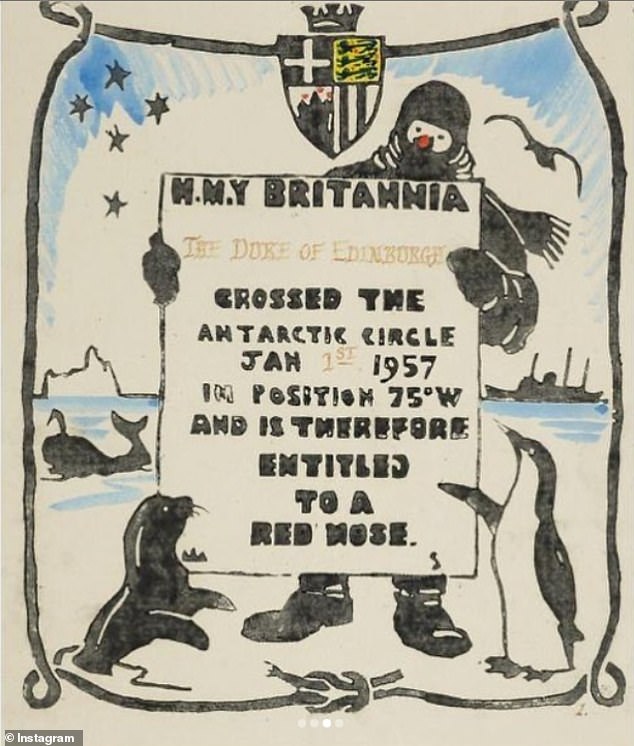 Prince William has also followed in the Queen’s footsteps to become the figurehead of Fauna and Flora International (FFI).

Established in 1903, Fauna & Flora International is the world’s oldest international wildlife conservation organisation and the Queen has held the role of patron for almost seven decades.

FFI focuses on protecting biodiversity, which underpins healthy ecosystems and is critical for the life-support systems that humans and all other species rely on.

It protects threatened species and ecosystems worldwide, choosing solutions that are sustainable, based on sound science and that enhance human well-being.

Operating in more than 40 countries worldwide, FFI is also a founding member of United for Wildlife, and was recently announced as Global Alliance Partner of The Earthshot Prize.

Prince William launched his £50million Earthshot Prize earlier this month, which aims to recognise solutions, ideas and technologies which ‘repair the planet’.

WHAT ARE ADÉLIE PENGUINS?

Adélie penguins are a common bird found all over Antarctica.

There are thought to be over 250 colonies of the birds around Antarctica which vary in size and can reach group sizes of several hundred thousand.

They can swim at 5 miles per hour (8.0 km/h) and are often predated on by leopard seals and, occasionally, killer whales.

Their diet consists mainly of krill and silverfish.

Commercial fishing for krill in Western Antarctica, combined with climate change, has seen a steady decline in the numbers of the birds.

A recent study found a previously undiscovered ‘supercolony’ of Adélie on an archipelago on the Northern tip of Antarctica.

Danger Islands plays home to 1.5 million of these birds, more than the rest of the Antarctic region combined.

10/20/2020 Lifestyle Comments Off on Palace shares photos from Prince Philip's expedition to Antarctica
Recent Posts
We and our partners use cookies on this site to improve our service, perform analytics, personalize advertising, measure advertising performance, and remember website preferences.Ok