Wong was on a flight back from the Quad leaders meeting in Tokyo on Wednesday when Reuters reported on a new draft document that would significantly expand Beijing’s footprint in the region. 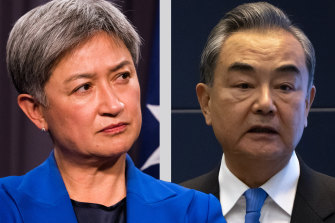 Foreign Affairs Minister Penny Wong and her Chinese counterpart, Wang Yi, are both touring the Pacific.Credit:

“China has made its intentions clear. So too are the intentions of the new Australian government,” Wong said in a message sent from the government plane.

The proposal, which will be pushed by China’s Foreign Minister Wang Yi on his 10-day tour of the Pacific, would allow the Chinese government to provide high-level police training and security and data cooperation across the region.

The new Labor government had been briefed that an expansion of the Solomons deal was possible but only four days after winning the election faces the challenge of matching Beijing’s lobbying blitz in the region.

Wong, who was sworn in on Monday, has made the Pacific a top priority after labelling the China-Solomons deal the biggest Australian strategic blunder since World War II. The Solomons deal will give Beijing the power to use force to protect its assets three hours flight from Brisbane.

The duelling visits by Wong and Wang set up a showdown over foreign and economic policy toward Australia’s closest neighbours which are vital to both China and Australia’s strategic interests.

Wong will fly to Fiji on Thursday to meet with Prime Minister Frank Bainimarama, the first of up to a dozen visits in a six-week campaign ahead of the Pacific Islands Forum in August.

“Australia will listen to our Pacific partners as we work together to face our shared challenges and achieve our shared goals – including tackling climate change, pandemic recovery, economic development and regional security,” she said on Wednesday.

“After a lost decade we’ve got a lot of work to do to regain Australia’s position as the partner of choice in the Pacific, in a region that’s less secure and more contested, but that work starts now.”

The Chinese foreign minister will arrive in the Solomon Islands on Thursday for the first time since the deal was signed with Honiara. The Solomons is the first stop on his marathon tour, which also includes East Timor, Kiribati, Samoa, Fiji, Tonga, Vanuatu and Papua New Guinea. 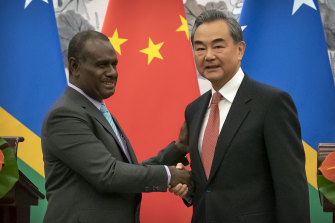 Beijing’s new Pacific agenda, which is already facing resistance from some countries including Micronesia, is expected to be debated at a Foreign Ministers meeting in Fiji on May 30.

Wong faces a diplomatic test trying to convince more Pacific Island nations not to partner with Beijing in exchange for security guarantees after years of political disputes and economic turmoil exacerbated by COVID-19.

Solomon Islands Prime Minister Manasseh Sogavare said in April that he found it “very insulting to be branded as unfit to manage our sovereign affairs or have other motives in pursuing our national interest”.

East Timor President Jose Ramos-Horta told The Sydney Morning Herald and The Age on Monday that “it would be a total mistake not to have a good relationship with China”.

On Tuesday, Wang told regional leaders at a UN forum that cooperation in the Asia-Pacific “should not be disturbed” and that the area was where “China lives and thrives”.

“We should adhere to the vision of common, comprehensive, cooperative and sustainable security, and should not pursue one’s own security at the cost of others’ security,” he said.

Beijing has been criticised by the US, Japan, India and Australia for using economic agreements to lay the groundwork for a military presence in the region.

On Wednesday, the Quad leaders said in a joint statement the four countries “strongly oppose any coercive, provocative or unilateral actions that seek to change the status quo and increase tensions in the area”.

Wang has also faced claims of excessive secrecy about his trip, with no firm itinerary dates and restrictions on the journalists allowed to attend Wang’s first press conference in Honiara. China’s top diplomat will only take one question from Chinese state TV while he is in the Solomons capital.

Chinese Foreign Ministry spokesman Wang Wenbin would not elaborate on the details of the trip on Wednesday.

“This visit by Foreign Minister Wang Yi will further enhance the political mutual trust between China and these countries,” he said.