Nick Jonas and Priyanka Chopra cozy up during lunch date

Paradise remains free of trouble according to Priyanka Chopra.

The 39-year-old actress washed away all fears of a split from husband Nick Jonas with a simple — but thirsty — comment on his latest workout video.

“Damn! I just died in your arms…” the “Only Human” singer’s wife commented on the Instagram posted Monday afternoon.

She added the heart-eye emoji and the sweating emoji to further drive home her point.

The video in question shows Jonas, 29, powering through some heavy bicep curls while staring at himself in the mirror.

(It’s hardly the first time the couple has publicized flirtatious pics: In August, Priyanka posted a snap of her husband taking a fork and knife to her butt while she was wearing a bikini, joking, “Snack,” in the caption.)

Eagle-eyed fans were recently up in arms about the status of the Chopra-Jonas marriage after the “Quantico” actress removed her last names from her social media accounts.

It remains unclear why Priyanka dropped her last names from the profiles — maybe she’s going for a single-moniker vibe à la Madonna or Cher? 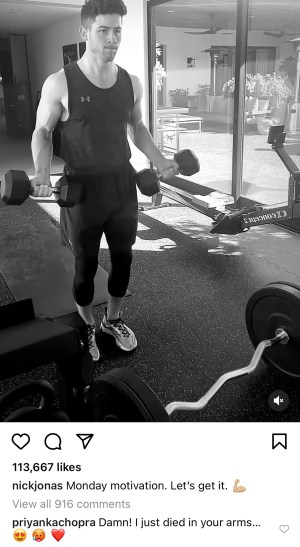 But Chopra’s workout comment may allow fans worried about a split between the photogenic couple to breathe a sigh of relief about the status of their romance. Prior to the relationship pseudo-scare, everything seemed hunky-dory between the two when they celebrated their first Diwali together in their new home.

The couple shared several photos on social of their star-studded fête in honor of the festival of lights with guests like Chrissy Teigen and John Legend in attendance.