Reason Party leader Fiona Patten and a moderate Liberal fear a group of new religious conservative candidates likely to be elected at the November state election could block expanded reproductive rights for women and potentially wind back euthanasia laws.

Patten’s bill to cut funding to religious public hospitals that refuse to offer abortion and euthanasia was voted down by Labor on Wednesday, but the upper house MP told The Age she would pursue a broader abortion reform package next election. 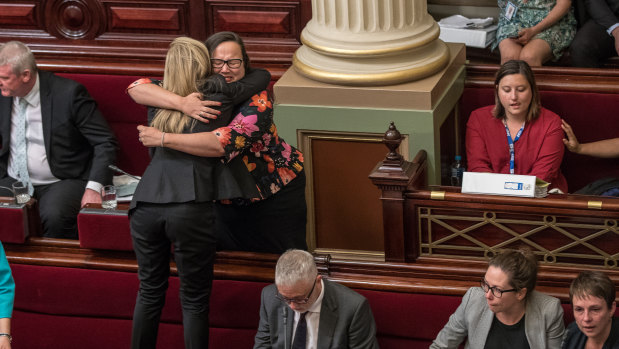 After a marathon 29-hour sitting to pass euthanasia laws in 2017, Fiona Patten stands on the seats to hug Labor’s Harriet Shing.Credit:Jason South

Patten – who played a key role in left-wing reforms allowing sick people to choose to die and drug users to inject heroin in safe locations – worries a new religious bloc in the Liberal Party and a larger group of Labor MPs from the traditionally conservative shop workers union could prevent future changes.

When Victoria’s nation-first euthanasia laws are reviewed by parliament after the election, MPs will get the chance to make assisted dying easier or more difficult to access.

If re-elected, Patten wants to reintroduce her abortion bill next term, and will also push for debates on increasing access to abortion hubs and the expansion of prescriptions for medical abortions. 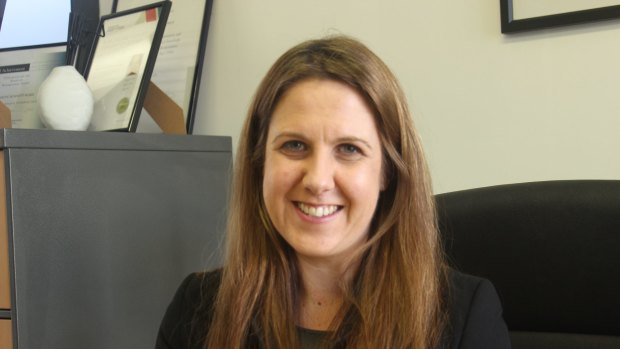 Patten, who claims one patient a week is being turned away when seeking a termination at a Victorian hospital, failed to secure a commitment from the government to revisit her proposal after the election. Labor and the opposition voted against her bill, while seven MPs, including the Greens, supported it.

The bill followed the US Supreme Court’s decision in June to overturn Roe v Wade, the 1973 case ruling that ensured women in America had a constitutional right to terminate a pregnancy.

“[It’s] dangerous to assume that our abortion laws will never change and that there will not be other pushes for legislative change that creates further harm,” Burnett-Wake said during debate on Patten’s bill.

“There are changes on the horizon, and soon some of these seats may very well be filled by representatives who do not believe in sensible freedoms for every individual.”

In the same debate, Employment Minister Jaala Pulford said it was up to “all of us to elect and to select to our parliaments conscious of people’s views on these things because these are never closed”, while Greens leader Samantha Ratnam said some Liberal Party figures were “emboldened” by the US Supreme Court’s decision to remove constitutional protection for abortion rights.

Five Liberal Party candidates running in November have links to church groups. They include upper house candidates Renee Heath (from the City Builders Church), Anne-Marie Hermans (a former Family First candidate), Moira Deeming (who has denounced abortion), Box Hill candidate Nicole Werner (a former Pentecostal pastor) and Ringwood candidate Cynthia Watson (a prominent Mormon). None of the candidates answered questions from The Age about their positions on abortion and assisted dying. 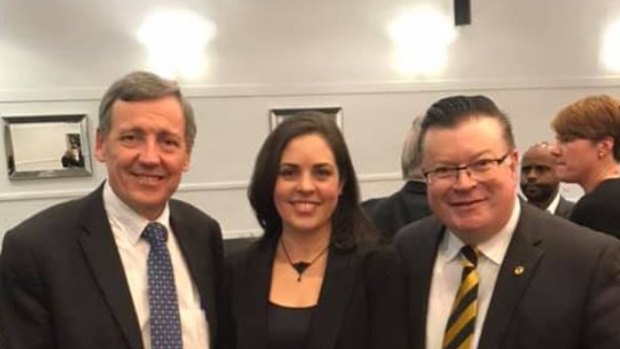 On the Labor side, at least four new MPs affiliated with the Shop, Distributive and Allied Employees Association union are likely to enter parliament as part of a power-sharing deal with the Socialist Left faction, whose MPs championed much of the government’s progressive social agenda.

Planning Minister Lizzie Blandthorn – who is affiliated to the SDA and opposes euthanasia and abortion – is moving from the lower to upper house. Candidates Iwan Walters and Kathleen Ward-Matthews refused to disclose their policy positions when contacted, while Michael Galea and Daniela De Martino could not be contacted.

MPs from this union, led by former deputy premier James Merlino, spearheaded internal opposition to the government’s assisted dying legislation in 2017. But the laws passed the upper house by 22 votes to 18.

Victorian SDA secretary Michael Donovan refused to answer questions about whether he only selected candidates with conservative backgrounds. “If you want to find out what candidates’ views, you can go and talk to candidates,” he said.

An MP from Labor’s left faction said the higher proportion of SDA candidates could influence caucus debates on social reform. However, she stressed the SDA had modernised to some extent, and not all of its candidates held the same conservative views.

Labor sources, speaking anonymously to detail private considerations, said the government did not view Patten’s bill through the prism of abortion ethics. Rather, it voted down the bill because it believed the proposal failed to address the issue of abortion access where it is lacking in regional areas. The government also thought it was dangerous to threaten to cut funding from religious hospitals, such as St Vincent’s.

Cut through the noise of federal politics with news, views and expert analysis from Jacqueline Maley. Subscribers can sign up to our weekly Inside Politics newsletter here.