Enrique Tarrio, the leader of the Proud Boys, was arrested in Washington, D.C., on Monday, a source familiar with the case told CBS News. Tarrio’s arrest was later confirmed by D.C. Metropolitan Police.

He was arrested in response to an outstanding warrant on a misdemeanor charge of destruction of property connected to the burning of a Black Lives Matter banner at a historic Washington, D.C., church last month; but when he was detained, Tarrio also had in his possession two high-capacity magazines, according to a source familiar with the case.

Tarrio’s arrest comes just 48 hours before his pro-Trump group is planning to rally Wednesday in Washington, D.C., in support of the president’s last-ditch efforts to overturn the results of the presidential election. The D.C. National Guard plans to activate hundreds of troops to support D.C. Metropolitan Police if the rallies proceed as planned. The possession of the magazines is a felony in the District, and if Tarrio is charged with a felony, that could result in a “stay away” order from D.C.

A source familiar with the case told CBS News his arrest was not related to the upcoming demonstrations, but rather to Tarrio’s return to D.C. and his alleged past conduct.

A source familiar with the case told CBS News that Tarrio is being held overnight in Washington, D.C. A charging decision in relation to the possession of the two high-capacity firearm magazines — a felony in the nation’s capital — is pending. The charging decision is expected before Tuesday’s hearing. 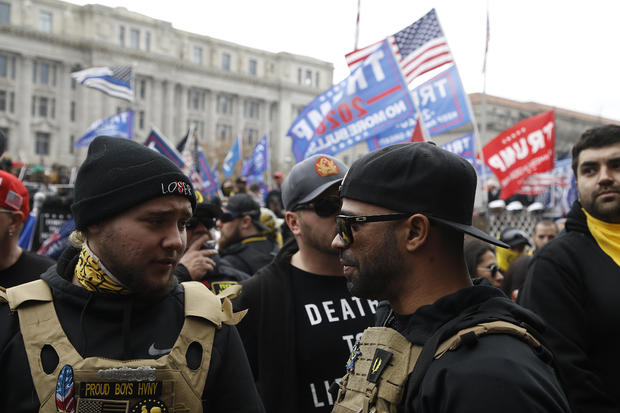 Tarrio is currently being held on a misdemeanor charge. The source said hate crimes charges were considered, but the source also said there was a lack evidence to support those charges. Tarrio was arrested by D.C. Metropolitan Police while leaving a D.C. airport in a vehicle, and he was also charged with being in possession of a high-capacity firearm magazine, which is a felony in D.C. A charging decision was pending.

Asbury United Methodist Church, which is on the District of Columbia Register of Historic Places and is the oldest Black church to remain on its original site, said its Black Lives Matter sign was burned in the street during pro-Trump rallies on December 12.

Tarrio told The Washington Post days after the incident that he had participated in the burning of the flag, but he insisted he hadn’t participated in a hate crime. He said he would surrender to authorities, plead guilty to destruction of property and pay the church the cost of the banner.

Asbury United Methodist Church replaced the stolen banner on December 18 and then held a prayer service outside the church, according to The Washington Post.

Tarrio said the Proud Boys were reacting to the stabbing of four members of its group outside a nearby bar. Metropolitan African Methodist Episcopal Church, another historically Black house of worship, also said a Black Lives Matter sign was taken as well. That church filed a lawsuit on Monday against Tarrio for the destruction of the banner.

01/05/2021 Lifestyle Comments Off on Proud Boys leader arrested in Washington, D.C.
Recent Posts
We and our partners use cookies on this site to improve our service, perform analytics, personalize advertising, measure advertising performance, and remember website preferences.Ok