The medicines regulator is seeking feedback on a proposal to legalise the active ingredients in ecstasy pills and magic mushrooms for mental health treatment.

Mind Medicine Australia, a not-for-profit that advocates for new treatments for depression and post-traumatic stress disorder, has asked the Therapeutic Goods Administration to allow psychiatrists to use MDMA and the hallucinogenic psilocybin in therapy sessions. 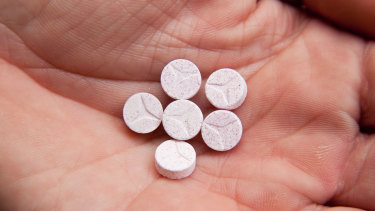 The TGA is undertaking a public consultation on the application, which would allow Australians with PTSD to undergo treatment with medical-grade MDMA, the active ingredient in ecstasy pills.Credit:Alamy

But the college of psychiatrists warns there is not enough evidence the drugs are safe.

The TGA is undertaking a public consultation on the application, which would allow Australians with PTSD to undergo treatment with medical-grade MDMA and those with depression to be prescribed psilocybin.

"A huge amount of people are on anti-depressants that are not working for the vast majority of patients," Mind Medicine Australia executive director Tania de Jong said. "We just don't have the treatments to help people get better. Most illnesses don't have to be a life sentence."

MDMA and psilocybin-assisted psychotherapy involves limited doses over two or three sessions of eight to 10 hours. Advocates claim this can "fast-track" psychotherapy to produce long-lasting changes.

But the president of the Royal Australian and New Zealand College of Psychiatrists, John Allan, said it would be "premature" for psychedelic medicines to be approved for general use.

While the college was supportive of a clinical trial being undertaken in Melbourne and understood the desire to relieve suffering, he said "the safety and efficacy have not been proven yet".

"I'm very concerned about people thinking this is a grand cure and safe and going out and practising in ways that aren't safe," he said, referring to the underground market for MDMA and psilocybin therapies.

Ms de Jong pointed to phase two MDMA trials in the United States that had found more than half of participants went into remission after undergoing the therapy, a significantly better outcome than conventional psychiatric drugs.

She said the drug enabled sufferers to experience a sense of connection that enabled them to "break out of their rigid and stuck thought patterns and start to become agents of their own healing process", likening it to "rebooting the hard drive" of a computer.

The US Food and Drug Administration has granted MDMA-assisted psychotherapy the status of a breakthrough therapy, allowing research to be fast-tracked and prompting optimism the drug could be approved there by 2021.

Ms de Jong said she believed MDMA and psilocybin would have a larger medicinal market than cannabis as "we have such a huge mental health crisis and the need is so great".

Associate Professor Allan said "only a few hundred people" had participated in the clinical trials undertaken to date in the US and Europe.

"Psychedelics have been around for some time. There's only more recently some promising research evidence, but it's too early to say they should be listed for general use," he said.

"It's just not proven yet, there just haven't been enough studies … The streets of medicine, and psychiatry in particular, are littered with great ideas that went wrong."

The TGA consultation closes on September 28, with an interim decision due in February.

Health Minister Greg Hunt declined to comment while Labor's health spokesman, Chris Bowen, said the Opposition "respects the independence and expertise of the TGA and looks forward to its advice on this proposal".

Greens mental health spokeswoman Rachel Siewert said the party welcomed new research into mental health treatments "and will be consulting with the sector and health professionals before taking a position on this".

09/01/2020 Lifestyle Comments Off on Regulator weighs push to legalise MDMA for mental health treatment
Recent Posts
We and our partners use cookies on this site to improve our service, perform analytics, personalize advertising, measure advertising performance, and remember website preferences.Ok