The drama between the ladies and Jennifer Aydin will pick right back up when filming for Season 12 commences on June 8.

The Real Housewives of New Jersey‘s cast will be adding a new face in Season 12. We don’t know her name just yet, but sources close to the show tell HollywoodLife EXCLUSIVELY that “there is one new lady who will be filming, and Dolores [Catania] knows her. But it’s too soon to know whether she’ll be full-time or not.”

Bravo had no comment on this reporting or any casting decisions for Season 12, but fans are expecting all of the core group to return. Melissa Gorga, Teresa Giudice, Margaret Josephs, Jackie Goldschneider, and Jennifer Aydin have remained the same cast for the past three seasons, so if anyone does join the group, it’ll likely shift the dynamic. 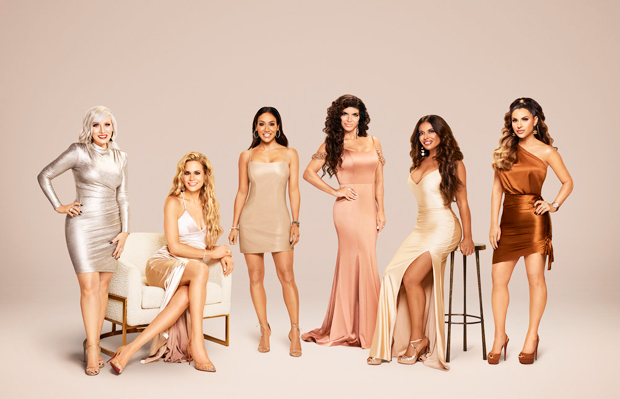 We’re also hearing that Jen’s drama with her co-stars will pick right back up when filming starts. “The ladies of RHONJ will start filming this Tuesday [June 8] and a few of them are surprised that Jennifer Aydin was asked to return,” our source added. “After the reunion, Jackie, Margaret and Melissa were none too pleased to find that out, as they are not particularly friends with her right now.  They are not looking forward to filming with her and haven’t seen or spoken to her since the reunion.”

Fans of the franchise may remember the reunion left off with Melissa, Margaret and Jackie not speaking to Jennifer after she made claims that Margaret, not Teresa, started the rumor about Jackie’s husband Evan Goldschneider cheating at the gym. Jennifer also came at Margaret after she admitted to the group that she slept with her former boss and Jen referred to her as “sloppy.” This isn’t the first time Melissa and Jen have had an ongoing feud over the last few seasons, but the latest spat was when Jen got into a huge social media war when Jennifer claimed Melissa sold fake bags at her store, Envy, while Melissa clapped back calling Jen “conniving and fake.”

While there’s a lot of drama involving Jennifer with most of the cast, Dolores is doing her best to try to mend the gaps between all of the ladies, as it’s been spilling into the husbands’ lives as well. “Dolores is the peace maker and is friends with everybody so she’s tried to help fix things but it hasn’t worked,” our source said. “This is where the drama will be picking up. The drama seems to be spilling over between the men, too, as Joe Gorga left Bill Aydin out of an upcoming event.”