All the comedic pieces are in place, from skipping lightness to ribaldry, and there's enchantment here galore: a keen sense of the play as a game, thanks to using teenaged actors to play teens. In fact, Damien Ryan's Sport for Jove production better serves the comedy than the tragedy – and that is not such crushing criticism as it may sound.

Romeo and Juliet could so easily have been full-blown comedy. Had Juliet awoken from her death-like stupor into the arms of a living, lusting Romeo, the work would have been a joyous precursor to Shakespeare's next, A Midsummer Night's Dream, with which it shares so much in poetic terms. Instead, having just knocked out the first of his three most lyrical plays, Richard II, he thought he'd have a proper crack at tragedy, albeit of a very different sort from that of the ancients or his contemporaries. The misadventures leading to the young lovers' deaths are more like tripwires in a cunningly plotted comedy, lacking the portentousness he was soon to master. 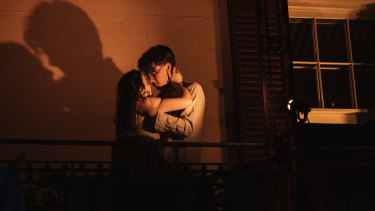 Claudia Elbourne and Oliver Ryan as the teenaged lovers.Credit:Seiya Taguchi

Ultimately the play is Juliet's to own, and Claudia Elbourne fully owns it for the first three acts, dancing lightly across the verse and sharpening the well-worn lines anew. She catches all the character's intrinsic sweetness and instinctive wisdom, and sometimes makes you catch your breath when innocence and singlemindedness are such ready bed-mates.

Ryan has not only found and fostered the ideal Juliet, he brewed the right love-at-first-sight chemistry in casting his 16-year-old son, Oliver, as Romeo. They say and mean the things love-sick teens would say – if, perchance, they happened to be penned by the greatest poet of all time. Just as any fleeting flashes of self-consciousness simply make their youthful love more real, so this gangly Romeo's ardour is more real than that of some older, suave seducer.

The director's other son, Max (14), is astonishingly precocious as Mercutio, a role that arguably trembles with more life-force than any Shakespeare had penned until that point. It has been said that the playwright had to kill off Mercutio, else he had stolen the play, but that's only a danger with an inadequate Juliet, and this central trio was in balance. That said, Mercutio's miraculous "Queen Mab" speech could have been slower in delivery and less hectic in its business.

The Nurse's big speech, reminiscing about Juliet, was also somewhat obscured in mirthful action. An actor massively affects how sympathetic the Nurse – intriguing in both senses – is, and Bron Lim's version developed more complexity as the play unfolded.

Ryan's theatrical flair and directorial flourishes (with Verona a feuding little village) are his strongest since 2016's superlative Antigone, and yet the final two acts don't quite work. This may be the downside of using such young actors: they make light work of playfulness, but anguish becomes heavier going. Once Mercutio is dead and Romeo banished, both Elbourne and Oliver Ryan are hard-pressed to calibrate the expression of their torment. They don't let the audience's imagination fill in any blanks the way they do with the comedy. If they can find more lines to underplay, the sky's the limit for the star-rating the production might deserve.

Among the rest of the vast cast (18), a special nod to Jay James-Moody's Peter, which whets the appetite for his Feste in the other half of Sport for Jove's summer season, Twelfth Night.