RYANAIR is "ripping off customers" by charging them up to six per cent more for flights paid in pounds, rather than in euros, according to a Which? investigation.

The consumer group found that the budget airline charged a family of four an extra £30 when using its "dynamic currency conversions" option when booking online. 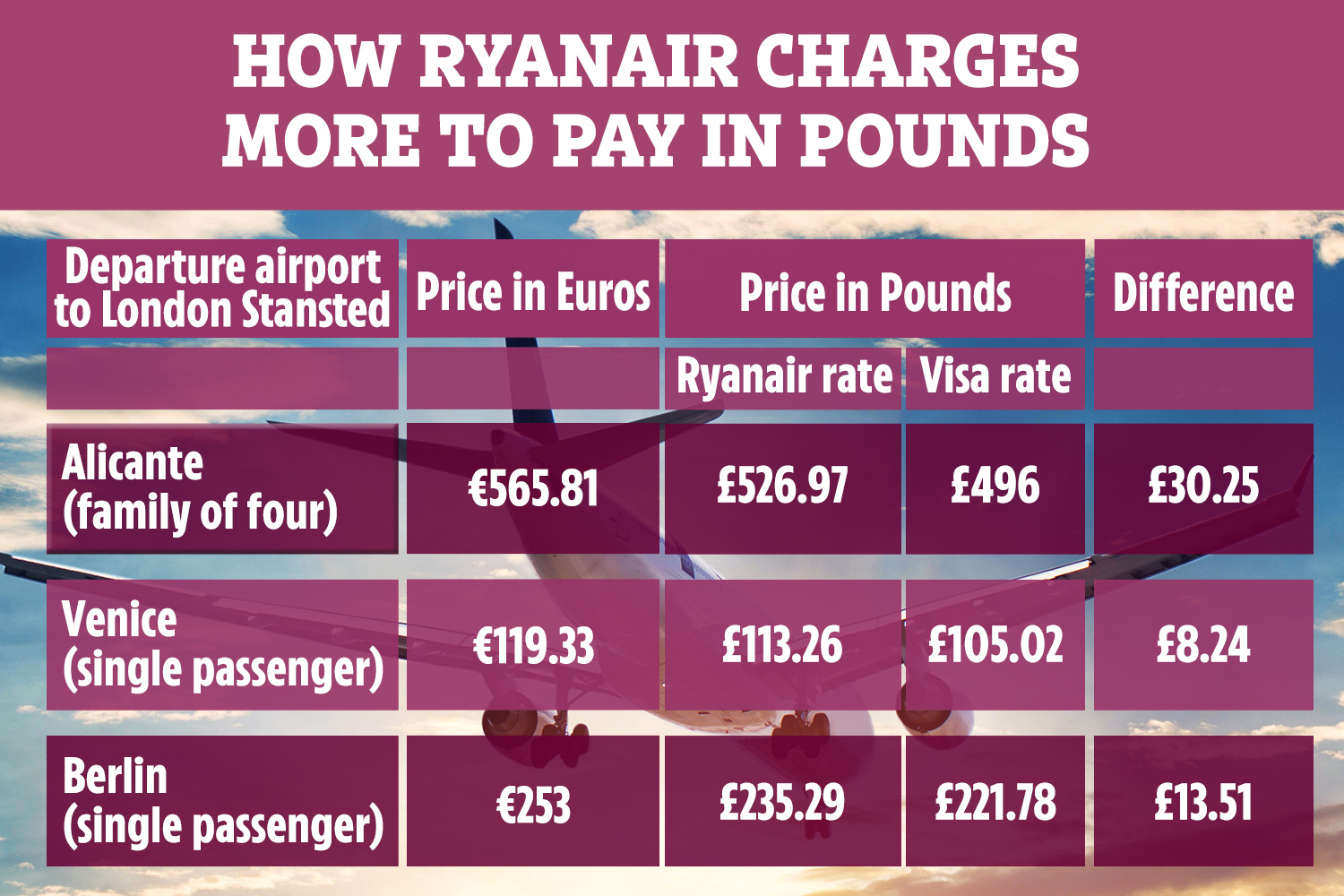 This is when the website displays ticket prices in the currency of the departure airport, for example, flights leaving from Italy or France will be displayed in euros.

But during the booking process it automatically switches the price into pounds using its own exchange rate.

Customers have the option to opt out of paying in pounds but it's hidden behind a "more information" button and this includes a warning that flights will cost "significantly more".

But a random spot check by Which? Travel found that flights were actually cheaper when paid for in euros.

How to avoid being hit by Ryanair’s exchange rate

LIKE many other airlines, Ryanair uses “dynamic currency conversion” when it displays travel fares.

This means that it will advertise rates in the currency of the departing airport which may be cheaper than it costs in pounds.

But when you enter your card details to pay, it will switch the price into pounds using its own conversion rate which can bump up the price.

To avoid being hit with the price hike, scroll down on the payment page and click on the “more information” button.

Tick the “opt out” button which will stop Ryanair from using their own exchange rate.

A flight from Alicante to London Stansted airport for a family of four was advertised as €565.81 but when it came to entering in payment details, Ryanair switched the currency to pounds making the total fare £526.97.

Ryainair's exchange rate was of 93p per euro compared to Visa's 88p per euro on the same day.

A family fare from Nice to London added an extra £21 to the bill after the currency was converted, while The Sun found that a single flight from Venice cost £8.24 more if you use Ryanair's exchange rate.

Which? research found that a single adult fare from Berlin to London would have cost £235.29 with Ryanair’s exchange rates – compared to £221.78 with Visa, adding almost £13 to the cost.

When is the best time to book flights and save cash?

WHICH? has crunched two years worth of data from comparison site Skyscanner to work out when it is cheapest to book flights for key periods. Here's when you should book and how much you can save:&nbsp;

August Bank Holiday – Book three months early and flights should be 8 per cent cheaper on average. Book on June 3.

Christmas – For Christmas markets or some winter sun, book three months ahead for 10 per cent cheaper flights. Book on September 25.

Easter – Forget the sales, at Christmas you should be looking for your Easter break to save 16 per cent on average. Book on December 15.

Summer Break – For savings of up to 7 per cent book your summer holiday more than six months in advance. Book on January 4.

Early May Bank Holiday – Book three months in advance to save 14 per cent on flights. Book on January 13.

Cheapest flights all year – People who book in late January for a trip on April 27, after Easter school holidays, get 19 per cent savings. Book in January.

Late May Bank Holiday – Book three months ahead to save 12 per cent. Book on February 24.

*Figures based on return economy tickets

Budget airline Aer Lingus runs a similar system at the checkout but Which? says it makes the last minute currency conversion and the implicated costs much clearer.

It's not the first time Ryanair has been called out for its rip-off rates.

Last year, The Sun reported Ryanair were using a higher currency conversion rate than average exchange rates as it was out of date.

Caroline Normand, from Which? said: "This cynical and misleading pricing trick is one of the clearest examples of a rip-off we have seen – but Ryanair has been allowed to get away with it due to a lack of action from the Civil Aviation Authority.

"If the regulator is committed to helping improve the experience of passengers, it must clamp down on this practice before thousands more holidaymakers are caught out this summer."

A spokesperson for the airline said: "Ryanair’s currency conversion presentation is fully transparent and complies with all applicable EU and national laws on consumer protection.

"Customers have the option of paying in the currency of their payment card which gives absolute certainty of the final payment amount."