Liberal senator Jim Molan will announce he has an aggressive form of cancer and is stepping away from parliamentary duties while he has further medical tests.

The former senior soldier is expected to make make the announcement on Monday afternoon. 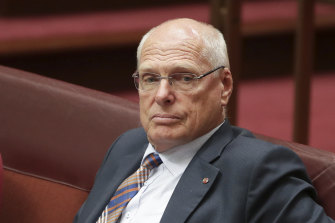 Senator Jim Molan is stepping away from parliamentary duties after being diagnosed with cancer.Credit:Alex Ellinghausen

In a message to colleagues, Senator Molan said he was last week diagnosed with an “aggressive form of cancer”.

“I will be taking leave from the Senate for further testing to confirm the prognosis, and to commence treatment,” he said.

“Although I personally am stepping back for a while, my office will remain open and fully operational.

“My team will continue to work hard alongside my colleagues in the Morrison government on the issues that matter.

“My commitment to serving you, the people of NSW and Australia, has not wavered. Whilst this news has come as a shock, I have many reasons to be positive. I am receiving the best possible care from my clinicians, and have the love, support and prayers of my family. I have never been afraid to fight the battles that need fighting, and this is no exception. I thank you for your support, and we ask for privacy at this time.”