“I was just so madly in love with him as an actress to start with that he probably could have hit me in the head with a hammer and I would’ve been like, ‘Oh yeah!'”

Sharon Stone says the best on-screen kiss of her career was with Robert De Niro.

During a virtual appearance on “Watch What Happens Live” Tuesday night, the actress shared details about her “fabulous” kiss with her “Casino” co-star, admitting she was “so madly in love” with De Niro at the time. 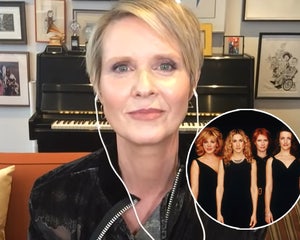 How Does Cynthia Nixon Feel About Replacing Kim Cattrall for Third Sex and the City Movie?

“Well, Robert De Niro was for sure the best kisser. Bob was far in a way the best kisser,” began Stone, 62, to which host Andy Cohen chimed in to praise her work in the 1995 crime drama.

“[De Niro] was the actor that I admired the most,” Stone continued. “My whole career…I just wanted to be able to sit across the table from Robert De Niro and hold my own.”

The “Basic Instict” actress, who was joined by her “Ratched” co-stars Sarah Paulson and Cynthia Nixon, said her kiss with De Niro was even more special because she “held him in such extraordinary high regard.”

“It was the pinnacle of the kissing moment for me,” Stone explained. “There was so much attached to it.”

“I was just so madly in love with him as an actress to start with that he probably could have hit me in the head with a hammer and I would’ve been like, ‘Oh yeah!'” she quipped. “It was pretty fabulous.”

Stone concluded, “I don’t know if I could compare anything else to that, everything else was kind of meh.”

Stone, who received her first and only Oscar nomination for her role as Ginger McKenna in “Casino,” revealed that starring alongside De Niro was her “secret goal” as an actress.

“The fact that I got to do that was everything to me,” she said during an appearance on “Live with Kelly and Ryan” back in 2018. “The fact that I even got to even audition and to do that was such a big deal to me. And then when I got the part, you know, I really hounded them to death to really let me go for it.”

“I put my all into it because it really was my dream,” she added.

Got a story or a tip for us? Email TooFab editors at [email protected].