And it's not an uncommon design to pop up in your change either. 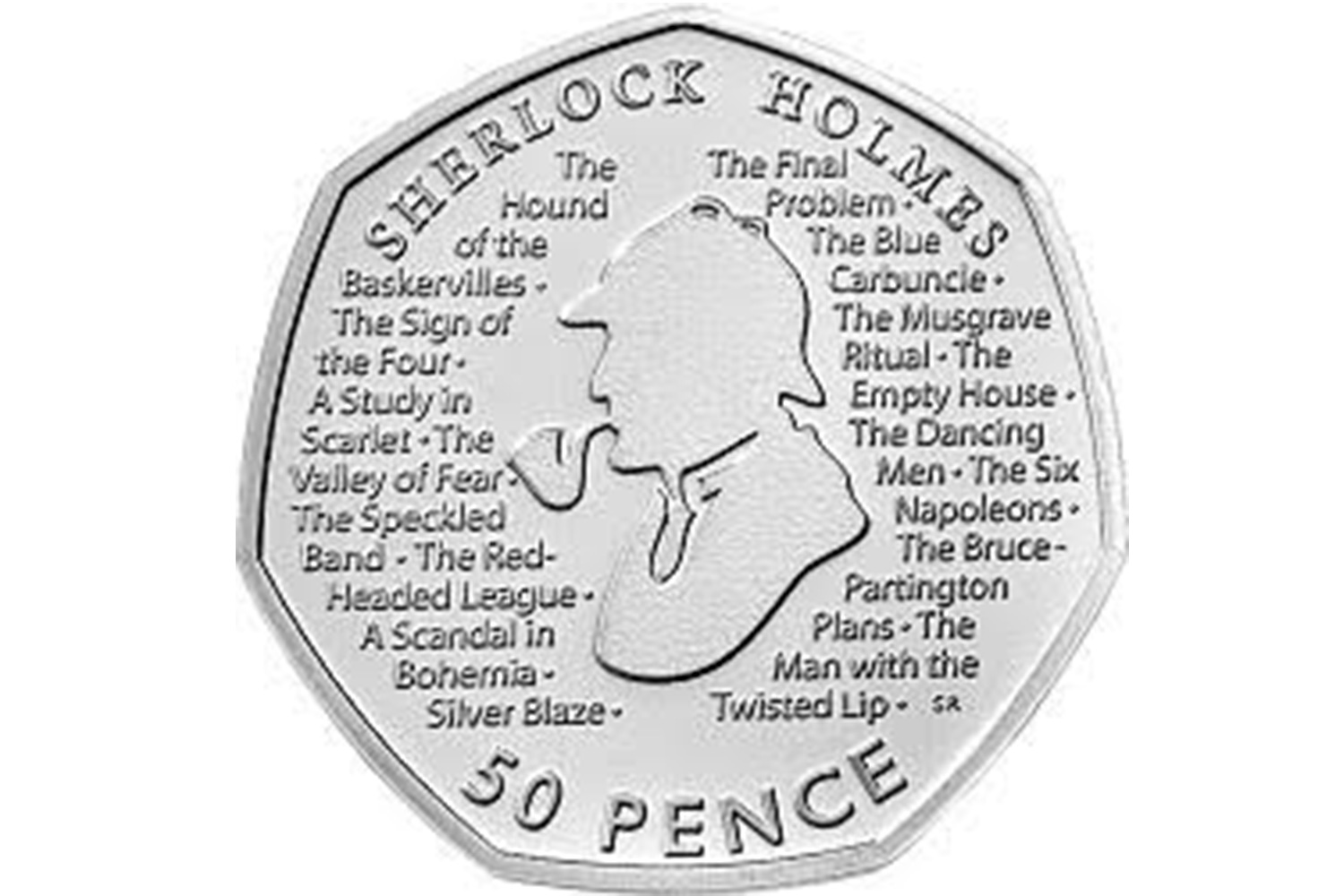 The coin was released into circulation in 2019 on what would have been the 160th birthday of Arthur Conan Doyle's, the author who created Sherlock Holmes.

The writer is best known for his popular detective stories, so what better way to commemorate the author's most famed work than with a coin of the character and book titles to match.

The 50p coin was designed by Stephen Raw and features the profile of the fictional detective, who's wearing his iconic deerstalker hat and smoking pipe.

It's also got tiny inscriptions of the titles of books in the Sherlock Holmes series behind the silhouette too.

The obverse features the fifth portrait of Her Majesty the Queen, designed by Royal Mint engraver Jody Clark, as is standard with all modern 50ps.

But while the design is different to your regular 50p, we take a look at exactly how much it's worth, and whether the coin is as rare as you think.

How rare is the Sherlock Holmes 50p?

According to Change Checker the Sherlock Holmes 50p has a circulating mintage of 8,602,000.

That's means there are almost 8.4 million more knocking about than the official rarest 50p coin, the Kew Gardens 50p.

It's only got a scarcity score of one on Change Checker's latest index.

The scarcity index ranks each of the coins between 1 and 100 to indicate how hard they are to find, as well as how in demand they may be.

The higher the number, the scarcer the coin and therefore it's more likely to be more valuable than others.

So, coming in at 65th place on the November update, the Sherlock Holmes 50p certainly isn't a top scorer.

How much is the Sherlock Holmes 50p worth?

Sadly, as the rare coin isn't in fact that rare, it doesn't hold much resale value.

One circulated copy of the coin has only sold for £1.85 on eBay – and that's the highest The Sun has found recently.

While that does make it almost four times more valuable than its face value, it's not as much as we have seen more popular rare coins go for on the online auction site.

But when you're buying and selling on eBay you have to keep in mind all those hidden charges too, so when you add up sellers fees and postage, to name a few, you might only earn as much as 50p back from your sale – or face value.

Coin Hunter explains that of the 136 50p, £2 and 10p coin designs in circulation today, 41 of those are only worth their face value – with the Sherlock Holmes unfortunately falling into that category.

That means unless you find a buyer willing to pay more, then the 50p coin could be better spent on something from the corner shop than being listing for auction.

That being said, a few years back when the coin was first released there was huge demand for it.

One sold for a whopping £500 back in 2019, while coin experts valued it to be "worth up to ten times its face value" at the time too.

How about the other coins in my change – can I check if they're worth anything?

Usually any coin with a commemorative print is desirable for collectors.

But a low mintage or an error can often drive up the price someone might be willing to pay for what you've found in your spare change.

If a coin, like the Sherlock Holmes one, has a high mintage figure then it's a bit easier to find one in your own wallet.

But sadly that means it's not as sought after, as it could be easier to come across when the cashier hands you back your change, than seeking one out at auction.

You can check how much a coin will typically go for on eBay though.

Sometimes a coin may not have sold for the amount is was listed for, andfakes circulate online too, so keep this is mind.

If you're worried, you can get your change verified by The Royal Mint, that'll also help reassure buyers that they're paying for the real deal – and you may even be able to hike up the price a bit if you go to sell.

You'll also find that online tools from change experts like Coin Hunter are helpful to see how much it could be worth.

Rare coins and valuable notes – is yours worth a mint?

11/18/2021 Lifestyle Comments Off on Sherlock Holmes 50p coin: how much is it worth?
Recent Posts