Aged care workers said the government’s response to the royal commission gave them what they expected: disappointment.

Workers Nicole, Jen, Jude and Donna said they all do their jobs because they care for their residents, not for the money. 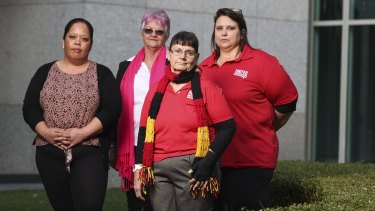 Aged care workers Nicole, Jude, Jen and Donna are disappointed the budget did not include higher wages.Credit:Alex Ellinghausen

“Most of us are on $20 to $23 an hour and that is unfair. Why? A lot of people are having to have two and three jobs. It’s disrespectful, and it’s degrading,” said Jude, who has worked in aged care for 48 years and did not give her surname so as not to identify her employer.

Donna, who has worked in aged care for six years, said those wages won’t attract people to the workforce.

“Only the people that really legitimately want to be there will do it for that wage,” she said.

The government unveiled their $17.7 billion, five-year plan to overhaul the aged care system in the budget on Tuesday in response to the Royal Commission into Aged Care Quality and Safety.

The response included $3.2 billion to increase minimum care minutes to 200 per resident per day, including 40 minutes with a registered nurse, and funding for almost 34,000 new training spots and 13,000 more home care workers.

“A huge part of the aged care package is continuing investing in creating the workforce, some 30,000 skilled places to get the workforce we need,” he said on ABC radio on Wednesday.

“Our focus here is very important; that Australians can age with dignity and respect. That’s what these changes are designed to achieve.”

But Health Services Union secretary Gerard Hayes said the government had missed a good opportunity to fix aged care worker wages, and the Commonwealth should support the Fair Work Commission case to increase the award wages.

“You can intervene in that manner and say, ‘hey, we can resolve the pay issue’. You don’t have to sit back and wait for the independent arbitrator to make a decision,” he said.

Not-for-profit aged care provider HammondCare has confirmed the organisation is going to lodge a submission with the Fair Work Commission in support of the wage increase for workers.

Australian Nursing and Midwifery Foundation federal secretary Annie Butler urged the government to support the workers in their push for higher wages.

“We need the government as a central part of that process, as the funder of the system. They need to get involved,” she said.

“How does Scott Morrison think his aged care crisis is going to get resolved when aged care workers are some of the worst-paid people in the Australian economy?” she said. “These workers undertake complex and important work every day. It’s emotionally very difficult. And these workers get paid about the same as a person stacking shelves in a supermarket.”

United Workers Union national president Jo-anne Schofield said the royal commission highlighted the sector would need tens of thousands of workers in the next five years.

“If we don’t have better wages, and we don’t have jobs where workers will get guaranteed hours that they can live on, how are we going to attract workers?” she said.

Care worker Jen said having more staff would make an enormous difference for the residents.

“It’d be quality for the residents in the last chapter of their lives, we could spend time with them, doing their hair, sitting and letting them tell us a story,” she said.

05/12/2021 Lifestyle Comments Off on ‘Some of the worst-paid people in the economy’: Workers miss out in aged care reform
Recent Posts