Up, up and out of the closet!

The new Superman, Jonathan Kent — who is the son of Clark Kent and Lois Lane — will soon begin a romantic relationship with a male friend, DC Comics announced Monday.

That same-sex relationship is just one of the ways that Jonathan Kent, who goes by Jon, is proving to be a different Superman than his famous father. Since his new series, Superman: Son of Kal-El, began in July, Jon has combated wildfires caused by climate change, thwarted a high school shooting and protested the deportation of refugees in Metropolis. 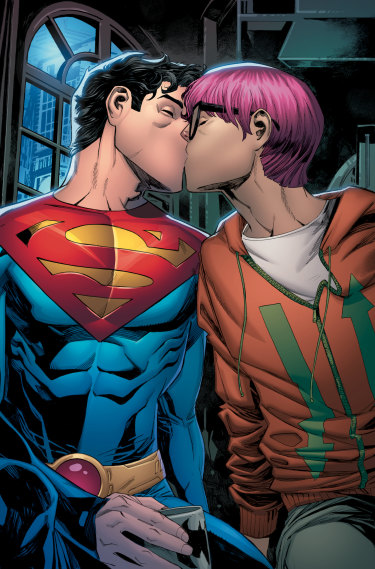 Jonathan Kent, the new Superman, who is the son of Clark Kent and Lois Lane, shares a kiss with his friend Jay.Credit:John Timms/DC Comics via The New York Times

“The idea of replacing Clark Kent with another straight white saviour felt like a missed opportunity,” Tom Taylor, who writes the series, said in an interview. He said that a “new Superman had to have new fights — real-world problems — that he could stand up to as one of the most powerful people in the world.”

The coming out of Superman, perhaps the most archetypal American superhero, is a notable moment even in an age when many comics have embraced diversity and are exploring pressing social issues. Batman’s sidekick, Robin, recently acknowledged romantic feelings for a male friend (not Dick Grayson — who was Batman’s partner for over four decades — but Tim Drake, a later replacement; there are multiple Robins just as there are multiple Supermen). And a new Aquaman comic stars a gay Black man who is positioned to become the title hero.

It has been a steady evolution for an industry that had moved to censor itself in a number of ways after Seduction of the Innocent, a 1954 book by psychiatrist Fredric Wertham, raised concerns about sex, gore and violence and suggested a link between reading comics and juvenile delinquency. In one section, Wertham described Batman and Robin as “a wish dream of two homosexuals living together.”

The book helped inspire congressional hearings and led to the creation in 1956 of the Comics Code Authority, in which the comics industry set standards on what comics could depict. The character of Batwoman was introduced that year as a love interest for the Caped Crusader. She eventually fell into obscurity but was rebooted in 2006. (As part of her new backstory, she leaves the military because she refuses to lie about being a lesbian.)

One of the earliest mainstream comics to feature gays or lesbians appeared in 1980. It was not a positive portrayal. In the story, Bruce Banner, the alter ego of Marvel’s Hulk, is at a YMCA, where two gay men try to rape him.

Things had started to evolve by 1992, when Northstar, another Marvel hero, came out — an event that was praised in an editorial in The New York Times. “Mainstream culture will one day make its peace with gay Americans,” the editorial said. “When that time comes, Northstar’s revelation will be seen for what it is: a welcome indicator of social change.”

Though Superman is not the first LGBTQI hero and will not be the last, comics experts said that there was something particularly momentous about Superman coming out. 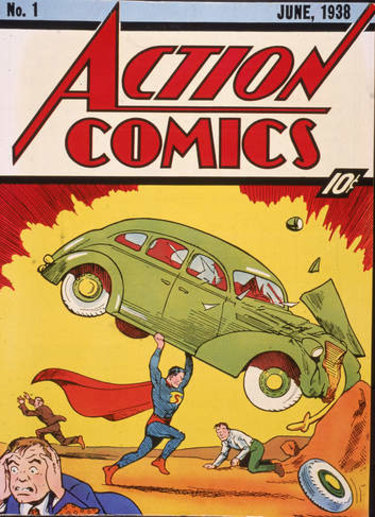 Cover illustration of the comic book Action Comics No. 1 featuring the first appearance of the character Superman in June 1938.Credit:Hulton Archive/Getty Images

“It is not Northstar, who your aunt has never heard of,” said Glen Weldon, the author of Superman: The Unauthorised Biography, and the co-host of the Pop Culture Happy Hour on NPR. “It’s not Hulkling. It’s not Wiccan. It’s not Fire and Ice. It’s not Tasmanian Devil. It is Superman. That counts for something — just in terms of visibility, just in terms of the fact that this is going to attract attention.”

There has been some blowback to the recent evolution charted by comics. In August, as rumours about the Superman development began to circulate, a commenter on one website complained that “Marvel and DC have ruined their characters to please the woke mob, who don’t even buy comics.” But others have cheered the news: “It’s nice to see queer superheroes being more mainstream now, I’m very happy to see people like me being the main characters,” a commenter wrote on another site.

Jonathan and Jay Nakamura met in an August story during the new Superman’s ill-fated attempt to establish a secret identity and attend high school. Last month, Jay, a budding journalist, met Jonathan’s parents — and was awe-struck by Lois Lane.

Jonathan and Jay will share a kiss in a story that will be published next month. This month, readers will discover that Jay has special abilities. “Jay could be the only person in Jon’s life that he does not have to protect,” Taylor said. “I wanted to have a really equal, supportive relationship for those two.”

The editors at DC were already considering similar lines of the development for the character and were supportive, he said.

“I’ve always said everyone needs heroes, and they deserve to see themselves in their heroes,” Taylor said. “For so many people, having the strongest superhero in comics come out is incredibly powerful.”

This article originally appeared in The New York Times.

The Booklist is a weekly newsletter for book lovers from books editor Jason Steger. Get it delivered every Friday.

10/11/2021 Lifestyle Comments Off on Superman comes out, as DC Comics ushers in a new man of steel
Recent Posts