The old theatre maxim – never work with animals or children – is broken only by the brave. Joseph O'Farrell (JOF) has always been an intrepid soul, but perhaps not even he could have anticipated the terrors that would be unleashed in The Cabin, a theatrical horror show written by kids for adults.

More than 200 Australian and British students contributed to this work of comedy-horror, through workshops and residencies. They've made a Frankenstein's monster of a play, stitching schlocky genre tropes together into an appalling corpse, reanimated by the spark of meta-theatrical absurdity. 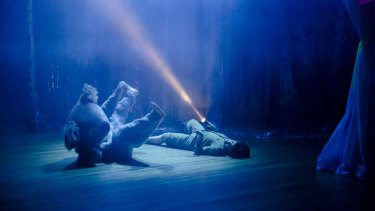 If children with cereal boxes on their heads will make you want to run screaming, give this one a miss, because that's the tip of the iceberg in a show that offers an entire Village of the Damned of thrills. 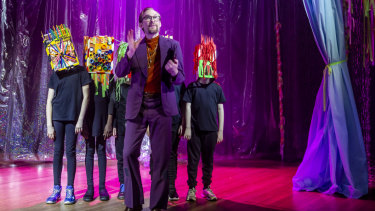 Children with boxes no their heads are the tip of the spooky iceberg.Credit:Bryony Jackson

There's a mash-up of Waiting for Godot and Metallica, and the eerie hilarity of
"Frankenstein on the Beach" (based on the experimental classic Einstein on the Beach), in which children's choirs sing Philip Glass opera while adults work achingly slow physical theatre (a piss-take of that master of the American avant-garde, Robert Wilson) into a premonition of zombie apocalypse.

There are cute but creepy video montages where urban monsters crawl from toilets and rubbish bins. 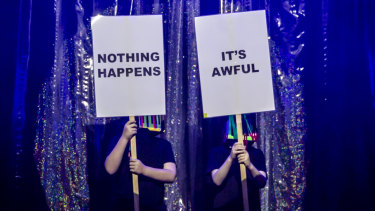 The show explodes into a splatter-horror finale, complete with a chilling reveal and bucketloads of fake gore.

I'm not sure anyone but theatre insiders will get much from the more pointed in-jokes. Still, The Cabin's uninhibited blend of humour and horror has broad appeal.

07/08/2019 Lifestyle Comments Off on The Cabin: a theatrical horror show written by kids for adults
Recent Posts