Returning Victorian Opposition Leader Matthew Guy carries significant baggage into his contest with Premier Daniel Andrews for premier at the election next year.

In his time as planning minister in the Baillieu and Napthine governments between 2010 and 2014 he was caught up in a string of controversies involving Liberal Party figures, donors or donations. 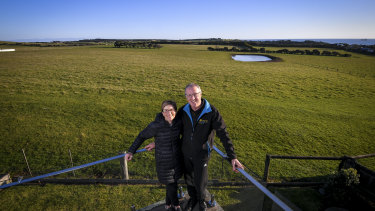 Land owners Karen Green and Robert Newall and, in the background, the farmland Matthew Guy briefly rezoned for housing.Credit:Eddie Jim

The botched rezoning of farmland on Phillip Island in 2011 cost taxpayers millions of dollars and left a major question hanging over Mr Guy’s judgment.

In 2014, then ombudsman George Brouwer slammed the Coalition government’s handling of the Ventnor matter, but with limited powers to investigate politicians, his report focused on the public service rather than the minister’s own decision-making.

Mr Brouwer also stressed that then-minister Mr Guy refused to hand over documents. Many of those documents were controversially released by the state government just months before the 2018 election, showing Mr Guy spent millions of dollars of taxpayers’ money to confidentially settle a lawsuit over the decision because he feared he would lose his job if the matter went to court. 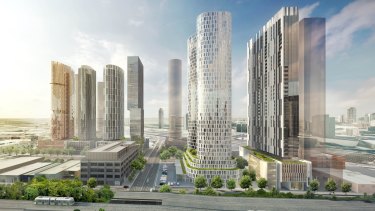 Six towers proposed for Fishermans Bend, which were submitted in a single planning application, by a syndicate of landowners.

In July 2012, Mr Guy stunned the political and property worlds when he, in effect, doubled the size of the Melbourne CBD by rezoning a 250-hectare industrial area south-west of the CBD and dubbing it “Fishermans Bend”.

The decision to declare the precinct a “Capital City” zone triggered a massive hike in land values, a frenzy of high-rise apartment tower applications and approvals, and windfall paper profits to landowners and speculators, among whom were some senior Liberal Party members and donors, including the party’s honorary federal treasurer Andrew Burnes.

At the time there was no binding master plan nor height limits, nor any mechanism to capture any of the uplift in land values – money that could have helped pay upfront for the infrastructure and services.

In 2015 a Labor-appointed committee found Mr Guy’s Fishermans Bend move was “unprecedented in the developed world in the 21st century”.

Confidential departmental briefs from early 2011 to 2013 revealed how senior bureaucrats had urged Mr Guy to buy key strategic sites before allowing redevelopment of the precinct. But, over 15 months, at the behest of the minister’s office, the department gradually dropped its demands. 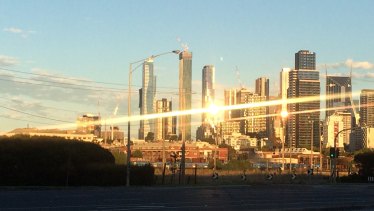 In 2013 RMIT planning academic Michael Buxton nicknamed Mr Guy “Mr Skyscraper” after he ticked off a slew of towers in central Melbourne.

In 2013 Mr Guy inserted a clause into the Melbourne Planning Scheme, at odds with a long-standing planning rule for Melbourne, allowing a skyscraper on the site to be built overshadowing the Yarra River.

The Andrews government’s Planning Minister, Richard Wynne, later knocked back an application by Fragrance for an 82-level tower on the site, and reversed Mr Guy’s rule change that allowed the overshadowing of the Yarra.

Despite a Baillieu government ban on fundraising at the time, Mr Guy attended a secret fundraising dinner in 2011 with leading Melbourne developers, some of whom were seeking planning approvals.

When The Age revealed the dinners in 2013, a spokeswoman for Mr Guy said the minister was told that the developers had not paid to attend the dinners.

She stressed that he had rejected some of their planning applications.

Developers and landowners who had tipped thousands of dollars into Liberal Party coffers were among the big winners from Mr Guy’s opening of green-wedge areas and farmland to development on Melbourne’s fringe in 2012. 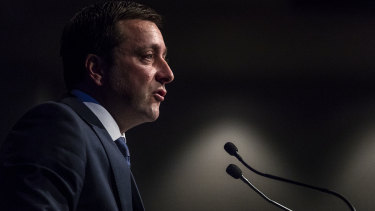 Among those celebrating the expansion of the city’s boundary were the owner, the developer and the lobbyist connected to an egg farm known as Brompton Lodge in the City of Casey.

In 2011, The Age revealed that the trio – farmer Peter Carpenter, developer Watsons, and lobbyist and former Liberal MP Geoff Leigh – were among those poised to share in a $500 million bonanza if the property was rezoned and developed.

At the time Mr Carpenter told The Age he had met Mr Guy, then shadow planning minister, twice at Liberal fundraisers before the 2010 state election.

In August 2017, The Age revealed that Mr Guy had dined on lobster and Grange wine with the alleged boss of the Victorian mafia, Tony Madafferi, and relatives in Victoria in April that year. 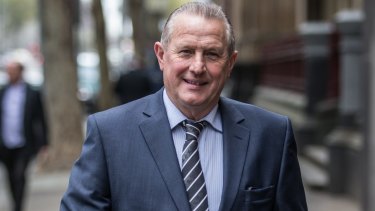 A Liberal insider had sought to use the dinner to extract donations from Mr Madafferi and his relatives and funnel them into party coffers. Mr Guy insisted he knew nothing about donations.

Insiders insisted no particular policies were discussed at the dinner, but The Sunday Age later revealed it occurred at the same time Mr Madafferi was lobbying behind the scenes to be allowed to develop his 60 hectares of green-wedge land in Keysborough in Melbourne’s south-east.

Property experts say that such an approval would be worth at least $120 million to Mr Madafferi.

In 2017 The Age revealed how an invoice for $10,000 was issued to give a developer exclusive access to the then planning minister Mr Guy in a private penthouse.

An invoice was issued by deputy Liberal leader David Hodgett in 2013, directing the developer to place a $10,000 donation into Mr Hodgett’s electorate branch account for “sponsorship” of an “industry forum”.

In reality the industry forum was an intimate lunch at a private penthouse attended by two developers with Mr Guy and staffers.

Leaked Liberal emails revealed that at the lunch, plans by the developer to progress an inner-Melbourne development were discussed with Mr Guy.